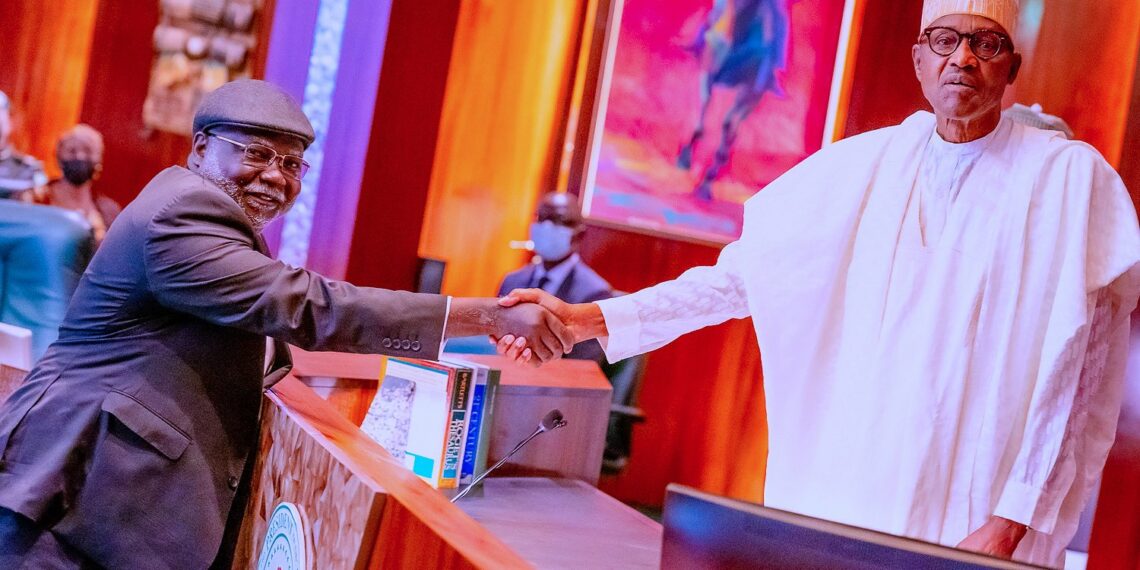 “I am therefore constrained to accept his retirement, albeit with mixed feelings," President Buhari says.

President Muhammadu Buhari says he is constrained to accept the resignation of the Chief Justice of Nigeria (CJN), Muhammad Tanko, on health grounds.

The president stated this while swearing in Justice Olukayode Ariwoola as acting Chief Justice of Nigeria in the State House, Abuja, on Monday.

Mr Buhari said: “Ordinarily, he (Tanko) was scheduled to retire from the Supreme Court on the last day of 2023.

“Unfortunately, as no man is infallible, ill-health has cut short Chief Justice Tanko’s leadership of the Nigerian Judiciary at this time.

“I am therefore constrained to accept his retirement, albeit with mixed feelings. Much as one may wish that the Chief Justice of Nigeria Muhammed Tanko is able to fully serve his term in office, it presupposes that he is able to perform the functions of the Office without let, hindrance or any form of disability.

“The instant resignation of Justice Tanko is however envisaged under Section 231(4) of the 1999 Constitution as amended which contains provisions relating to vacancy and the occupant of the Office of Chief Justice of Nigeria being unable to perform the functions of the Office for any reason.’’

According to the president, under a constitutional democracy like ours, government powers and responsibilities are clearly allocated and shared among the three tiers; the Executive, the Legislature and the Judiciary.

He stated that the three organs must work harmoniously and optimally in accordance with their respective Constitutional mandates.

He noted that Nigeria’s Judiciary under the leadership of Mr Tanko judiciously exercised the judicial powers of the Federation.

The president added that Mr Tanko’s era witnessed several landmark, jurisprudential and policy decisions by the Supreme Court, and by extension other courts established by the Constitution.

“CJN Tanko dealt firmly with the issue of reckless and indiscriminate grant of ex-parte Orders that was assuming serious dimensions.

“History will be kind to Justice Tanko Muhammed for his modest contributions to Nigeria’s Judiciary, the strengthening of our democracy and national development,’’ he said.

The president used the opportunity to call on the judiciary not do anything to fail the ordinary people of Nigeria which may make them lose confidence in the justice system in the country.

“Our Nation is approaching a critical general election in 2023, the Judiciary must not do anything to fail the ordinary people of Nigeria which may make them lose confidence in the Judiciary,’’ he said.

Mr Buhari reiterated his administration’s commitment to ensuring “the independence of the Judiciary and will not do anything nor take any steps to undermine your independence.

“We shall uphold the Constitutional provisions on the Rule of Law and the principles of Separation of Powers.’’

The News Agency of Nigeria (NAN) reports that the president honoured Mr Tanko with the Grand Commander of the Order of the Niger, (GCON).

“In the circumstances, and as nature abhors a vacuum, I hereby invite Honourable Olukayode Ariwoola JSC, being the next most Senior Justice of the Supreme Court, to come forward to take the Judicial Oath as Chief Justice of Nigeria in an Acting Capacity, pursuant to Section 231(4) of the 1999 Constitution (as amended),’’ he said.

Mr Ariwoola, who later spoke to State House correspondents, said he would uphold the constitution of the country while discharging his duties.

He said: “What Nigerians should expect from me is to comply with, preserve, abide by and protect the constitution of the Federal Republic of Nigeria – that is what I will do essentially with the cooperation of my brother Justices of the Supreme Court.

“We shall not fail Nigerians.”

He dismissed as false the purported controversy surrounding the Supreme Court occasioned by petitions reportedly written against the immediate past CJN (Tanko), saying “there is no controversy whatsoever’’.

He, however, added that what transpired shortly before the change of guard at the apex court was an internal memo of the Supreme Court, written directly to Tanko.

According to him, the matter is already being resolved.

“There is no controversy in the Supreme Court, we are one with the Chief Justice and that is why you heard the President said his Lordship (Justice Ibrahim Tanko) is disengaging on the grounds of ill health.

“It was an internal memo of the court; it was not a petition, it was not a letter. It was addressed by the brother-Justices of the Supreme Court and presented to his Lordship directly.

“They were issues to be resolved among Justices and we have started resolving them,” he said.

Fourteen Justices of the Supreme Court had on June 20 written a protest letter to the then CJN Tanko, lamenting the difficulties they were facing in carrying out their duties.