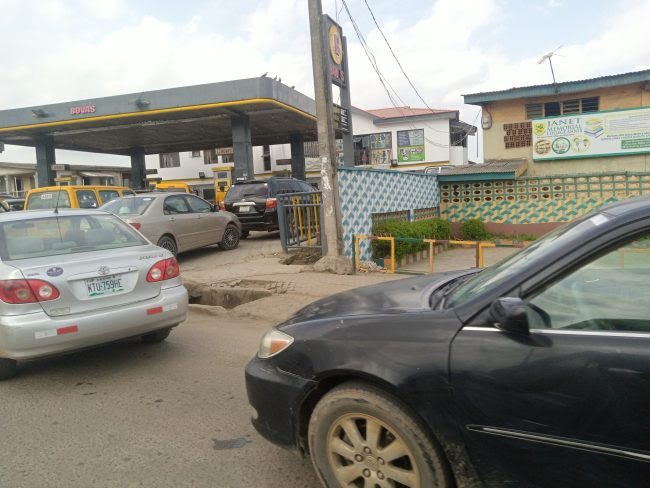 Independent marketers say they are operating in a hostile environment

Fuel queues which returned to several South-west states have spread to Lagos following the decision of some members of the Independent Petroleum Marketers Association of Nigeria (IPMAN) to shut down their operations.

Akin Akinrinade, chairman, IPMAN, Lagos Satellite Depot, Ejigbo, who confirmed the development to journalists in Lagos, said the members took the decision because they could no longer operate at a loss.

Mr Akinrinade said while the government had fixed N165 per litre as the pump price of Premium Motor Spirit (PMS), the current realities in the market showed that the minimum the product should be retailed at the stations should be N180.

According to him, the current scarcity being witnessed in Lagos is because the majority of petrol stations in the state are owned by IPMAN members who are finding it difficult to operate in a hostile environment.

He said: “As you can see, the queues are back and this is the second time we are witnessing it this year.

“However, this one is peculiar in the sense that for a particular reason, IPMAN members decided to shut their stations.

“This is not because we are on strike, but because we can no longer do business under this condition.”

Last week, long queues returned to filling stations in Ogun, Oyo and Ekiti as most of them remained shut due to scarcity of petrol.

Mr Akinrinade said IPMAN members ought to be getting supply from the Pipelines and Product Marketing Company (PPMC) and had made payments of over N1 billion since October 2021.

He said the products were yet to be delivered forcing members to patronise private depots for products while at the same time servicing loans borrowed from banks for their money with PPMC.

“Now, these private depot owners have increased the ex-depot price of PMS from N148.17 to N162 per litre. That is the amount they are selling to us,” he said.

“When you factor in the handling charge, transportation and running cost of our stations, you will see that even within Lagos, the minimum we can retail petrol is about N180 per litre.

“We want Nigerians to know that IPMAN members are patriotic citizens and we are not out to sabotage the effort of government because we know this hike in petroleum products prices is not peculiar to Nigeria.

“The ongoing conflict between Russia and Ukraine has disrupted the supply chain and the Nigerian government is doing its best to mitigate its impact on our nation.”

He, therefore, urged the government to direct the private depots to revert to the old ex-depot price for PMS or deregulate the downstream sector to allow market forces to determine the price.

Mr Akinrinade also advised the government to expedite action on the rehabilitation of the nation’s refineries to increase the domestic refining capacity.

He further called for the resumption of pumping products through the PPMC Ejigbo depot, which would enable IPMAN members to get supplies at a cheaper cost.

Meanwhile, a News Agency of Nigeria (NAN) correspondent who monitored the fuel situation in Oshodi, Ejigbo, Ikeja, Egbeda and Ikotun areas observed that the majority of the filling stations were not selling petrol.

Long queues were seen at the few stations selling with both private and commercial motorists complaining about the situation.

A motorist, Godwin Eke, told NAN that the return of fuel queues was not good for the economy.

“We are spending hours here queuing to buy fuel when we could have been doing something more productive with our time.

“I have not been to my shop since morning because I want to fill my tank, which will last me for the week,” he said.

A commercial bus driver, Aliyu Dawodu, said the scarcity was not good for business, especially as the drivers could not increase their fares.

“There is sufficient fuel at the depots and jetties. As of today (Monday), we have a total of 234,920,127 litres of PMS in various depots in Lagos.