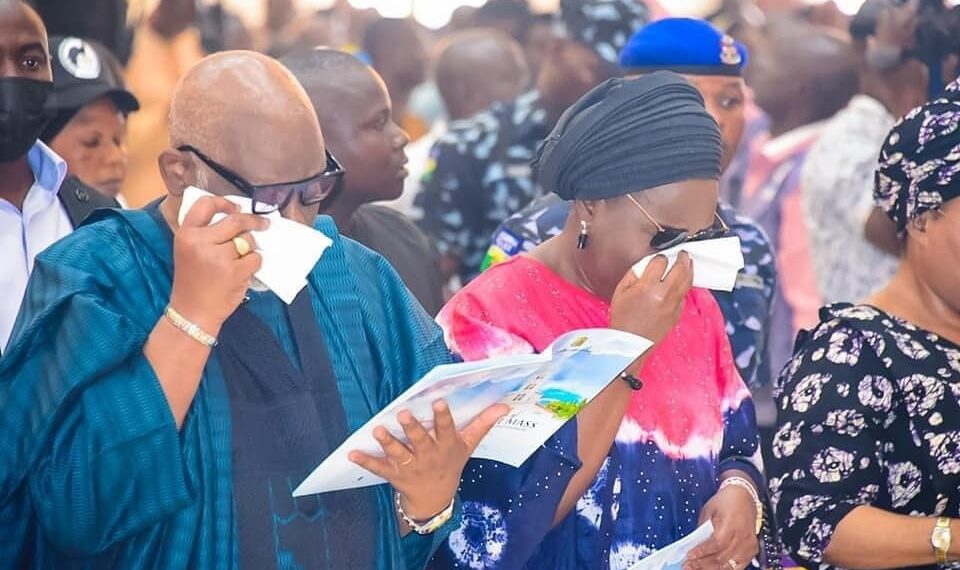 Governor Akeredolu and his wife, Betty, during the funeral service for the victims of St. Francis Catholic Church, Owo, on Friday.

The bishop said, “the church is battered but not down.”

The Catholic Diocese of Ondo on Friday held a funeral service for victims of the June 5 attack at St. Francis Catholic Church, Owo, Ondo State.

The attack by gunmen during mass, claimed at least 40 lives of worshippers while over 80 worshippers are still receiving treatment at the Federal Medical Centre and St. Louis Hospital, both in Owo.

The service, held at the Mydas Event and Resort, Owo, was attended by Governor Rotimi Akeredolu, his wife, Betty, immediate past Governor of the state, Dr Segun Mimiko and prominent indigenes of the state. 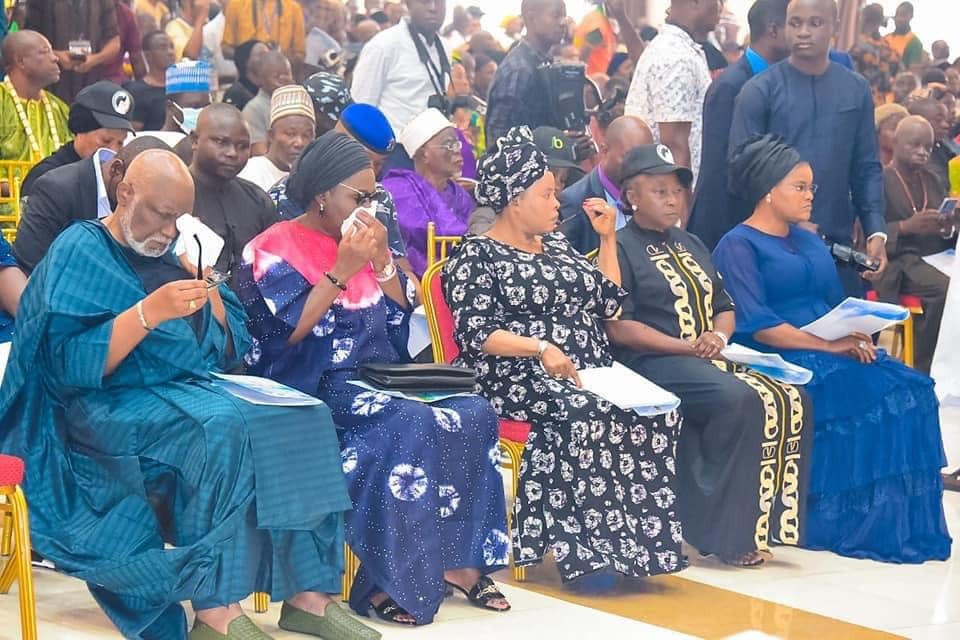 Speaking at the service, Ayo Badejo, the Bishop of Oyo Catholic Diocese, condemned the attack and killing of the worshippers.

The diocese had shared photos of those killed in the attack.

Mr Badejo, while appreciating those who had brought succour to the victims of the attack, described the incident as “sheer brutality and crudeness without any justification.”

While saying that the attack was a total desecration of the body of Christ and humanity, the cleric recounted that the lives of children between the age of two and three were lost in the incident.

According to him, “the church is battered but not down.”

He explained that none of the injured did anything wrong before their sudden death, saying “though they are dead, we have solace that they are in the hands of Jesus Christ.”

He appealed to the Christian faithful “to refuse to be crushed”, noting that “every Christian who died in Christ Jesus has hope in the resurrection.”

He called on the Federal Government and other stakeholders to address, in earnest, “the prevalent brutality and senseless killings across the country.”

He enjoined the country’s leaders to shun discrimination and listen to the cries of the people, noting that the Owo attack might not be the last.

Mr Badejo said if the situation is allowed to continue, people might resort to self-defence.

The bishop also appealed to bandits to have a change of heart, repent and embrace good life to build a country of peace and prosperity.

Speaking during the service, Mr Akeredolu reiterated his administration’s commitment to the safety of lives and property of residents.

The governor, while condemning the attack, called for the immediate rejig of the country’s security architecture.

He said some victims would be buried today, Friday, while some would be returned to the morgue.