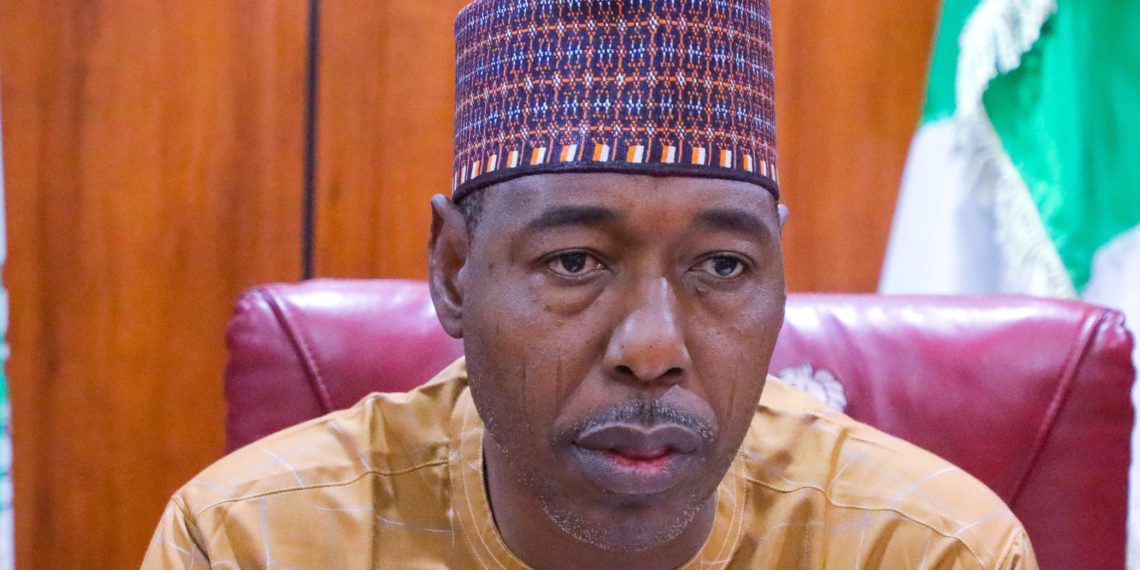 Borno 2023: You are a nobody – Zulum replies PDP governorship candidate

Reacting to the development, Isa Gusau, the spokesman of the governor, said neither he nor his principal would honour the opposition’s candidate is a nobody.

The governor of Borno State, Babaganda Zulum, has asked his supporters to ignore the critical comment about his administration made by the governorship candidate of the opposition Peoples Democratic Party (PDP), Mohammed Ali Jajeri, saying he is a nobody.

In a report published by PREMIUM TIMES on Thursday, Mr Jajeri accused Mr Zulum of running a nepotic government where contracts are awarded to only cronies and family members.

Reacting to the development, Isa Gusau, the spokesperson of the governor, said neither he nor his principal would honour the opposition’s candidate. Mr Gusau described Mr Jajeri as an “unknown governorship candidate.”

Mr Gusau said the governor’s supporters should “resist the temptation of responding to any of the spurious allegations coming from an “unknown governorship candidate (UGC) of the PDP in Borno State”.

“Let me as always, start by once again conveying Governor Babagana Umara Zulum’s profound gratitude to every one of you using social media platforms to consistently promote the developmental activities of the state government. You share in Professor Zulum’s undivided efforts to speed up Borno’s ongoing recovery from the catastrophic impact of over 12 years of insurgency.

“As you may have observed, in recent days, an unknown governorship candidate of the PDP in Borno State has been granting all sorts of political interviews, releasing a series of political articles targeting Governor Zulum ahead of the 2023 governorship election.

“On the surface, it would seem that the unknown governorship candidate wants to square up but from our experiences with such personalities, the man simply wants us to respond so that he will eventually become popular.

“Fact is that he is not quite known even within the PDP stakeholders in Borno State,” Mr Gusau said.

Mr Gusau said he has been involved in politics in the state for more than 18 years but has never heard of Mr Jajeri. He said even members of the PDP did not know their governorship candidate.

“From my inquiry, many stakeholders of the PDP in Borno State, still do not know the man (Jajeri).

“He is an unknown governorship candidate. A UGC.

“Apparently, the man has realized this and is doing everything possible to attract our media reactions, hoping to gain from Zulum’s God-given publicity that is both nationwide and global.

“The unknown governorship candidate (UGC) wants us to respond to his spurious allegations to make him popular.

He then asked the supporters of the governor to be focused and continue highlighting the achievement of his principal rather than responding to Mr Jajeri.

“Focus your energy and time towards continued highlighting of Zulum’s developmental activities that are touching lives.”

Mr Gusau said even if they feel compelled to respond, he instructed them to “simply showcase videos and photos of relevant schools with evidence of locations.”

Wike, Soludo in the frame as Atiku expands search for running mate