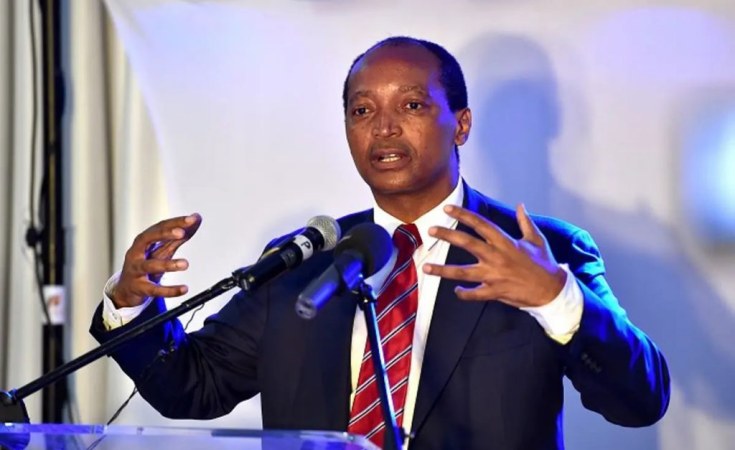 “A World Cup without Nigeria is not the same because the Super Eagles have been the hope of all in Africa.”

The President of the Confederation of African Football (CAF), Patrice Motsepe, has spoken on Amaju Pinnick’s decision not to seek a third term as the president of the Nigeria Football Federation (NFF).

Mr Pinnick announced in April that he would not run for a third term even though he was eligible for it.

His tenure ends in September 2022.

“I’m eligible to run according to the statutes,” he had said in an interview with the Arise News TV.

“Do I want to run? It’s a no-no. My family is very key to me. They said it’s taking a toll on me and the family.

“They believe that I’ve done my best, and it’s time to move on. It’s a regrettable decision, but it’s the best,” he added.

The CAF president, Mr Motsepe, a South African billionaire, was in Uyo, Akwa Ibom State, on Friday, for the CAF Confederation Cup finals between Orlando Pirates of South Africa and RS Berkane of Morocco.

He spoke with a PREMIUM TIMES reporter about Mr Pinnick’s decision.

Mr Motsepe said Mr Pinnick’s decision would guide him, as well as the decision of the football “constituency” in Nigeria.

He, however, said he would not let Mr Pinnick go away.

“What I can say is that he has made such incredible contributions to football in Nigeria and in Africa.

“I respect whatever decision he takes, I am going to continue using him for African football, for Nigerian football,” Mr Motsepe said.

When asked if had made any attempt to prevail on Mr Pinnick to rescind his decision, Mr Motsepe responded: “Well, it’s still too early now. I have got to allow discussions to take place. I think we’ll see how things go within the next few weeks.”

His views on Super Eagles

The CAF president spoke glowingly about the Super Eagles and Nigerian football.

“When the Super Eagles play, yes they play for the people of Nigeria, they represent the pride of our people in Nigeria, but it’s the pride and dignity of everybody in Africa,” Mr Motsepe said.

He said he is confident that Nigerian football “will occupy its position among the best in the world”.

“So we’ll all support the talents, the proud history, the quality of footballers this great nation has produced.

“Of course, as the president of CAF, I support all the nations, but a World Cup without Nigeria is not the same because the Super Eagles have been the hope of all in Africa,” he said.

Nigeria failed in March to qualify for the 2022 World Cup, to be hosted in Qatar, after losing on away goal to Ghana.

The country’s failure to qualify for the World Cup brought tremendous pressure on Mr Pinnick, with some Nigerians calling for his resignation.

“It has been a very turbulent ride for Nigerian football,” Mr Pinnick stated in his interview with the Arise News TV.

The CAF president, Mr Motsepe, said the Africans look forward to having the best from Ghana, Senegal, Tunisia, Morocco, and Cameroon, which will represent the continent in the tournament.

Mr Motsepe, earlier on Friday, led other CAF officials on a visit to Governor Udom Emmanuel of Akwa Ibom State, where he spoke of Nigeria’s “huge sacrifices” – politically and economically – to South Africa and other African countries.

He said the messages at the airport should rather say to him and other Africans, “welcome home” because Nigeria is home for many Africans.

The governor praised Mr Pinnick for the “high standard” he has brought to the football administration in Nigeria and told him he was “too young” to quit.

2023: Only elected delegates will vote at our primaries, convention – PDP