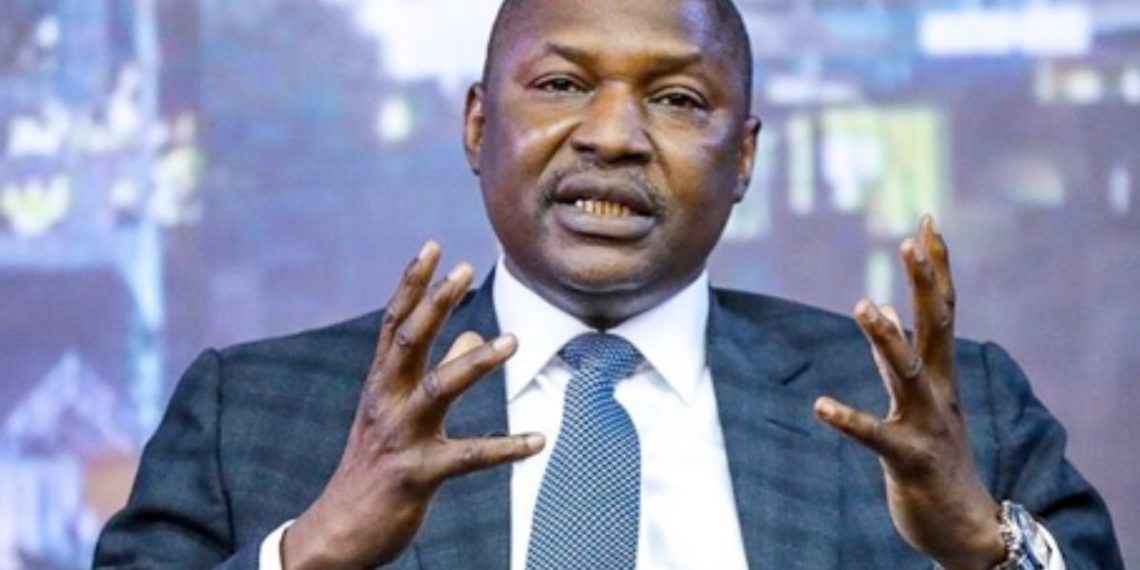 The Attorney-General of the Federation (AGF) and Minister of Justice, Abubakar Malami. [PHOTO: Channels TV]

Mr Malami signed the Regulations in 2019 empowering the federal government to determine procedures that anti-corruption agencies must adopt to manage recovered assets.

The Federal High Court in Lagos has nullified the Asset Tracing, Recovery and Management Regulations for being “an invalid statutory instrument.”

The court also nullified all sales and disposals of assets made by Abubakar Malami, the Attorney-General of the Federation (AGF), under the Asset Tracing, Recovery and Management Regulations, 2019.

Mr Malami signed the Regulations in 2019 empowering the federal government to determine procedures that anti-corruption agencies must adopt to manage recovered assets.

But the judge, Ambrose Lewis-Allagoa, said the Regulations were beyond the AGF’s powers.

The judge made the order on Monday in a suit filed by the HEDA Resource Centre against the AGF.

On November 9, 2020, Mr Malami, who is also the minister of justice, inaugurated the Inter-Ministerial Committee on the disposal of assets forfeited to the Federal Government.

According to the minister, the move was in accordance with the president’s directive in October 2018 following recommendations of the Presidential Audit Committee on Recovery and Management of Stolen Assets and a need for efficient management of the assets.

But HEDA, through its counsel, Omotayo Olatubosun, challenged the AGF’s power to set up the committee.

It argued that the Regulations conflicted with the Economic and Financial Crimes Commission (EFCC) Act, Trafficking in Persons (Prohibition) Enforcement and Administrative Act, 2015, National Drug Law Enforcement Agency (NDLEA) Act, 2004, and Independent Corrupt Practices Commission Act (ICPC), 2000, among others, on the matter of disposal of final-forfeited assets.

The plaintiff sought nine reliefs, including the nullification of all disposals of assets by the AGF’s Committee.

In its judgment, the court dismissed the AGF’s preliminary objection argued by its counsel, Tolu Mokunolu, and granted all of HEDA’s reliefs as prayed on the motion paper.

“I am entirely in agreement with the submission of counsels to the plaintiff that the Asset Tracing, Recovery, and Management Regulations, 2019 are contrary to the statutory provisions of the Economic and Financial Crimes Commission EFCC Act, Trafficking in Persons Cohabitation Enforcement and Administration Act, NDLEA Act, and Immigration Act,” said the judge.

“A careful perusal of the above statutory provisions will show the provisions for the Attorney-General of the Federation to make regulations for the agencies for disposal of assets under the various enactments listed above.

“The above statutory enactments are therefore the enabling source of the Attorney-General of the Federation to the regulations.

“Consequently, the administrative powers to be exercised by the Honourable Attorney-General of the Federation must flow from the enabling statutes.”

He noted that the powers referred to in the commencement clause of the Regulations are to be exercised in accordance with the Acts, not to usurp the mandatory powers vested in the law enforcement and anti-corruption agencies.

“I am, therefore, in agreement with counsel for the plaintiff that the executive orders or any other forms of definition can be issued pursuant to session 315 of the Constitution; however, they are limited to enactments predating the 1999 Constitution.

“In all and for the reasons hereinbefore given in this judgment, the questions put for determination in the originating summons are answered in favour of the plaintiff, and all the reliefs sought are granted as prayed. This is the judgment of the court read in the open court”

The plaintiff’s reliefs granted by the judge include a declaration that by the ICPC Act, the Asset Tracing, Recovery, and Management Regulations, 2019 “is an invalid statutory instrument the former having conferred no power arrogated by the Defendant to himself in the latter Regulations;

“An Order nullifying the Asset Tracing, Recovery and Management Regulations, 2019 as an invalid statutory instrument same being in excess of the provisions of the Independent Corrupt Practices Commission Act, 2000;

“An Order nullifying all sales and disposals of assets made by the Defendant pursuant to the said Asset Tracing, Recovery, and Management Regulations, 2019 same being ultra vires the office and powers of the Defendant.”