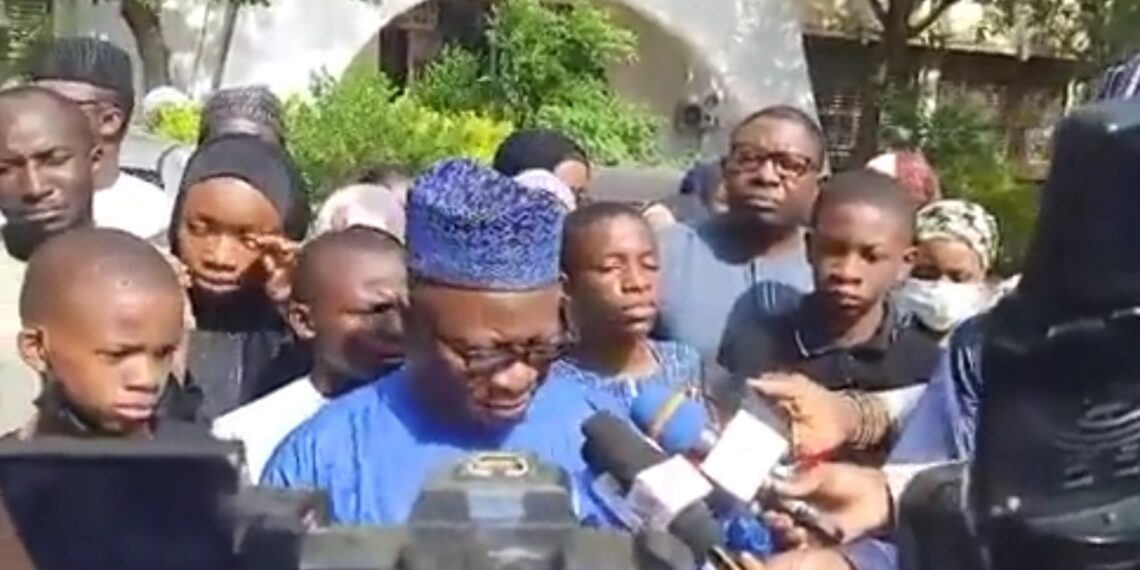 Abdulfatai Jimoh, reading a statement on behalf of the relatives of the passengers

Relatives of abducted passengers of the AK9 Kaduna bound train have asked the Nigerian government not to resume train service as a mark of respect for the abductees.

This is even as some of the relatives accused the minister of transportation, Rotimi Amaechi, of not being serious with efforts to rescue their relatives or secure the release of the hostages from captivity.

They accused Mr Amaechi of prioritising his political campaign.

PREMIUM TIMES reported how bandits planted explosives on the rail track and immobilised the train coming from Abuja to Kaduna around Katari and Rijana.

Two video footage and photos of the abducted passengers were released by the bandits on separate occasions and insisted that the Federal Government should listen to their demands for the release of the victims.

One of the pregnant women in captivity gave birth to a baby girl.

While reading a statement on behalf of the relatives of the passengers, Abdulfatai Jimoh said the resumption of the train service should be stopped until their relatives are rescued.

According to Mr Jimoh, the government should also provide adequate security to ensure that those intending to use that train in the future are safe.

Mr Jimoh said the Nigerian Railway Corporation has kept the family members in the dark about efforts being made to secure the release of the hostages.

“NRC has neither contacted the relatives of kidnapped victims nor established any situation room as directed by the President.”

He also called on President Buhari to punish the officials of the railway corporation for their incompetence.

Mr Jimoh, who was sobbing while reading the statement, said they have found it difficult to convince other family members especially children of the whereabouts of their parents.

“Today marks the 42nd day our loved ones have been held hostage. It has been 42 long days of living in fear, virtually no sleep, no bath, wearing the same clothes, under the scorching sun and rain, and exposed to extreme environmental hazards. The emotional, psychological, mental, and physical torture arising from these conditions are only imaginable.

“Among the abducted passengers are children, some as young as 3 years old, pregnant women, women including an 85-year-old great grandmother, and others. Some of these victims have health challenges requiring daily medications, which they have had no access to in the last 42 harrowing days,” he said.

Mr Jimoh then accused Mr Amaechi of not being sincere about rescuing the hostages. He said the minister is rather focused on pursuing his political campaign instead of ensuring that the captives are rescued.

“Just a few days after 28th March, Mr Amaechi was seen running around the Stadium in Port Harcourt where he declared his intention to become the next President of Nigeria. We had expected Mr Amaechi to be seen running around on how to get his abducted passengers rescued, and this is highly disappointing,” he said.