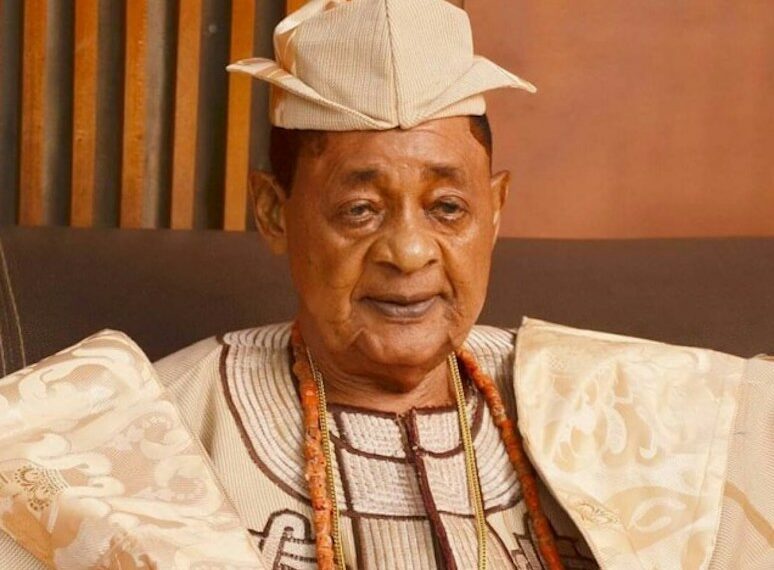 He was the longest-serving Alaafin, having spent 51 years on the throne.

The governors of the states in South-west Nigeria have paid tributes to the Alaafin of Oyo, Lamidi Adeyemi III, who died on April 22.

The late monarch was 83.

He was the longest-serving Alaafin, having spent 51 years on the throne.

The governor, according to a statement by his Chief Press Secretary, Taiwo Adisa, described the monarch’s death as a personal loss to him.

He also said the Alaafin’s words of advice and guidance were always golden and helpful to him.

“Oba Adeyemi was our last man standing in the rank of most eminent royal fathers with long years of leadership.”

“He became a golden king, an institution and an authority rolled into one by virtue of his immense experience, wisdom, and understanding of Yoruba history, royalty, and politics.

“Oba Adeyemi not only elevated the Alaafin throne with his knowledge and wisdom, but he also became a worthy exemplar for royal leadership in Africa and brought glory to Oyo State and Nigeria.

“Kabiyesi never spared anything in his strive to make Oyo State greater and to bring about the Nigeria of everyone’s collective dream.

“It is my prayer that God accepts Kabiyesi’s soul into Aljanah Firdaus and upholds everyone and everything he left behind.

Governor Babajide Sanwo-Olu of Lagos State described the Alaafin’s demise as a great loss to Nigeria.

In a condolence message by Governor Babajide Sanwo-Olu, he commiserated with the Governor Seyi Makinde of Oyo State and the entire Yoruba race both at home and in the diaspora

“The late monarch’s service to the people of the ancient town, Oyo State and Nigeria, especially in the area of promotion of Yoruba culture and tradition, will remain his enduring legacy,” Mr Sanwo-Olu said in the message by his Chief Press Secretary, Gboyega Akosile.

Mr Sanwo-Olu urged the family, friends, and associates, as well as the entire people of Oyo Kingdom, to immortalise him and ensured the late Alaafin of Oyo’s legacies were sustained.

”The death of Oba Adeyemi is a great loss not only to the people of Oyo State but the entire Yoruba sons and daughters at home and in the diaspora.

“This is because of the unique position the Alaafin of Oyo holds as a descendant of Oduduwa. He will be greatly missed.”

Governor Kayode Fayemi of Ekiti described the late monarch as a bridge-builder, patriot, and courageous leader who contributed to Nigeria’s unity during his lifetime.

Mr Fayemi made the assertions in a statement signed by his Chief Press Secretary, Yinka Oyebode, on Saturday in Ado-Ekiti.

He said the departure of the revered traditional ruler had created a big vacuum in the traditional institution in Oyo State, in particular, and Yorubaland in general.

According to him, the late monarch was an authority in history and blessed with a sharp memory that added value and class to his royal duties and day-to-day interaction with people from different walks of life.

Mr Fayemi, also the Chairman, Nigeria Governor’s Forum, described the deceased as a distinguished first-class Oba, who brought dignity, respect, and glamour to the traditional institution and made it relevant in the quest for a better society.

He said the late royal father operated an open door policy and always made his wise counsel available to political leaders, irrespective of their party affiliations.

Mr Fayemi, while describing the late traditional ruler as a man of many parts, said he never disappointed in performing his royal duties and other roles he was privileged to have played, which spanned sectors like administration, politics, education, religion, sports, among others.

He said the late monarch earned much respect and accolade for his ability to speak the truth to those in power, without playing to the gallery.

Osun – End of an era

Governor Adegboyega Oyetola of Osun said the Alaafin’s death signified the end of an era.

The governor in a statement by his Chief Press Secretary, Ismail Omipidan, on Saturday in Osogbo, said the death of the first class traditional ruler was a personal loss to him.

According to him, the late monarch was a good friend of Osun, who was always ready to identify with our government and celebrate our humble accomplishments and achievements.

Mr Oyetola said the late traditional ruler was a firm believer in progressive ideals, and that he remained true to his convictions over the years until his demise.

He further described “Iku Baba Yeye”, as he was fondly called, as a humble and an amiable traditional ruler, despite his revered position.

“Oba Adeyemi was a visionary and an exemplary leader whose 52-year reign brought tremendous attention, peace, stability, and unprecedented development to the ancient Oyo town and its people.

“Baba was a strong believer in progressive ideals, and he remained true to his convictions over the years until he breathed his last.

“He will be long remembered for his impacts, achievements, outstanding legacies, and remarkable service as a custodian of the rich Yoruba cultural heritage and traditions.”

Ondo – ‘Fall of a great iroko’

Governor Rotimi Akeredolu of Ondo State described the Alaafin’s death as the fall of a great iroko.

Mr Akeredolu, who is the chairman of the Southwest Governors’ Forum, said the Oba’s death was a rude shock.

This is contained in a statement signed by his Chief Press Secretary, Richard Olatunde, on Saturday in Akure.

Mr Akeredolu described the transition of the highly revered monarch to the world beyond as an enormous blow to the Oyo Kingdom, Yoruba race, and the country at large.

“We have lost a quintessential traditional ruler and custodian of the Yoruba culture. His contributions to the development and advancement of the country and Yoruba land, in particular, are unquantifiable.

“He was a great pillar. A great giant who did not only represent our cultural values but also preserved and promoted the Yoruba culture. He was a repository of knowledge.

“With over five decades on the throne of his fathers, Oba Lamidi III was the longest-reigning Alaafin whose reign has been the most remarkable for the entire Oyo Kingdom. He was a symbol of Yoruba Unity.

“His commitment toward ensuring the unity of the Yoruba can not be forgotten in a hurry. He lived a life invariably imbued with candour and resplendence. He was royal to the end.” the governor said.

He added that the efforts of the late Alaafin toward the unity and progress of the Yoruba would not be forgotten in a hurry.

Governor Dapo Abiodun in a statement on Saturday said the monarch’s demise has created a huge vacuum in traditional and historical societies.

“It is unfortunate that Kabiyesi had to take his leave of us at this period when we need his wisdom the most, as we approach the 2023 general elections, a critical period in our political landmarks,” the governor said.

“His death is a great loss because Nigeria will miss the services of a great reservoir of knowledge and historical narrations.”