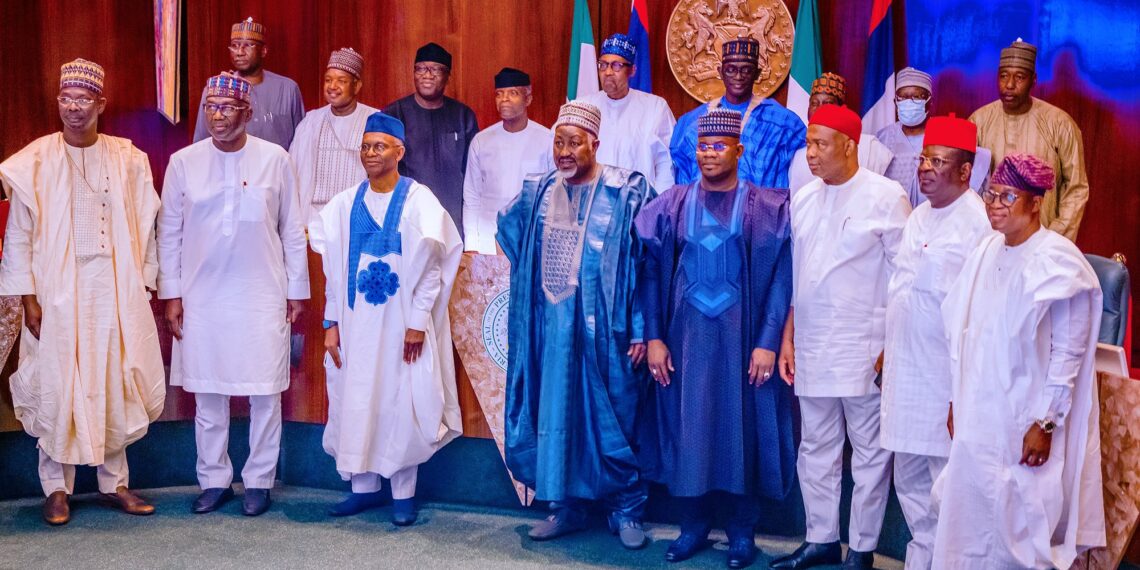 Pictures from President @MBuhari meeting with members of the Progressive Governors’ Forum led by the Chairman of the Forum Gov. Atiku Bagudu of Kebbi State. [PHOTO CREDIT: Bashir Ahmad]

The governors also briefed Mr Buhari on the issue of distribution of political party offices to the respective zones.

President Muhammadu Buhari on Wednesday met behind closed doors with governors of the All Progressives Congress (APC) over the forthcoming National Convention of the party, slated for March 26.

Speaking with State House correspondents at the end of the meeting, the Chairman of the Progressive Governors’ Forum, who is also the Governor of Kebbi State, Atiku Bagudu, said the governors had resolved to support whoever the president supports at the convention.

The News Agency of Nigeria (NAN) reports that the governors were led to the meeting by the Chairman of the Interim Committee of the party and Governor of Yobe State, Mala Buni.

Mr Bagudu said the governors agreed to support any process that would lead to a consensus.

Mr Buhari had last month said he was in favour of the consensus mode for selecting candidates for the party’s national positions.

He had urged the governors to explore the option of consensus.

Mr Bagudu revealed that the president was updated on what they (governors) had been doing in support of the convention.

“Today, members of the Progressive Governors Forum were hosted by Mr President at a meeting to discuss what the governors have been doing in preparation for the March 26, National Convention.

“That letter led to a series of actions, including meetings between the Secretary to the Government of the Federation, Chairman of the National Caretaker Committee, Acting Chairman, Gov. Abubakar Bello of Niger State, as he was then, and myself.

“We all restated our commitment to working together to ensure that the convention takes place on March 26, 2022 and then we agreed to support all the decisions that were taken by the Caretaker Committee, both acting as a working committee and acting with the donated powers given to it by the National Executive Committee.

“Indeed, the Chairman of the Caretaker, upon his return, also appreciated what the Caretaker Committee did and the decisions that were taken in his absence.

“Today we all briefed Mr President on that, and our support for Mr President’s endorsement of the candidate for the National Chairman of the party.”

No fewer than seven aspirants have picked the expression of interest and nomination forms to contest for the office of the national chairman of the ruling party.

They all hail from the North-central geo-political zone to which the party zoned the position.

One aspirant, Abdul’aziz Yari, a former governor of Zamfara in the North-west, who defied the zoning arrangement and picked the form last week, also made the list.

Meanwhile, the governor stated that the president was also briefed on the issue of distribution of political party offices to the respective zones.

He added that the various geo-political zones took turns to brief the president on what they had been doing to generate consensus in their respective zones.

“Most of the zones have been allocated National Working Committee positions that are fewer than the number of states, but however, there are zonal executive committees from which the zones are working to produce a consensus list,’’ he said.

“Naturally, there will be hiccups one day, but we have overcome them and we are a human organisation, which is bound sometimes to generate emotions and anxiety, but we are united and unanimous and by God’s grace, we’ll have a very successful and peaceful National Convention.’’