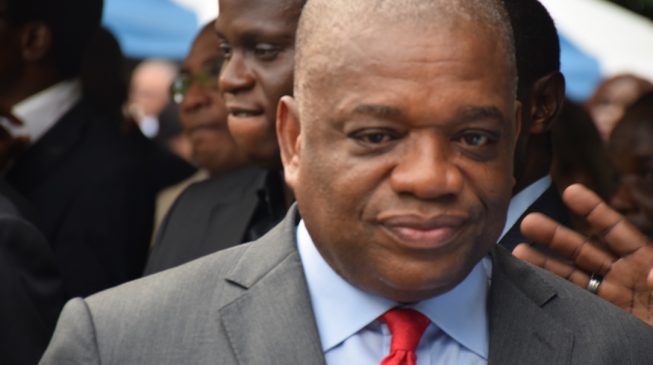 EFCC says it has five grounds for seeking the transfer of the case involving Orji Kalu, a fomer governor of Abia State, from Abuja to Lagos.

The Economic and Financial Crimes Commission (EFCC), on Thursday, asked the Federal High Court in Abuja to transfer the case involving N7.1 billion fraud allegedly perpetrated during the tenure of Orji Kalu as governor of Abia State, to its Lagos division.

Mr Kalu, a serving senator representing Abia North, was tried alongside his company, Slok Nigeria Limited, and Udeh Udeogu, a Director of Finance and Accounts at the Abia State Government House during Mr Kalu’s tenure as governor.

In December 2019, they were convicted for diverting N7.1 billion from the Abia State’s coffers.

Mr Kalu was already serving a 12-year jail term for the offences when the Supreme Court, in May 2020, nullified the proceedings leading to his and his co-defendants’ conviction.

His co-defendant, Udeh Udeogu, was also jailed 10 years at the end of the trial and Slok, Mr Kalu’s firm, was ordered to be wound up.

Although, the Supreme Court ordered the defendants to be tried afresh, Inyang Ekwo, the judge that the case was re-assigned to at the Federal High Court in Abuja, controversially barred EFCC from prosecuting Mr Kalu afresh in a ruling delivered in September 2021.

Mr Ekwo, who also exempted Mr Kalu’s firm, Slok Nigeria Limited, from the fresh trial, had ordered that EFCC should only proceed against Mr Udeogu.

At the resumed hearing in the case on Thursday, the EFCC, through its lawyer, Oluwaleke Atolagbe, applied for the transfer of the trial to the Lagos division of the court.

The judge, Mr Ekwo, said he would not take the application in view of the approaching Easter holidays.

The judge adjourned until May 17.

At the proceedings, Awa Kalu, a Senior Advocate of Nigeria (SAN), represented Mr Kalu while Solo Akuma (SAN) stood in for Mr Udeogu, and Goddy Uche (SAN), was counsel for Slok Nigeria Limited.

The EFCC, in its application, raised five grounds for seeking the transfer of the case to the Lagos division of the court.

One of the grounds is that the Abuja division of the court lacks the requisite territorial jurisdiction to entertain and try the defendants in respect of the charge.

The anti-graft agency recalled that the charges were originally filed at the Federal High Court Abuja in 2007.

The defendants were also said to have filed an application to challenge the competence of the charges.

Mr Atolagbe said following the decision of the Supreme Court that many of the ingredients of the offences occurred in Lagos and that most of the proposed prosecution witnesses were residing in Lagos, the EFCC applied to the Chief Judge of the Federal High Court to transfer the matter to Lagos.

Satisfied that many of the ingredients of the offences occurred in Lagos, Mr Atolagbe said, the Chief Judge transferred the case to Lagos division of the court where the defendants were prosecuted and judgment delivered in the matter.

He, therefore, asked Mr Ekwo to issue an order transferring the trial to Lagos in compliance with the Supreme Court order for a retrial.

Makinde presents car gift to Olubadan-designate ahead of coronation