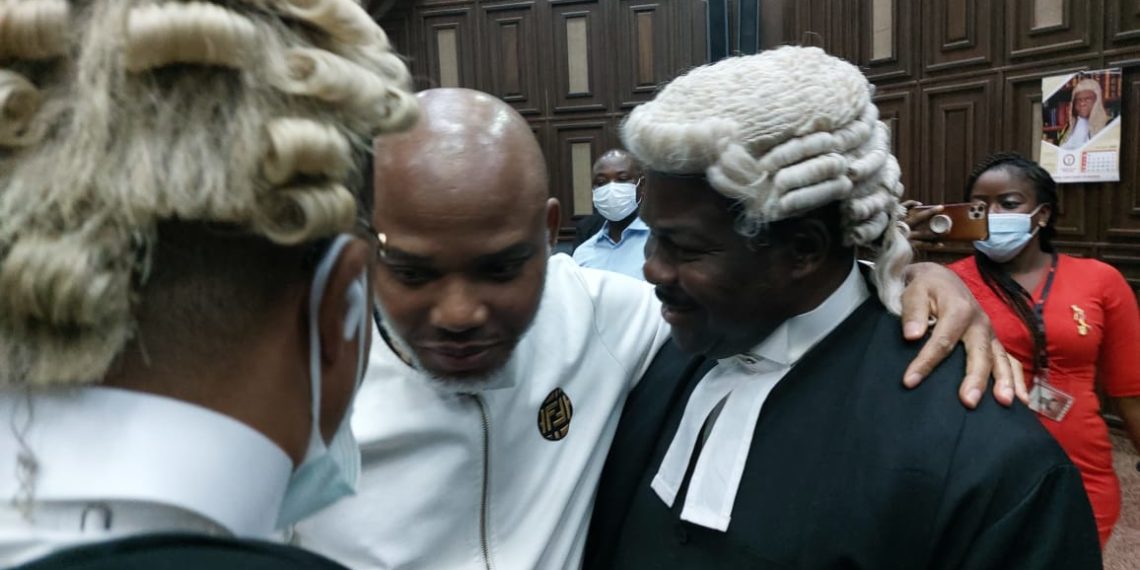 Court to rule if terrorism charges against Nnamdi Kanu are valid

Mr Kanu’s lawyer contended that the charges were defective for not giving the locations where the alleged offences were committed.

The Federal High Court in Abuja, on Wednesday, slated April 8 to determine the validity or otherwise of the amended charges of terrorism and treasonable felony the federal government slammed on Nnamdi Kanu over his alleged separatist activities.

Mr Kanu who leads the Indigenous People of Biafra (IPOB), a proscribed successionist group in Nigeria, was rearrested and forcibly returned to the country last June, after he fled his Afara-Ukwu country home in Abia State following a military invasion of the community in 2017.

The trial judge, Binta Nyako, fixed the date for ruling after hearing the defence and the prosecution over Mr Kanu’s application on Wednesday.

“The entire charges do not disclose any prima facie case against the defendant (Mr Kanu),” the defence lawyer told the court.

Mr Ozekhome, a Senior Advocate of Nigeria (SAN), argued that “the defendant was unlawfully and brutally extraordinarily renditioned from Kenya,” an action he said breached the African Charter on Peoples Rights.

Challenging the court’s jurisdiction to entertain the suit, Mr Kanu’s lawyer contended that the charges conferred “a global jurisdiction on the court” by not giving the locations where the alleged the offences were committed.

“A charge must disclose the specific location where an alleged crime was committed,” Mr Ozekhome said.

He further told the court the “prosecution is still using the proof evidence it tendered at the beginning of the trial in 2015” despite the fact that most of the earlier charges had been dismissed.

It will be recalled that the judge had earlier struck out six of the 11 original counts on March 1, 2017.

Also, Mr Ozekhome argued that the federal government’s charge criminalising Mr Kanu’s leadership of IPOB, was wrong as there is not basis for such owing to the fact that “IPOB proscription is a subject of an appeal at the Court of Appeal.”

“I urge my Lord to take a look at this case calmly, and you will discover that they are as hollow as a pipe,” Mr Ozekhome said, urging Mrs Nyako to discharge and acquit Mr Kanu of the alleged crimes.

Mr Labaran said the federal court was clothed with the statutory jurisdiction to hear and determine the suit.

He referenced Section 32 of the Terrorism Prevention Amendment Act, 2013, saying, “The Federal High Court sitting in Nigeria has the exclusive jurisdiction to try this matter.”

“We urge the court to refuse this application for the trial of the defendant to commence in earnest,” the prosecuting lawyer said.

The IPOB leader was accused of various offences, including treasonable felony and terrorism, offences he allegedly committed in the course of his secessionist campaigns.

Mr Kanu who was first arrested in 2015 over his separatist activities has been re-arraigned before three different judges of the court in Abuja after the first set of charges were filed against him and his former co-defendants on December 18, 2015.

The current judge, Mrs Nyako, took over the case in 2016 after two judges – Ahmed Mohammed, and John Tsoho had adjudicated on it.

The previous judges withdrew from the case at different times following Mr Kanu’s allegation of bias against them.

The charges were later amended after Mrs Nyako, who took over the case after Mr Tsoho, struck out six of the 11 counts on March 1, 2017.

Mrs Nyako later granted bail to Mr Kanu in April 2017. But months later, the defendant fled the country after soldiers invaded his home in Abia State in September 2017.

On March 28, 2018, following Mr Kanu’s continued absence from court, the judge separated his trial from that of his four other co-defendants.

Exactly a year after, on March 28, 2019, the judge ordered Mr Kanu’s arrest and directed that his trial on charges of treasonable felony would proceed in his absence.

The case against Mr Kanu comprising seven charges did not make any progress until he was arrested abroad and returned to the country by the federal government in June 2021.

The federal government filed amended charges raising the number of counts from seven to 15 to incorporate terrorism offences he allegedly committed through broadcasts outside the shores of Nigeria.