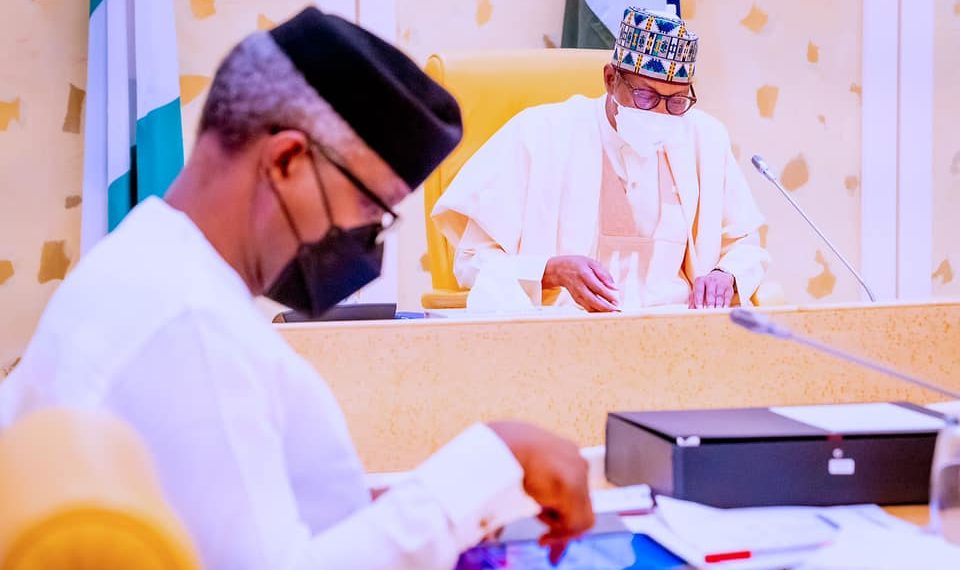 FEC approves N38.4bn for completion of road projects in Anambra, Benue, Bayelsa, others

The Federal Executive Council (FEC) has approved N38.4 billion for the completion of some inherited road projects in five states of the federation.

Minister of Works and Housing, Babatunde Fashola, made this known when he briefed State House correspondents at the end of the Council meeting, presided over by President Muhammadu Buhari on Wednesday in Abuja.

According to him, the benefiting states include Benue, Bayelsa, Anambra, Imo and Nasarawa.

He added that all the affected projects were inherited from previous administrations.

“They are not new projects, they are projects that we inherited and we are trying to complete. So essentially they relate to cost revision because of the ages of the contracts and the prices of goods that have changed.

“The first one was the contract for a 13.5km spur of road from Onitsha-Owerri road through Okija-Ihembosi-For Ugbor to Ezinifite in Nnewi South Local Government Area of Anambra.

The minister said the second contract was that of the completion of a 20km road in Bayelsa.

“The second one is the 20 kilometer dualization of Yenagoa road junction to Kolo and Otuoke and Bayelsa Palm in Bayelsa State.

“That contract was awarded in Dec. 2014 on the eve of the tenure of the last administration and it couldn’t even take off because of militancy issues at the time and also very limited budget provisions.

“It is one of the contracts that we have since activated with the Sukuk Bond.

“So, the dualisation is progressing but there is some additional work that needs to be done.

“There are also results of further investigations that support a revision of the contract by N7.947 billion and this was approved by the council,’’ he said.

Mr Fashola said the third contract was for the completion of a road linking Nasarawa and Benue states.

“The complete lane from Otukpo to Nasarawa ought to be facilitated by this 74km road. The contractor has struggled with just about five kilometers of it since 2006, and a small bridge.

“So, we’ve limited the contractor who was originally awarded this road to just 10.8, that’s all he will do.

“So, all of these totaling a revised project sum of about N30 billion, shared amongst the three contractors,” he said.

The minister noted that the completion of the road would also save travel time for its users, especially those travelling from Otukpo in Benue to Abuja.

“What is instructive is that once we finish this last part of the road, although it is being used now, it is not tarred, commuters are using it because it cuts off three hours from the journey from Otukpo to Abuja.

“Motorists don’t have to go through Lafia, if you climb the Oweto Bridge across the River Benue, land in Nassarawa, you’ll be landing around Keffi.

“So, it’s cutting off 103 from that journey from Otukpo to Abuja, which is about three hours. It used to be six hours plus.

“This is strategic also for providing prosperity, lifting people out of poverty because if the saying that time is money is true, everybody who saves three hours has three hours’ extra productivity and also consumes three hours less fuel and travel time and so on.

“So, Council approved this memo and we hope that sometime next year we can complete that linkage.

“But as you know, those of you who went with me, commuters are already using the road in spite of that path not being complete,” he said.

Also addressing the correspondents on the outcome of the meeting, the Minister of Water Resources, Suleiman Adamu, disclosed that the Council approved N10.7 million as augmentation for the completion of Middle Rima Valley Irrigation Project in Sokoto State.

“The Federal Ministry of Water Resources presented a memo to council for the revised total cost of phase II of the construction of middle river valley irrigation project.

“That is the completion of the middle Rima valley irrigation project in Goronyo, Sokoto State.

“This contract was started in 1999 by the military administration then, first phase was completed, comprising 873 hectares.

“The phase II was started in 2007 and that is what we have been struggling to complete. It is also an inherited project.

“The total scope of the phase II is 404,333 hectares out of which about 80 per cent of the work has been done.

“So, this memo is seeking a revised cost of the project, with an augmentation of about N10.7 million so that we’ll be able to finish the project, hopefully before the expiration of this administration in 2023,” he said.

According to Mr Adamu, the project has a potential of generating employment for almost 50, 000 people as well as enhancing food production.

“It’s expected to provide, by the time it’s completely finished, a production of 39,000 tons of rice, 195,000 tons of vegetables per annum and it will generate employment for not less than 47,000 people and their families.

“So, Council graciously approved this memo with an additional completion period of about 24 months.

“Like I said, our target is to try to complete this project by 2023. This is in line with what we’ve been doing since the inception of this administration in my ministry; to complete ongoing, inherited and abandoned projects,” he stated.

The minister said out of the government’s target of completing the 116 inherited projects, 34 had so far been completed.

The News Agency of Nigeria (NAN) reports that the Council meeting was preceded by the swearing-in of three National Commissioners of the Independent National Electoral Commission (INEC).