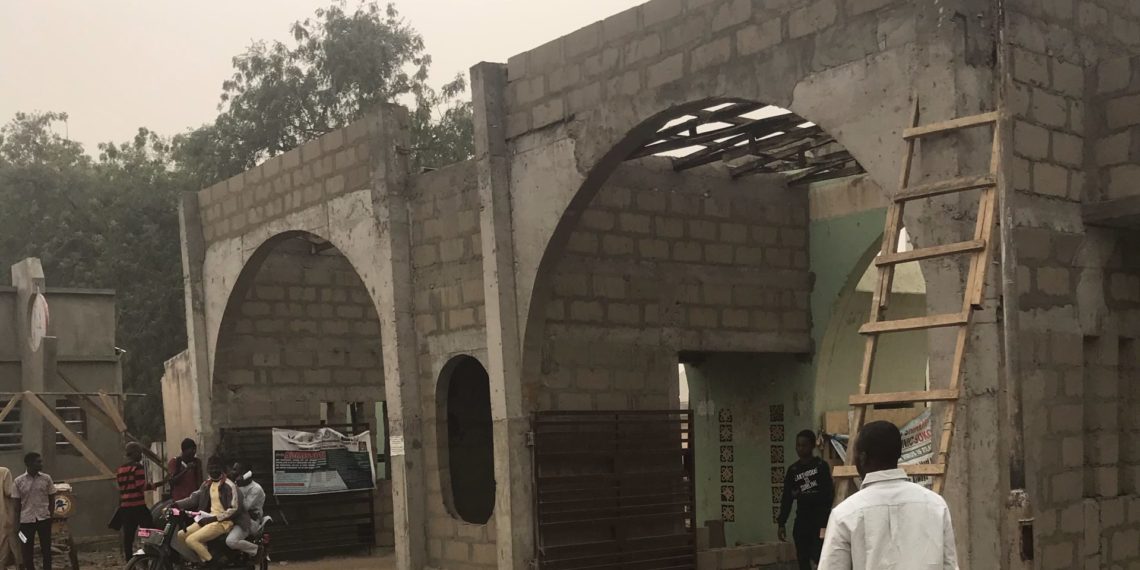 Ongoing beautification at the institutions gate

Officials could not provide details of two projects included in the Sokoto State budget for the polytechnic.

As Abdulrahman Abubakar (not real name), an ND 1 student of Computer Science, commenced another journey from his hostel to get water, he wore a face of tiredness and frustration.

Getting water easily was a luxury for him and other students of Umaru Ali Shinkafi Polytechnic, Sokoto, who lived on campus.

So to get a scoop of the limited water supply, it was survival of the fittest.

Were that to be the only worry of the polytechnic students, maybe that would not be enough to make studying tedious. The school also lacks regular electricity supply, which the students say makes learning difficult.

Mr Abdulrahman said this was a big albatross that has compounded students’ welfare in the school hostels.

“Whenever the light went off, water also went off, so we have no other option than to find other alternatives ourselves. Light often stays for three hours and some other times six hours,” he said.

“If I have any opportunity to discuss with the management, I will tell them to find a solution to our electricity problem at the hostel, because if there is light there will be enough water for us to use.”

Mr Abdulrahman is not alone. Abdulazeez, another student of the school who spoke to this reporter on the condition that his full identity will not be disclosed, shared the same plight. He noted that the erratic power supply has made reading from his gadget difficult.

“The electricity issue affects all the students. Even now, I am going outside the school to charge my phone,” he said.

Amid these shortages, controversy trails two capital projects for the school supervised by the Sokoto State ministry of higher education, two years after their approval by the state government, investigations by this reporter have revealed.

The two projects are “general tree planting programme and face beautification of the environment” for which N50 million was budgeted. The exact amount released for the projects could not be confirmed.

A visit to the site shows that the tree-planting project has either not commenced or does not have the desired impact.

A visit to the institution shows brown patches of dead tree stumps along the polytechnic’s primary school. Checks by UDEME showed no signs of newly planted trees, save for some old ones along the institution’s main road.

Some students who spoke with UDEME believed that the projects are a waste of funds and misplacement of priority. This is largely so because while millions of naira were earmarked for them, subject to releases, there is barely anything to show for their delivery.

Students, all of whom asked that their identity not be disclosed for fear of being victimised by the school management, said what the school needed were projects on classroom renovation, electricity and water, amenities the students needed most.

Kareem Nahimat (not real name), an NDII student of computer science, said she was forced to move off-campus due to lack of adequate water supply in school hostels.

She wondered about the rationale of spending so much money to beautify the school gate when most of the hostels lack water and electricity.

“All that the school cares about is to beautify the school gate and water flowers. They even prefer providing water to flowers than students. There are some guys that always come all the way to Arkilla (outside the school) from the hostel just to fetch water,” she said.

She also lamented that her department’s lecture theatre needed a face-lift because of congestion during lectures.

“Those classes are not comfortable at all, we borrow engineering classes, and anytime they want to use their class, we will be asked to go out,” she said.

“Though there are some empty classes that students are supposed to be using, they remain locked. I don’t know what they want to use them for.”

Although there were no traces of tree planting, UDEME observed that some sort of school beautification was ongoing around the school gate.

It is unclear if it was part of the projects budgeted for by the ministry.

The students union leader, Hassan Muhammed, said that the school management was responsible for the gate beautification.

“Although the school management cannot execute any project in the institution without an approval from the state government, I know the school is responsible for the project at the school main gate and not the government,” he said.

‘We are trying our best’ – Dean reacts

Commenting on the situation, the dean of student affairs, Aliyu Muazu, said the institution’s electricity supply shortage was statewide and was beyond the control of the school.

He added that the school does not have a dedicated line from the national distribution centre. He said the continuous flow of water is related to the availability of electricity.

“This issue of electricity is everywhere, even in my house, I don’t have light,” he said.

Mr Muazu noted that the school management was trying its best to ensure that students get enough water as it releases funds every day to buy fuel in order to pump water at all hostels.

“We always spend N5,000 both in the morning and night to pump water for the students, but the water doesn’t last long. Even this morning I gave the generator guard five thousand naira to buy fuel for the pumping.”

“We are in the era of solar. I gave a suggestion to the school management in our last meeting not to depend on KEDC again and I am sure they will take it up” he said further.

In a bid to get the exact amount officially budgeted and spent on the tree planting and beautification projects, this reporter wrote an FOI to the commissioner of higher education, Sokoto.

The commissioner, in his comments, denied the existence of the project despite being approved in the budget under the supervision of his ministry.

“I am not aware of this project but you can please invite them for a meeting to shed more light on this.”

A similar position was stated by the ministry’s director of finance, Ibrahim Didi.

“The project does not appear in our budget, talk less of the ministry to supervise it, and it is not we you should come to, you go to Umaru Ali Shinkafi polytechnic,” Mr Didi said.

Shown a copy of the state’s 2019 approved budget containing the projects, he promised to get back. Thereafter, calls and messages sent to him were not responded to.

The office of the school’s rector, Aminu Ibrahim, said he was “unavailable” when a letter asking for comments was submitted in April. Subsequent calls and messages placed to Mr Didi’s line were declined.

The deputy rector, Kabiru Yakubu, also declined to speak because he needed the “permission of the ministry.”

(This story was produced as part of the Udeme project, a social accountability and transparency project of the Premium Times Centre for Investigative Journalism, (PTCIJ). The content is the sole responsibility of the author and the publisher).