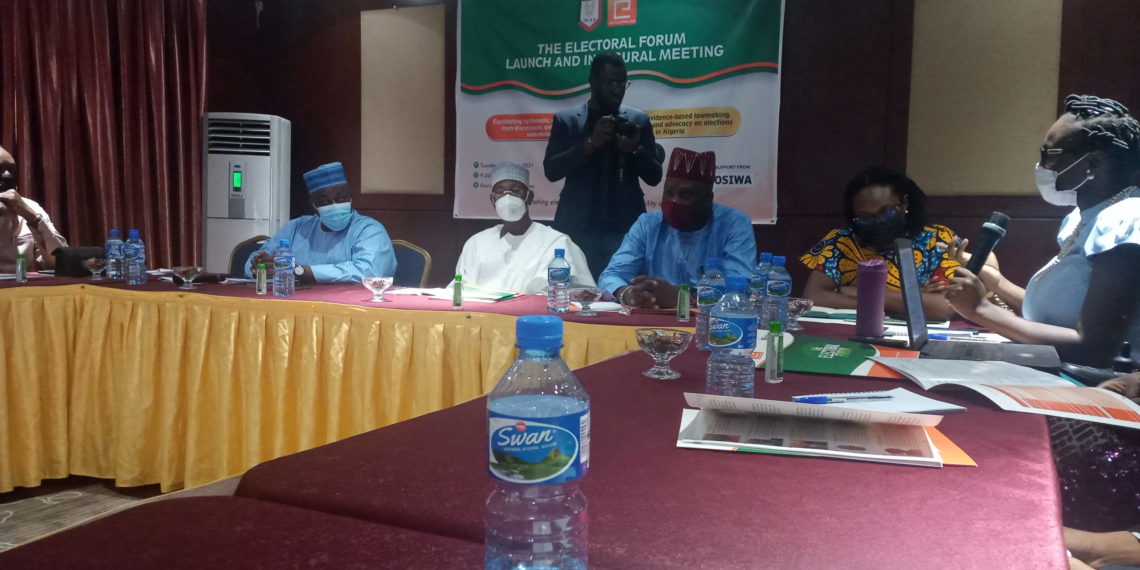 Mr Jega in white attire flanked by Prof Ibrahim and Mr Bwala (both in blue attires) at the event.

Politicians and election experts agreed that Nigeria's democracy may not advance if issues of election culture, money politics and political party manipulations are not properly addressed.

Nigeria’s democracy may continue to suffer setbacks if issues of electioneering culture, money politics and political party manipulations are not adequately resolved, election experts and politicians, have said.

They spoke at the Electoral Forum launch on Tuesday in Abuja.

In recent years, the country has arguably witnessed more democratic regression, which has questioned the social contract between government and the citizens and marred its electoral integrity.

At the launch of the forum established to facilitate systematic electoral reform, promote evidence-based lawmaking and strategies to improve Nigeria’s electoral management body (EMB), the experts and politicians, including the Deputy Senate President, Ovie Omo-Agege; a former INEC chairman, Attahiru Jega; a Senior Fellow of the Center for Democracy and Development (CDD), Jibrin Ibrahim, among others, brought perspectives in the country’s growing electoral problems.

Mr Ibrahim, a professor, who served as a member of the Electoral Reform Committee established by the late President Umaru Yar’Adua, in his keynote speech, accused Nigerian politicians of circumventing plans devised to give Nigerians credible elections.

“Nigerian politicians have very bad behaviour and they are less educated. The political class is the problem with the nation’s electoral experiments. They engage in political factionalism and fratricidal politics,” he said, arguing that no political parties since 1999 had true members other than crowds who sheepishly follow the highest bidder or “National Leader.”

Nigeria’s Senate President, in his address read by his Adviser on Legal and Constitution Matters, Daniel Bwala, said a sustainable electoral process and laws are not possible without refined electioneering culture.

“While there have been many more issues in our electoral history, it seems to me that if we have had adequate and unambiguous clauses, plus adequate advocacy, understanding and the will to comply, we would have had less controversies, fewer post-election court cases and generally, a more credible electoral process.

“This is to say that we need adequate and generally acceptable rules of engagement in the electioneering process,” he said, calling for a refined approach in the selection of party flag bearers, campaign rally and other political actions.

Mr Jega, on his part, said the change Nigerians demand may not come through the big platforms but possibly through third parties.

He encouraged young Nigerians in attendance to join parties with both long and short term realistic vision for a progressive nation and grow with the party.

Mr Jega, who supervised the 2015 elections that ended the 16 years rule of the PDP and ushered in the President Muhammadu Buhari-led government, said he joined politics because he is tired of “sitting and looking like many Nigerians.”

“I thank God for what he has done for me and my generation but what can I tell my children and grandchildren when eventually we allow people to wreck this country without doing nothing but sit and agonise over what they are doing,” he said.

In a recent interview with BBC Hausa, the immediate past INEC chairman had called on Nigerians to dump both the APC and the Peoples Democratic Party (PDP) for a more credible political platform in the 2023 General Elections.

He is currently a member of People’s Redemption Party (PRP), which is one of the 18 recognized parties in the country by INEC.

Other dignitaries who spoke at the launch, a concept of Princess Hamman-Obels’ Electoral Hub, include the INEC chairman, Mahmood Yakubu; the Africa Director of MacArthur Foundation, Kole Shettima; and the Programme Coordinator of Open Society Initiative for West Africa (OSIWA), Catherine Angai.

The 14-member forum will be headed by Bayo Olukoshi, a distinguished professor at the Wits School of Governance in South Africa.