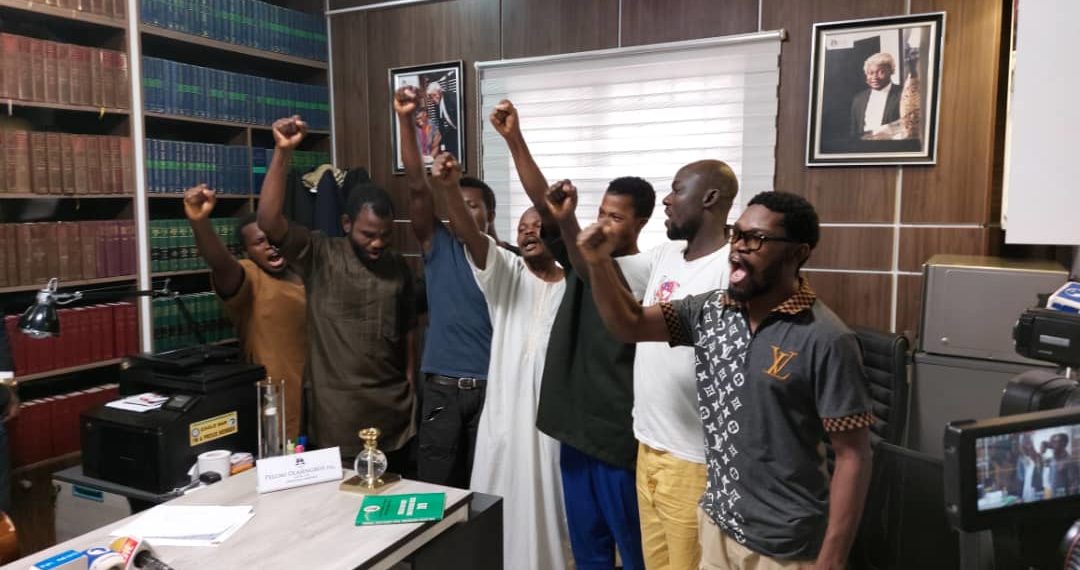 Eight out of 12 aides of Sunday Igboho's aids released on Monday by the SSS.

This comes barely after the expiration of the 48 hours ultimatum issued to SSS director-general to release all the 12 detainees or risk being jailed for contempt.

The State Security Service (SSS) on Monday released eight of the 12 associates of Yoruba nation agitator, Sunday Adeyemo, popularly called Sunday Igboho, and continued holding on to the four others in disobedience to a court order granting bail to all of them.

The detainees’ lawyer, Pelumi Olajengbesi, who continued his demand for the release of the remaining four at a press conference in Abuja on Monday, gave an insight into how eight of them were releases by the SSS.

“We are glad today that the SSS called us this morning (Monday). They have shown seriousness about respecting court orders,” the lawyer noted.

He and his team then moved to the SSS headquarters in Abuja to receive eight detainees who, together with the four others, had been detained without charge for about 61 days.

Mr Olajengbesi said that, for “technical” reasons, all the detainees would have regained their freedom in compliance with the order of court.

“We are hoping that they (SSS) will release the remaining four either tomorrow (Tuesday) or before the end of the week.”

“Every civilised society must allow the law to prevail,” the lawyer said on Monday.

The spy agency had adamantly continued to detain the detainees despite the bail granted them by the Federal High Court in Abuja on August 4.

Mr Olajengbesi said on Friday that SSS refused to release them even after providing 24 sureties and meeting all other bail conditions with a release order of the court signed and served on the spy agency.

The release of eight of the detainees on Monday came barely after the expiration of the 48 hours ultimatum issued on Friday by Mr Olajengbesi to SSS director-general, Yusuf Bichi, to release all the 12 held in custody or risk being jailed for contempt.

It will be recalled that the 12 persons were arrested during an early morning raid on Sunday Igboho’s home in Ibadan, Oyo State, on July 1.

They were subsequently moved to Abuja, where they had since been detained.

Following a request by Mr Olajengbesi, a judge of the Federal High Court in Abuja, Obiora Egwuatu, granted the detainees bail on August 4.

But the SSS was dissatisfied with the ruling, prompting its application urging the judge to reverse the bail granted four of the detainees.

It, however, later withdrew the application, saying it would pursue its objection to the bail granted the four persons at the Court of Appeal.

The judge subsequently struck out the motion following the no-objection response from the detainees’ lawyer.

Mr Olajengbesi disclosed that two of the detainees, whom the SSS had challenged their bail, were among the eight persons released on Monday.

Almost three weeks after the futile attempt to arrest him during the July 1 raid on his home by SSS operatives, Sunday Igboho was arrested in the Republic of Benin while trying to board a Germany-bound flight with his wife on July 19.

While his wife has been released, he is still being held in custody in the neighbouring country facing proceedings.