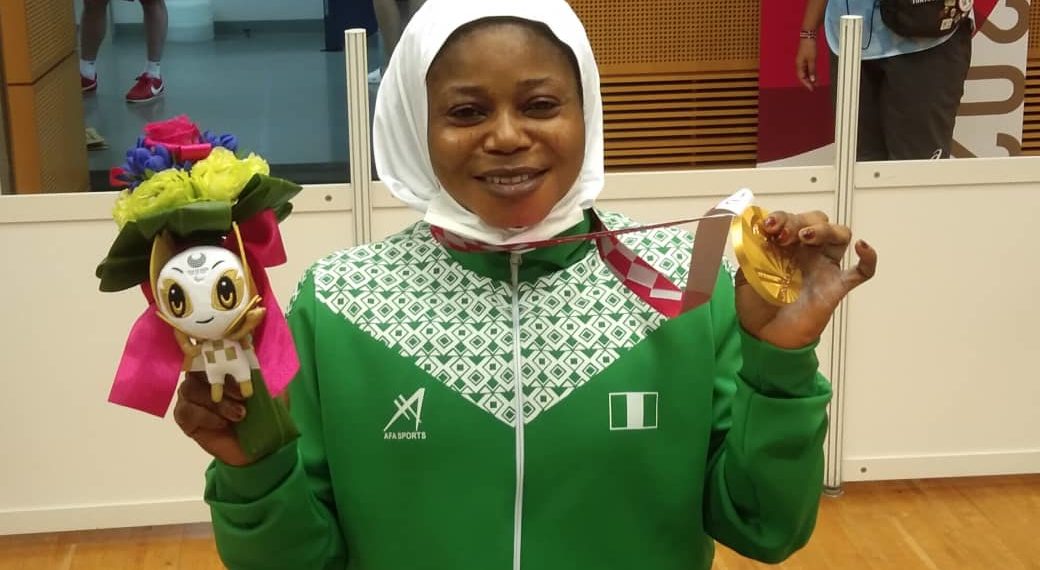 The feat by Tijani is an improvement on her previous record of 106kg at the 2016 Summer Paralympics in Rio.

Team Nigerian has registered its first major success at the ongoing 2020 Tokyo Paralympic Games as one of the country’s powerlifters, Latifat Tijani, won the gold medal in the female 45kg event.

Tijani made a top lift of 107kg to secure the top prize in the category ahead of China’s Zhe Cui who settled for silver.

The Bronze medalist was Justyna Kozdryk of Poland.

The feat by Tijani is an improvement on her previous record of 106kg at the 2016 Summer Paralympics in Rio.

She also won the bronze medal in the women’s 45 kg event at the 2019 World Para Powerlifting Championships.

Before Tijani’s success, one of Nigeria’s para powerlifting medal hope at the Tokyo 2020 Paralympic Games, Yakubu Adesokan, failed to reach the podium in the finals of his -49 class on Thursday morning.

Adesokan returned fourth with a lift of 155kg, conceding the podium to the trio of Qarada Omar Hamadeh of Jordan who won the gold, Le Van Cong of Vietnam, silver, and Mamnadov Parvin of Azerbaijan, bronze.

After lifting 155kg in his first and second attempts, Yakubu attempted but failed 156kg in the third. He desperately moved for 161kg in a subsequent attempt to bridge the gap but also faltered.

Both Qarada and Le Cong made final lifts of 173kg but Qarada gained the advantage with more points from earlier lifts to edge Le Cong.

The result means they exchanged their positions from the Rio 2016 Games in which Le Cong won the gold with 181kg while Qarada finished in silver with 177kg.