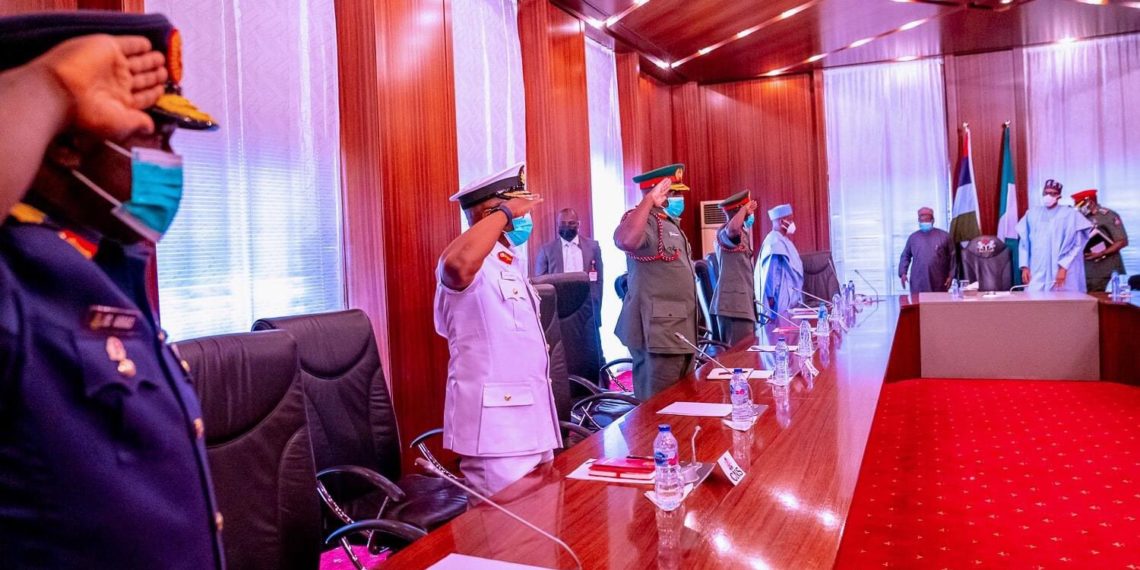 Buhari in a meeting of National Security Council

NAN reports that the meeting may also look into the security implications of the reported mass surrender of Boko Haram insurgents and members of their families in the north-east.

President Muhammadu Buhari is currently presiding over a crucial security meeting with all the nation’s security chiefs and relevant cabinet ministers in attendance.

The News Agency of Nigeria (NAN) gathered that the meeting was summoned to critically analyse the prevailing challenges of security bedevilling the country with a view to charting the best way forward.

NAN reports that the nation’s security forces had, in the recent times, taken the battle more robustly to insurgents, bandits and all other criminals troubling the country.

NAN learnt that the meeting is expected to discuss successes being achieved in the renewed onslaught against terrorism, insurgency as well as the deadly activities of bandits across the country.

The president’s spokesperson, Femi Adesina, in a statement on Tuesday, said: ”The President will be brought up to speed on developments at the Thursday meeting, while plans to bring a decisive end to the challenges will be formulated.”

NAN reports that the meeting may also look into the security implications of the reported mass surrender of Boko Haram insurgents and members of their families in the North-east.

The governor of Borno State, Babagana Zulum, as well as other top security officials were recently quoted as saying: ”Insurgents are now surrendering in droves.”

In attendance at Thursday’s meeting were Vice-President Yemi Osinbajo, Chief of Staff to the President, Secretary to Government of the Federation, Ministers of Defence, Justice, Interior, Police and Foreign Affairs as well as the National Security Adviser.

Baba Ani at 85: Music as a weapon of development, By Lanre Arogundade