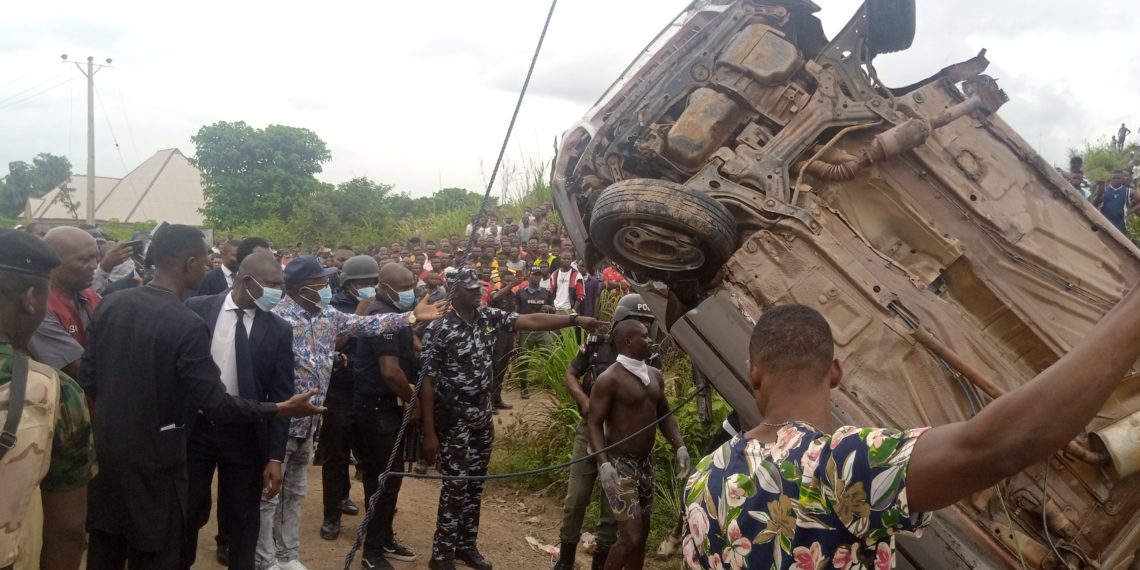 The car retrieved from the Ebonyi mining pit

The youth leader, with two other occupants, believed to be police officers, was on his way to attend a function when his car lost control and plunged into the pit.

The decomposing body of the All Progressives Congress (APC) youth leader in Ebonyi State, Ogochukwu Elem, was on Monday pulled from a mining pit in Abakaliki.

Also pulled from the mining pit were the bodies of two others with him when his car, a Volkswagen Golf, plunged into the pit on Saturday.

A crane supplied by the state Ministry of Infrastructure was used in pulling the bodies, with the help of local divers.

Mr Elem and the other occupants were on their way to Ikwo for a function when the car lost control and plunged into the pit, off the Abakaliki-Ikwo Road.

The incident happened at Enyigba axis of the road in Abakaliki Local Government Area.

Efforts to bring out the victims and the car failed on Saturday and Sunday.

The car has also been pulled from the pit.

The Ebonyi State Governor, David Umahi ,was at the scene of the incident where he helped to direct the search and rescue operations.

Mr Umahi mourned the death of Mr Elem and the two others believed to be police officers who accompanied the late youth leader on the ill-fated trip.

The visibly angry governor condemned the activities of miners who dig mining pits indiscriminately, thereby endangering the lives of the people and destroying the environment.

The governor, who promised that the state government would set up a committee to look into the activities of miners, warned that, henceforth, his administration will not tolerate such practice from miners in the state.

He said: “The accident is still a mystery to all of us. That was the APC youth leader with some policemen that were going for a function and the accident happened.

“We do not know the cause of the accident, we do not know what happened but it’s very mysterious how it happened that even the wages of the sand could not stop them and the small vehicle plunged into a pit that was dug over 20 years and not closed.

“It is very unfortunate and we have been fighting this issue of digging pits, harvesting lead, zinc without closing it back.

“We have been fighting with miners in Ebonyi State over this issue. And so, the Chief of Staff is here who also doubles as the Commissioner for Solid Mineral.

“We are going to identify all the pits in Ebonyi State, whether it was dug for lead, for zinc, or any other mineral in Ebonyi state. We have to identify who did it and then the closing of these pits must commence by next Monday.”

Mr Umahi commiserated with the APC and the police over the loss.