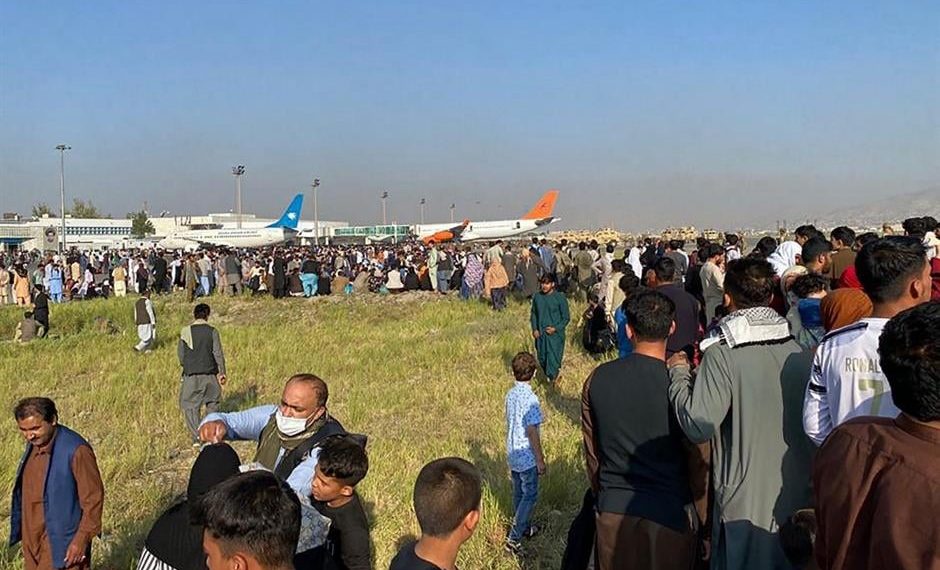 This came a day after the Taliban seized the Afghan capital and declared that the war was over and peace had prevailed.

Five people were killed in chaos at Kabul airport on Monday as U.S. troops guarded the evacuation of embassy staff.

This came a day after the Taliban seized the Afghan capital and declared that the war was over and peace had prevailed.

Witnesses said it was not immediately clear how the victims died.

A U.S. official said troops had fired in the air to deter people trying to force their way onto a military flight that was set to take U.S. diplomats and embassy staff out of the fallen city.

One witness, waiting for a flight out of the city for more than 20 hours, said it was unclear if the five had been shot or killed in a stampede.

U.S. officials at the airport were not immediately available for comment.

Three bodies could be seen on the ground near what appeared to be an airport side entrance, in a video posted on social media.

Reuters could not verify the footage, but another witness said he had also seen five bodies.

The chaos came as Taliban officials declared the war over and issued statements aimed at calming the panic that has been building in Kabul as the militants, who ruled from 1996 to 2001, routed the U.S.-backed government’s forces.

President Ashraf Ghani fled from the country on Sunday as the Islamists entered Kabul virtually unopposed, saying he wanted to avoid bloodshed.

Taliban spokesperson Suhail Shaheen said in a message on Twitter that their fighters were under strict orders not to harm anyone.

“Life, property and honour of none shall be harmed but must be protected by the mujahideen,” he said.

Earlier, Mohammad Naeem, the spokesperson for the Taliban’s political office, told Al Jazeera TV that the Afghan people and the Taliban had witnessed the fruits of their efforts and sacrifices over 20 years.

It took the Taliban just over a week to seize control of the country after a lightning sweep that ended in Kabul as government forces, trained for years and equipped by the United States and others at a cost of billions of dollars, melted away.

ALSO READ: Chaos in Kabul airport as Afghans and foreigners attempt to flee

Al Jazeera broadcast footage of what it said were Taliban commanders in the presidential palace with dozens of armed fighters.

Mr Naeem said the form of the new regime in Afghanistan would be made clear soon and the Taliban did not want to live in isolation, calling for peaceful international relations.

The militants sought to project a more moderate face, promising to respect women’s rights and protect both foreigners and Afghans.

Many Afghans fear the Taliban will return to past harsh practices in their imposition of Sharia religious law.