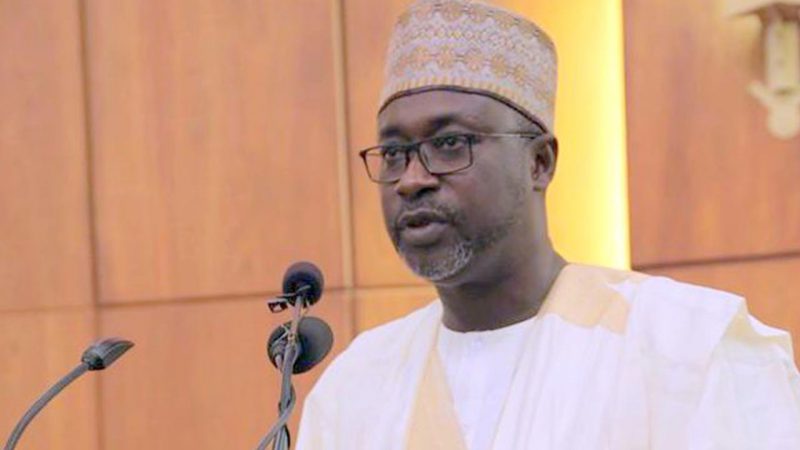 The Water Resources Bill attracted outrage during the Eight Assembly as some Nigerians interpreted the proposed law as a power grab by the federal government.

The Minister of Water Resources, Suleiman Adamu, says he is working with the National Assembly and the Nigeria Governors Forum (NGF) to ensure the passage of the controversial water resources bill.

Mr Adamu, who stated this on Thursday, said the executive bill was drafted by the former President Olusegun Obasanjo’s administration, but resuscitated by the present administration.

The bill, which was introduced in the 8th Assembly, caused outrage, as some Nigerians interpreted the law as a power grab by the federal government.

At the weekly press briefing organised by the presidential communications team in Abuja, Mr Adamu said all the water resources commissioners in the 36 states approved the bill before it was presented to the Federal Executive Council (FEC) in 2016.

He highlighted some of the benefits of the bill while responding to questions from journalists.

He noted that over 97 per cent of the content is already existing in four Acts, adding that the bill intends to consolidate all the existing laws.

Mr Adamu also said the Integrated Water System Management Commission was already doing the work of regulating the sector, hence, the bill will only strengthen the agency.

According to him, “Powers that were hitherto vested in the Minister of Water Resources are being devolved to the communities, to stakeholders within the basins,” he said.

“And what this means is that, whereas based on the Water Resources Act that is existing, I, as Minister can determine where any project can be put without any recourse to anybody.

“The Integrated water system management commission that is saddled with that responsibility was set up in 2007. It’s existing and the Executive Director is here.

“All the people that are mining, they have to go there to get a water licence and they pay a tariff. But right now, they are operating based on delegated powers of the minister. And what we want is for them to stand alone, that means if I can withdraw this delegated these powers anytime and apply them myself.

Mr Adamu said his ministry was lobbying the governors and the legislators on the bill.

“Even the lobbying we are doing it and we will keep doing it. I have addressed the governor’s forum. We even send the bill to the governor’s forum. And they assigned their attorney generals in all the states to look at this bill. I’ve not received any official feedback, but I know that they didn’t find anything controversial.

“One of the governors that is leading opponent of this bill asked me these questions directly at that forum and I answered him. And I know from that day I never heard him speak publicly against the bill again. I guess maybe some people misunderstood, some people don’t read, they didn’t understand the provisions and just took third party information and went to town with it. So we have done that.”

The minister explained that the bill does not affect water bodies within a state, rather, the water that moves across state boundaries.

He said: ”All water bodies that are trans-boundary, that cross more than one state the responsibility is vested on the federal government, is a constitutional issue. There is no violation of the constitution in this bill, it is already there. If they don’t know let them go read the constitution, It is there.

“And it also means that Kogi State or Niger State can go and set up an industry and be spewing poisonous chemicals into the water, and there will be nobody to protect the downstream sector. It never happens no country in the world does not have this kind of regulation. There is nothing new and it is already existing. So we’re not reinventing any wheel.”

Status of bill at National Assembly

The executive bill was introduced to the Senate on November 3, 2017 and passed for second reading on November 22, 2017.

It was introduced to the House of Representatives on May 4, 2017, and passed for second reading and third reading on July 6 and December 19 respectively.

However, the Senate did not pass the bill as senators raised concerns on the bill.

However, Ben Nzondo (PDP, Benue), on October 29 raised a point of order (Matters of privilege) that the procedure used for passing the bill was flawed.

In his ruling, Speaker Femi Gbajabiamiala ruled that the bill should be re-gazetted in line with Order 12 Rule 16 of the standing rules of the House.