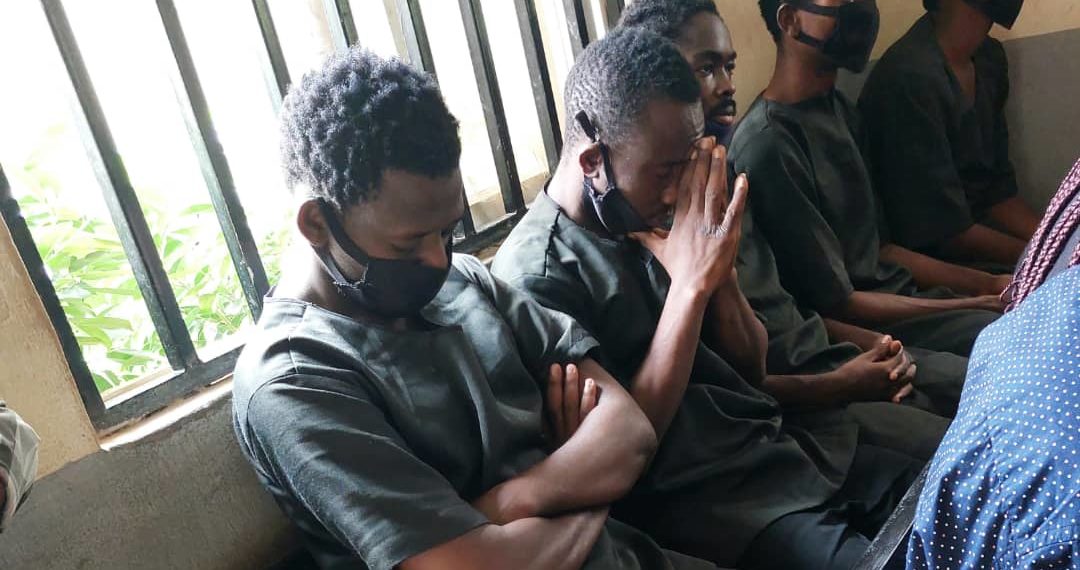 Five 'Buhari-Must-Go' protesters arrested at Dunamis Church by SSS arrive Magistrate's Court at Mpape in Abuja for their arraignment by the secret service on Wednesday.

The detainees want the SSS boss jailed for disobeying the court order directing the secret police to release them from custody.

Five detained ‘Buhari-Must-Go’ activists have commenced a contempt suit against the director-general of the State Security Service (SSS), Yusuf Bichi, for disobeying the court order for their release from custody.

The activists commenced the contempt suit with the filing of a ‘Notice of Consequences of Order of Court, also known as Form 48, on July 30, to push for the jailing of the SSS boss.

Ben Manasseh, Anene Udoka, Henry Nwodo, Samuel Larry and Samuel Gabriel were arrested for wearing T-shirts with the inscription, ‘Buhari-Must-Go’ at the Dunamis International Gospel Centre in Abuja, on July 4.

PREMIUM TIMES reported how the Federal High Court in Abuja ordered the release of the five detainees on July 26, and adjourned the applicants’ main suits each seeking N10million damages, for further hearing.

Instead of releasing the detainees, the SSS rushed to a chief magistrate’s court in Mpape, Abuja, on July 28, to arraign them on charges of disturbance of peace.

The defendants, who pleaded not guilty to the charges, were promptly granted bail by the chief magistrate, Mohammed Zubairu.

On Monday, the chief magistrate issued a notice for the release of the five defendants premised on the grounds that they had met their bail conditions.

Despite being served with the notice, according to Tope Temokun, the SSS has refused to release the detainees.

The defence lawyer, who said the agency was served with the Federal High Court’s order on July 29, noted that as of Monday, his clients were still being held by the spy agency, a development he described as a sign of the country sliding to dictatorship.

“Today is August 2, 2021, the Dunamis 5 are still held by the DSS (SSS) in flagrant flouting of the order of court.

“When a nation is slipping into dictatorship, the first feature is that the organs of government will begin to flout court orders. That is exactly what the DSS is doing today by their refusals to respect and obey court orders,” he said in a statement.

He described the situation of SSS’ disregard for a court order as “our tragedy as a nation.”

‘You may be jailed’

With the SSS remaining adamant, the detainees’ lawyer, Mr Temokun, on July 30, resorted to filing a contempt suit against Mr Bichi for his continued disobedience of the court order for the release of the five young activists.

PREMIUM TIMES on Monday obtained a copy of Form 48, which essentially warns an alleged contemnor of a possibility of being jailed if he or she continues to disobey a court order.

“Note that unless you obey the directions contained in the endorsed order (herewith endorsed), you shall be guilty of contempt of court and shall be liable to be committed to prison,” the Form 48 reads in part.

Attached to the Form 48 is a copy of the July 26 order of Anwuli Chikere of the Federal High Court in Abuja ordering the unconditional release of the detainees.

PREMIUM TIMES reported how the five activists filed separate suits for the enforcement of their fundamental rights last month.

President Muhammadu Buhari, the Attorney-General of the Federation, Abubakar Malami, and the pastor-in-charge of Dunamis church where the plaintiffs were arrested, Paul Enenche, are sued as the defendants in each of the suits.

The applicants sought N10million compensation in each of their suits.

The plaintiffs were arrested at the church for wearing shirts with the ‘Buhari-Must-Go’ inscription, a sign associated with activists calling for President Buhari’s removal on the account of his alleged incompetence in the handling of the worsening security and economic situations in the country.

According to him, the rights are guaranteed under sections 35, 38, 39 and 42 of the constitution of the Federal Republic of Nigeria constitution and under Articles 1, 2, 6, 8 and 9 of the African Charter on Human and People’s Rights (Ratification and Enforcement) Act.”

They are “sacred rights which can only be curtailed in accordance with the law,” Mr Temokun wrote in the court documents.

He also said the “arrest and continued detention” of his clients “for wearing a clothing apparel with an inscription of ‘BUHARI MUST GO!’ without a bail or arraignment, by men and officers under the command of the 1st, 2nd and 4th respondents (SSS, SSS boss, and Dunamis church’s pastor) “constitute a very oppressive violation of the applicant’s fundamental rights.”