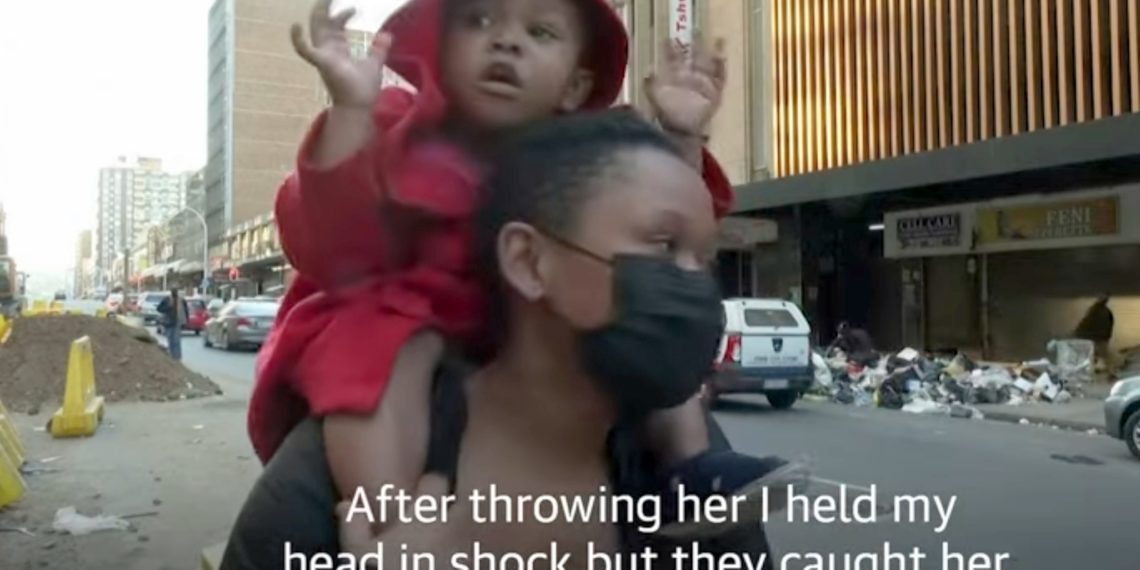 Naledi Manyoni, 26, who threw her two-year-old baby to safety off a building set ablaze at ground level by looters. Credit (Guardian UK)

“They kept screaming 'throw her,'” she said of the rescuers, adding that she had to concede.

Maternal instinct made a mother take the harrowing decision of throwing her daughter to safety off a ledge close to a high-rise burning building set ablaze by looters at ground level amid widespread violence in parts of South Africa.

A petrified 26-year-old Naledi Manyoni held her held head in shock as she released her grip on the 2-year-old girl after she made her way to the first floor of the building with the hope that bystanders would catch her.

“They kept screaming ‘throw her,’” she said of the rescuers, adding that she had to concede because leaving her baby behind was not an option for her.

The footage of the scene showing the brave mother, who told reporters she lived on the 16th floor of the building with her fiancé, has since caught online frenzy.

“After throwing her, I held my head in shock, but they caught her,” Reuters reported Ms Manyoni as saying outside the building as her daughter, dressed in a red coat and hood, sat on her shoulders.

“She kept saying, ‘Mama you threw me down there.’ She was scared,” she added as the girl babbled and clapped her hands.

“What was important was for my daughter to be out of that situation… I couldn’t escape alone and leave her behind,” she noted.

Riots have broken across South Africa with thieves looting shopping malls and other businesses in the major cities in the southern African nation.

Six days of mass looting and rioting in multiple locations across the industrial centre of Johannesburg and other cities such as Vosloorus have taken the death toll to 72 as of Tuesday.

Local police said that most of the deaths “relate to stampedes that occurred during incidents of looting of shops.”

Authorities have ramped up the deployment of soldiers to 5,000 as the police struggle to quell days of looting and violence.

COVID-19: World in early stages of 3rd wave amid Delta surge – WHO