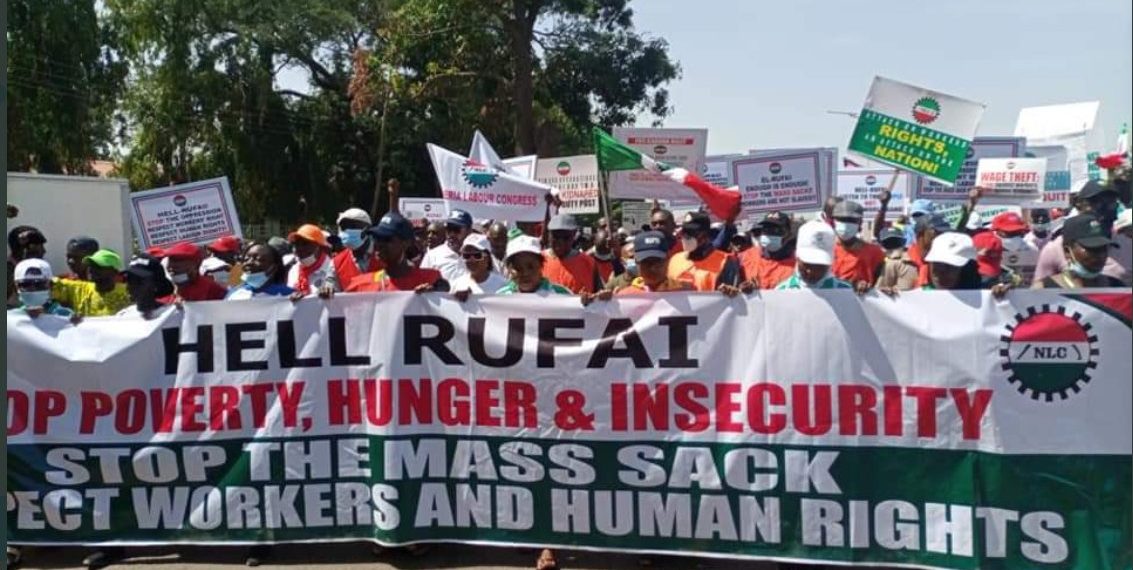 The committee is expected to resolve all the issues in dispute between the state government and NLC.

The Federal Government has inaugurated a 10-man committee to resolve the dispute between the Kaduna State government and Nigerian Labour Congress (NLC) and ensure industrial harmony in the state.

A statement issued by a Deputy Director in the ministry, Charles Akpan, on Saturday in Abuja, said that the committee was inaugurated by Minister of Labour and Employment, Chris Ngige.

The News Agency of Nigeria (NAN) reports that the committee is headed by the Permanent Secretary of the ministry, Peter-Yemira Tarfa.

He urged members of the committee to meet the expectations of President Muhammadu Buhari in ensuring that industrial peace returned to the state.

The minister recalled that the federal government had apprehended the strike initiated by NLC in the state in May, with parties signing a Memorandum of Understanding (MoU) to restore peace.

He said that the intervening circumstances had made the reconstitution of the committee inevitable.

According to him, the committee is expected to resolve all the issues in dispute between the state government and NLC.

Mr Ngige, who acknowledged that the issues in contention bordered essentially on trade disputes, gave the committee 21 days to submit its report.

He urged the committee to resolve the issues holistically and be guided by the 1999 Constitution (as amended) as well as the country’s labour laws.

Mr Ngige noted that downsizing or rightsizing of workforce in any organisation, government or private sector, was a redundancy issue, which must be subjected to the principles spelt out in the Trade Disputes Act, Laws of the Federation, 2004, Cap L1.

“The law says in Section 20(A) that: “in the event of redundancy, every employer shall inform the trade unions or representatives of workers concerned of the reasons for or the extent of their anticipated redundancy.

“Section 20(B) also says that the principles of ‘last-in, first-out’ shall be adopted in the discharge of the category of workers affected, subject to all factors of relative merit including skill, ability and any reliability.

“So, in applying this, we must subject it to the relativity of merit, skill, ability and reliability. If somebody has a forged certificate, he should be asked to go because he didn’t merit the job in the first instance.

“If you go to a nursing home and find somebody working in the ward with a Bachelor’s degree in History, he stands disqualified because he doesn’t have the skill in the first place.

“He has to go. So, these are the qualifications that must be noted in this principle of last in, first out. It is not absolute. It has exceptions and qualifications,’’ he said.

Mr Ngige added that an employer had the right to reduce staff strength of his organisation but he is bound by law to negotiate redundancy payment with any discharged worker.

He asserted that “there was nothing wrong in Kaduna State government stopping the expenditure of 96 per cent of the its earnings on personnel cost in order to save enough for capital projects”, adding, however, “that it must be done within the ambit of the law.”

According to him, schedule two of the 1999 Constitution clearly states issues that are contained in item 34 of that schedule which are beyond the powers of state governments to act upon.

He said that they included matters relating to labour unions, industrial disputes, arbitration and conciliation as well as the National Minimum Wage, all exclusive to the purview of the federal government.

Meanwhile, the minister informed the committee of the expectations of the president on the speedy return of industrial harmony in the state, more so at a time the state was facing the challenges of armed banditry.

“Mr President has asked me to inform you of his expectation that peace returns to Kaduna, which has been his state of residence and home to many retired generals, permanent secretaries and seasoned administrators, amongst others of Northern Nigeria extraction.

“So, I appeal to you to approach this assignment with conciliation at the back of your mind so that we don’t have a repeat of what happened in May.

“I use this opportunity to appeal to you, as the minister of labour, father of labour unions and friend of Kaduna State, that we should tread the path of peace. With peace, we can make progress, both as government and as labour union,” he said.

Also speaking, Kaduna State SSG, assured of the state government’s commitment to restoration of industrial harmony, adding that government was not at war with labour.

In his remarks, NLC President, Ayuba Wabba, said that labour was committed to the resolution of the impasse in the state.

“I pray that it will be the last dispute between labour and Kaduna State government. This is a labour matter that can be resolved and should be resolved,” he said.

PREMIUM TIMES reported how the NLC suspended its five days warning strike in Kaduna State in May after the process was marred by slight violence and conflict.

Mr Wabba had said the decision “is to honour the invitation of the Federal Government on Thursday to mediate in the dispute between labour and the Kaduna State Government”.

On 5 June, it threatened to go back to the trenches if its demands for Kaduna workers were not met.