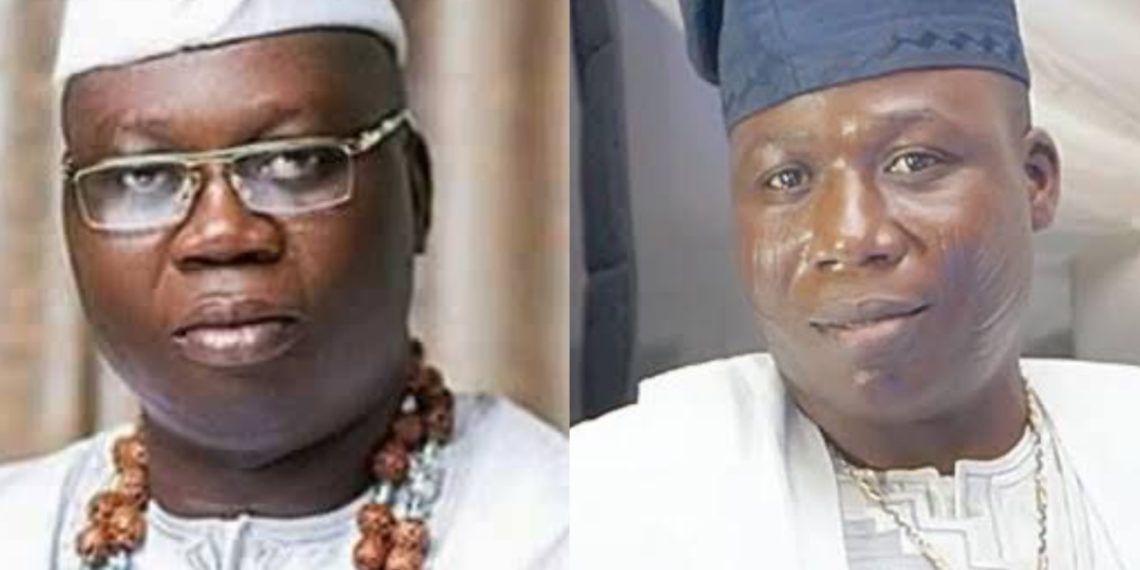 “At this position I am now, I can’t be jumping up and down like him. But any statement I issue is more powerful than that in 10 years."

The Aare Onakakanfo of Yoruba land, Gani Adams, has said Sunday Igboho, an agitator for a Yoruba nation, is using wrong methods to demand self-determination.

Mr Adams said rather than engage traditional rulers peacefully and get their support, he focused on propaganda.

He made his position known in a video that went viral on social media on Wednesday.

His spokesperson, Kehinde Aderemi, did not respond to calls and text messages seeking clarification on the place and time the video was made.

Mr Adams said Mr Igboho’s threat to forcefully reopen the borders and claims that 1,000 policemen would not return if they invaded his house were reckless.

“He should caution his talkative followers so that they won’t put him into trouble. I told him some time ago that those people surrounding him are agents of a politician in Lagos. I told him it is better to train your trusted soldiers than to hire mercenaries who will later go for the highest bidder.

“Don’t cause more damage to this freedom fight. Let the elders wade in. Even if any Oba or leader talks against you, don’t abuse them. Let’s begin to preach our gospel to win more souls. You said you wanted to go and open the borders. That will be the beginning of war. You don’t need to say that. It will be counterproductive.

“You don’t have war materials, you were molesting the Army. You said if 1,000 policemen visited your house, 100 would hardly return safely. You don’t need all that. Propaganda should not be too much in self-determination.”

The Aare Onakankanfo, however, pleaded with traditional rulers, top politicians and other leaders in the region to ensure that Mr Igboho escapes persecution.

“I beg the Ooni of Ife, the Alake of Egba and all other Yoruba leaders. If a son offends his father, the father will forgive him. Let us unite to use another method for our liberation. We are not saying we should adopt Sunday Igboho’s method.

“As the Aare Onakakanfo, I am begging you. Assuming he and his followers had not insulted me before, you will say that is why I’m saying this. But a leader without the spirit of forgiveness is an enemy of God. I beg the governors too.

“At this position I am now, I can’t be jumping up and down like him. But any statement I issue is more powerful than that in 10 years. I sit on a strategic institution in the entire Yoruba and I must be conscious of my behaviour so that I will not disappoint the institution. The institution has been in existence in the past 500 years. Our youths, let’s be coordinated, let’s be strategic,” he said.

Mr Igboho, while speaking at a meeting with the Yoruba in Diaspora, last February described some prominent Yoruba leaders, including the Ooni of Ife, Enitan Ogunwusi, former governor of Lagos, Bola Tinubu; Oyo State governor, Seyi Makinde; and Oluwo of Iwo, Abdulrasheed Akanbi, as “Fulani slaves.”

He later sought the forgiveness of Mr Ogunwusi. The Ooni forgave him.

The SSS raided the home of Mr Igboho last Thursday, destroying vehicles, including his G-wagon, Prado Jeep, and some valuable properties including furniture, and windows.

The attack occurred barely 72 hours before the planned rally in Lagos by Mr Igboho and others to further canvas a Yoruba nation.

The spokesperson of the SSS, Peter Afunaya, who confirmed the raid in a press conference in Abuja said seven AK 47 rifles were recovered, alongside pump action guns and 5,000 rounds of ammunition including other weapons.

He said security operatives recovered the weapons after a “hot gun duel between them and Igboho’s guards.”

The SSS also admitted that two of Igboho’s men were killed in the process while a security agent was shot on the right hand and is currently responding to treatment.

Mr Igboho was also declared wanted by the secret police. He has, however, since denied the report on recovered weapons.

Many Nigerians have since then demanded the release of those arrested but they are still in SSS custody.