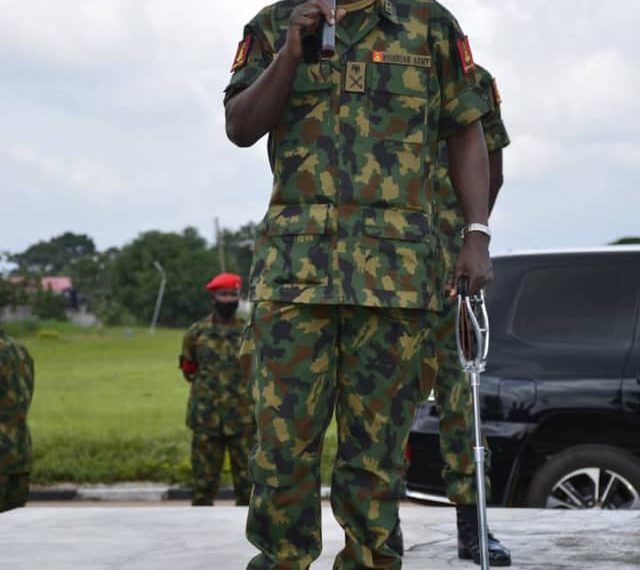 The COAS saluted the courage, patriotism, loyalty and commitment of Nigerian Army troops in defense of the nation.

The Chief of Army Staff (COAS), Faruk Yahaya, has lauded troops of 82 Division of the Nigerian Army for quelling insurrection and arson within the South-east

The service was to celebrate the 158 anniversary (1863 – 2021) of the Nigerian Army and its service to the nation and humanity.

Mr Yahaya, who was represented by the General Officer Commanding of 82 Division, Taoreed Lagbaja, saluted the courage, patriotism, loyalty and commitment of Nigerian Army troops in defense of the nation.

According to the COAS, I must congratulate the troops for the exploits and achievements so far in the country especially in quelling insurrection, arson and other forms of criminality in the South-east.

He noted that the Nigerian Army troops had continued to pay sacrifices and at times ultimate sacrifice of lying down their lives for the peace, security and oneness of the country.

Mr Yahaya also condoled with families and friends of fallen heroes particularly the immediate families they left behind.

”We must do all to take care of them and show them a sense of belonging.

“We must learn to spare little bread, money and kind words for the families of our fallen heroes.

“The government is trying but most times it is not enough. We must support them,’’ he said.

The COAS also urged officers and soldiers to ensure they protect themselves against COVID-19, adding that all non-pharmaceutical measures of protection must be strictly observed.

“Please, you do well by wearing your face masks, washing your hands regularly with soap in running water and observing social and physical distancing as well,’’ he said.

In a sermon, Cosmas Nwankpa, Deputy Director Chaplain Services (Roman Catholic), said the celebration called for stock-taking, sober reflection, introspection and prayers for the Nigerian Army and the nation at large.

Mr Nwankpa, a colonel, who is a Reverend Father, also urged troops to remain focused, loyal and do all to ensure peace, security and calm return to all parts of the country.

“I want officers and soldiers to remain professional in the discharge of their duties and operate within the ambit of the rules of engagement to win the trust of the civilian populace,’’ he said.

The service featured special prayers for peace in the nation and protection of her leaders as well as for the success of the Nigerian Army, for retired and discharged colleagues and for the wounded, widows and orphans of the army.