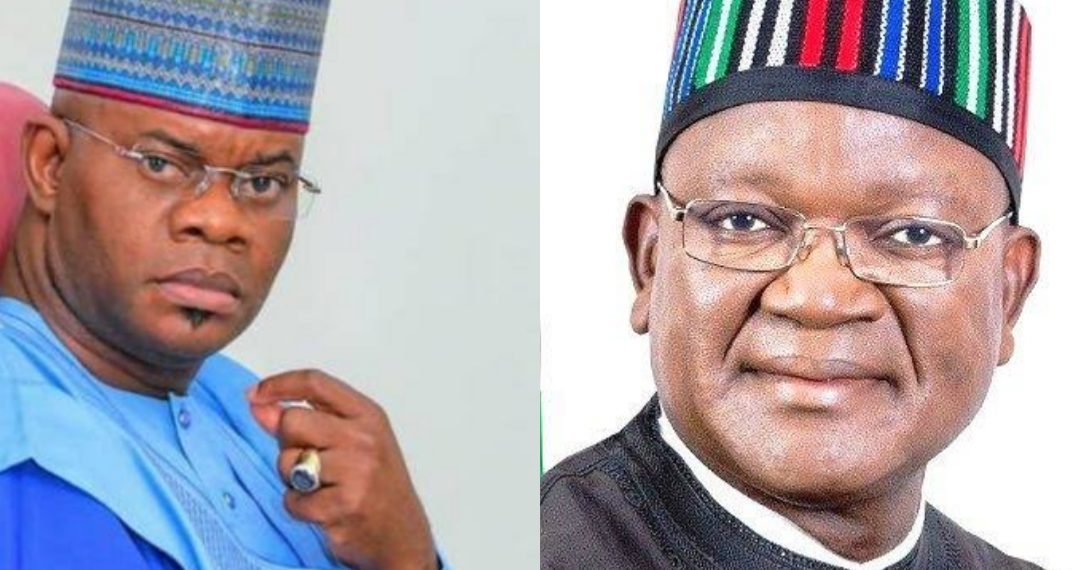 Governors Yahaya Bello of Kogi, and Samuel Ortom of Benue

PREMIUM TIMES reviews the status of the panels set up to probe acts of police brutality in the wake of the October 2020 #EndSARS protest in the six states in the North-central region.

The judicial panels of inquiry set up to investigate cases of police brutality and human rights violations have concluded sittings and submitted their reports in all the North-central states with the exception of Kogi and Benue States.

The two states are behind Kwara, Plateau, Niger and Nasarawa whose panels have submitted their reports.

It will be recalled that the federal and state governments had agreed to set up the panels to address grievances that fuelled the historic #EndSARS protests against police brutality in October 2020.

The #EndSARS protests led to the disbandment of the Special Anti-Robbery Squad (SARS), the notorious police unit whose inhuman activities triggered the protests.

The protests gained ground in the southern parts of the country and the North-central region, but only held in only a few of the 13 states in the North-west and North-east regions.

Some panels across the country have concluded their public hearing and submitted their reports to the governors of the respective states.

PREMIUM TIMES gives you an update on the status of the panels in the North-central states.

The panel, after concluding hearing on the 17 petitions it received, submitted its report to the government on February 24, 2021.

Presenting the report at the Government House in Minna, Mr Usman said 53 witnesses appeared before the panel, while 50 exhibits, including three teeth of a young lady, three death certificates, 33 empty teargas canisters and four bullet shells, were tendered.

“Your Excellency, in the course of our two months sitting, we saw the good, the bad and the best of the personnel of Nigerian police,” had said during the period of the inquest.

As part of its recommendations, the panel awarded N6 million compensation to a woman whose husband was extra-judicially killed by the police.

The eight-member panel had its public hearings at the State Ministry of Justice in Lafia, the state capital.

The panel, headed by Badamasi Maina, a retired judge, submitted its report to Governor Abdullahi Sule on April 29.

It awarded N480 million as compensation for victims of police brutality and recommended improved welfare conditions for men of the police force.

Governor Sule, in his response, during the presentation ceremony, assured that the panel’s report would be deliberated upon at a meeting of the state executive council.

This would be followed by the recommendation of the Attorney-General of the state, which would be acted upon by the government, Mr Sule noted.

Also in October 2020, Governor Simon Lalong of Plateau State set up the state’s judicial panel of inquiry to investigate complaints of police brutality and related extra-judicial killings in the state.

The panel submitted its final report in mid-June, recommending the award of N152 million as compensation to victims of police excesses.

The panel submitted the report at a banquet as part of the June 12 Democracy Day activities in the state.

The chairman, Philomena Lot, said N152 million was recommended as compensation for the families of petitioners, adding that a careful implementation of the panel’s recommendations, especially payment of damages to victims, is crucial in dousing tensions.

Mr Lalong promised that all recommendations of the panel concerning the state government would be implemented.

He said others requiring the intervention of the federal government would be forwarded accordingly.

After a series of public hearings, the panel submitted its report to Governor Abdulrahaman Abdulrazaq on February 25.

Mr Garba said if the government adopts the recommendations of the panel, it will help to support victims of identified cases of police brutality and improve the living conditions of serving and retired police officers.

“The report is in three volumes; Volume 1 is the main report, Volume 2 contains the petitions received and adopted by the panel, while Volume 3 contains the list of all the exhibits tendered and admitted during the panel’s proceedings,” he said.

He added, “The main report contains proceedings, our findings and recommendations on each of the 25 petitions received and treated holistically by the panel.

“It is therefore our hope that the recommendations therein if adopted by the government will wipe the tears and put a smile on the faces of all the victims of police brutality and even the serving and retired police officers inclusive.”

The panel recommended, among others, that some erring SARS operatives indicted for unlawful activities be prosecuted and legitimate petitioners compensated with varying sums of money.

The report also recommended that officers of the Nigerian police be made to enjoy adequate training and their salaries and emoluments reviewed upward to reduce excesses and improve productivity in the system.

Governor AbdulRahman AbdulRazaq ,however, promised to set up an implementation committee on its recommendations.

While the four states are looking forward to implementation, the panels in Benue and Kogi States are yet to conclude the public hearing.

In Benue, Governor Samuel Ortom inaugurated members of a Judicial Panel of Inquiry into human rights violations by police and its disbanded notorious SARS unit.

At the inaugural sitting, the chairman of the panel, Adam Onum, a retired judge, explained that the panel, which had a six-month lifespan, would sit three times a week until there was a need to increase the number of days.

Both states’ panels are yet to submit their reports to the state governments.

According to Justin Gbagir, the chairman of Nigeria Bar Association (NBA) in Makurdi, Benue State capital, the public hearing was stalled by the judiciary workers strike that lasted two months.

Mr Gbagir told PREMIUM TIMES that the panel will soon resume its hearing in Makurdi since the workers have resumed.

On his part, the chairman of the Kogi State panel, Ibrahim Alhassan, a lawyer, said his committee is rounding off and will make its report available to the state government soon.

“So far, we received six petitions. Two of the people did not show up. One of them, his cow was detained in a police station since 2016. Another, his house was demolished and the police are still investigating,” Mr Alhassan told our reporter.

Assessing the success of the #EndSARS panels, public affairs analysts in the region said the commissions have not achieved the purpose they were set up for

“To me, the protest should have continued as it almost addressed our national problems. The panel is a distraction created by the federal government of Nigeria as this is clothed in the same illegitimacy, the hallmark of life and living in Nigeria today,” Daniel Makolo, a lawyer said.

The Executive Director of Brain Builders Youths Development Initiative (BBYDI), Abideen Olasupo, faulted the lack of transparency of the state governments and implementation process for panels that have submitted the report.

“Has the government given the people access to the full reports?,” he questioned, citing the case of the Kwara State government.

Mr Olasupo, however, said the panels are not successful until the reports have been implemented to the letter.

Why we were evicted from Kwara Stadium – Saraki’s football club