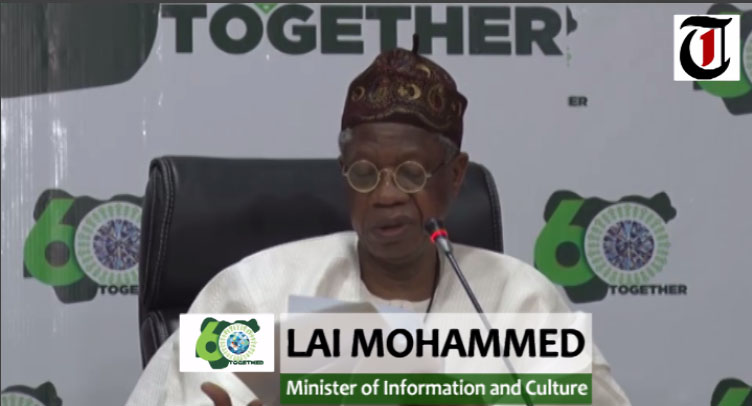 The Nigerian government suspended Twitter from operating in Nigeria on June 4.

The Minister of Information, Lai Mohammed, on Tuesday said the Nigerian government relied on the constitution, National Security Act, the Cybercrime law and Companies and Allied Matters Act, (CAMA) before it decided to suspend Twitter’s operations.

Mr Mohammed again explained why Twitter was suspended from operating in Nigeria.

He cited the activities of the Chief Executive Officer of Twitter, Jack Dorsey, during the EndSARS protests as one of the reasons for the ban.

Mr Mohammed spoke on Tuesday at the investigative hearing organised by the House of Representatives joint committees on Information, National Orientation, Ethics and Values alongside the National Security, Justice and Commerce, on the controversial ban.

The House had on the 8th of June resolved to investigate the ban of the microblogging site by the federal government.

The government suspended the microblogging site on June 4, stating that its activities were inimical to the unity of Nigeria.

On Tuesday, the government set up a committee headed by Mr Mohammed to negotiate with Twitter.

At the hearing, the minister decried the role played by Twitter during the EndSARS protests last October, saying that it did not only retweet the messages of the protesters but also raised funds for them.

“Nigerians have forgotten that these same EndSARS protests led to the death of 57 civilians, 37 policemen and 6 soldiers. We had about 246 government-owned properties destroyed, 200 brand new buses belonging to the Lagos State Government were razed to the ground, 83 warehouses were vandalised, and yet, Jack Dorsey crowdfunded the activities of EndSARS, that is why we said the activities of Twitter are suspicious.”

While responding to questions on the legality of the ban, Mr Mohammed cited section 45 of the 1999 Constitution, the National Security Act, the Cybercrime law and Companies and Allied Matters Act CAMA as the laws guiding the government.

“(a) in the interest of defence, public safety, public order, public morality or public health; or

“(b) for the purpose of protecting the rights and freedom of other persons.

“Hon members, the only reason we suspended the operation of Twitter was because it was promoting disunity in Nigeria and became a national security risk.

“As you can see the provision of section 45, leaves no one in doubt, that provision of section 39 is not absolute. The right to freedom of expression within the context of 39 makes it a qualified right in light of aforementioned section 45 which permits the restriction of civil liberty in the public interest.

“In this case, the federal government deemed the activities of Twitter in Nigeria to be inimical to the stability of this country.”

Meanwhile, the chairman of the committee, Segun Odebunmi (APC, Oyo), said the committee will present its report to the House.

He said, “Like I said in the beginning, this is an investigative hearing, we are gathering our facts, and we will report back to the House by the special grace of God. So far so good, We have been armed with why Twitter was suspended.

“To the journalists, we have done our own, we will push it back to you. This is the country where we all belong. We should do everything humanly possible to sustain this country.”