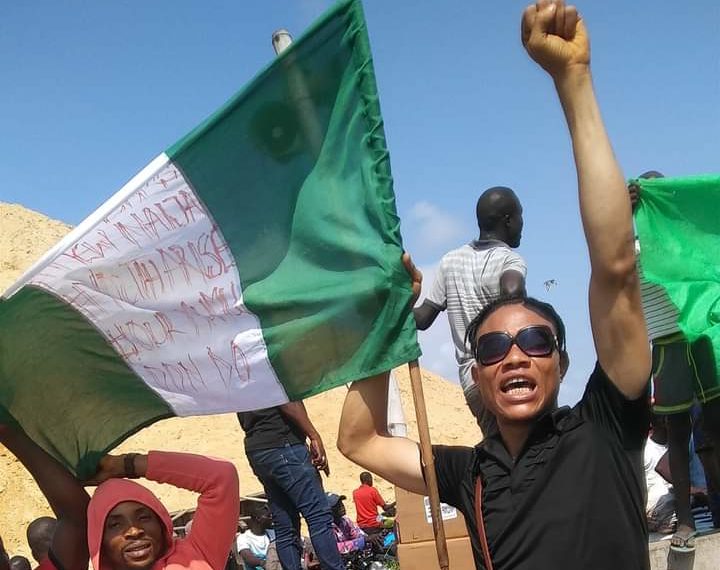 For eight months, Nicholas Mbah, an up-and-coming music artiste, and hair stylist was illegally detained in Kirikiri Prison, Lagos, for participating in the #EndSARS protests in October 2020.

Mr Mbah was arrested by the officials of the Lagos State Task Force in the Ojo area of Lagos on October 29, 2020.

He was accused of being part of the anti-police brutality protests which later turned violent after it was hijacked by hoodlums in different parts of the country.

Many Nigerians were arrested randomly in the wake of the #EndSARS protests and detained illegally. One of them is Mr Mbah who spent two nights in Ojo Police Station, a week in Panti in Yaba and several months in Kirikiri prison. In this interview with PREMIUM TIMES‘ Kabir Adejumo, Mr Mbah narrates his experience.

PT: How were you arrested

Mr Mbah: I participated in the #EndSARS protest in Ojo, Lagos, and my area was peaceful and calm. There was neither any fight nor destruction. The protest stopped on October 20, but I was arrested a week after which was October 29, 2020.

I went to the bank to get my statement of account which was not even successful that day. On my way going home, the Ojo policemen started harassing me that they recognised my face as one of the leaders of #EndSARS protesters. They started questioning me. Before I could give any response, they started beating me. They forced me into their vehicle.

I was taken to Ojo police without hearing from me. This was because some hoodlums damaged their police station and I was not in any case part of the damage. The policemen did not allow me to talk, instead they dragged me into the cell. This thing happened around 8:30 a.m.

PT: Were you allowed to reach out to your lawyer or family members?

Mr Mbah: Not at all. They collected my phone, the keys to my house and shop – aside from being into music, I am also a hair stylist. So, they took all my keys and other belongings. Before my family knew, I already spent two days in Ojo police station. My family never knew where I was. They traced me to the station after they repeatedly called my number for two days and no one was answering their calls.

I was mandated to write a statement and told to lie against myself but I resisted. The man who claimed to be the IPO (investigative police officer) started beating me and they threw me into the cell. The police brought me out the next day and again asked me to write my statement.

PT: When they told you to write down lies against yourself, did you obey them?

Mr Mbah: I wrote the truth of the matter and never allowed them to influence my account of the incident. They then took me alongside others arrested to Panti in Yaba. They handed over our belongings to Panti people and told them we were #EndSARS protesters. By this time, my family members already went to Ojo police station to inform the police that I was missing but the officers in Ojo told them that I was arrested and had been transferred to Panti.

Before they could make plans to come to Panti and get a lawyer, it was the next day. I was not even given access to the lawyer when we got to the Magistrate’s Court of Lagos State sitting at Yaba on November 2, 2020. The police didn’t allow me to say a word in the court. They just told me to say “yes” or “no” to charges against me. They accused me of conspiracy to commit felony, armed robbery, arson and rioting.

I was confused when they read the charges. So, I raised my hand and told the court that if saying “yes” means that I did all they read, then my answer is “no”, but I wasn’t listened to. After the court session, they took me back to the black maria (police van) in which I was brought to court, and returned to Panti.

Then the next morning by 2 a.m. they drove me and other people with various issues to Kirikiri (prison).

PT: Do you mean in the middle of the midnight?

Mr Mbah: Yes. Seriously speaking, it was terrible. In the black maria were different criminals. If I am not mistaken, the black maria was jam-packed with between 80 to 100 people. I am sure most of the guys I was packed with were cultists. I saw some of them in court a day before and they knew my girlfriend offered me some cash when she joined me in court. Immediately I was pushed into the black maria in the midnight, one of the bad boys told others to search me that I was a big boy and that I had money.

They called me “Oyinbo” (fair complexioned) and before I could bring out the money, they rushed me and beat me up. I am not happy narrating this. Since the first week of November 2020 that I landed in Kirikiri prison, I was not released until June 15, 2021.

PT: What was the experience like in Kirikiri? Did you by chance see your loved ones?

Mr Mbah: No. In fact, my case was adjourned consistently and it looked like the aim of the government and police was just to make us ‘rust’ in prison. I met with various bad boys in the prison. The experience was terrible. Already, I had a surgery before the incident occurred. I was suffering from hemorrhagic complications and my condition worsened in detention. The surgery was still in the process of healing, but the torture I was subjected to made me experience pain.

In Kirikiri, they called the newcomers “Alejo”, the Yoruba word for visitor. As an Alejo in prison, I cannot talk. We have fellow inmates who were hardened criminals. By merely seeing my cell mate in Kirikiri, fear overwhelmed my body. I had to beg the marshal in the prison room that I was sick and needed his help.

PT: Who was the marshal?

Mr Mbah: The leader in my prison. I shared my pains with him and I told him I would like to visit the hospital in the prison so that I could get small treatment. In my cell, criminals had different ranks. The marshal then told a fellow inmate, who was commissioner of health in my prison, to alert the necessary authorities. I was taken to the hospital in the prison and examined by a doctor. The doctor later told someone to call the marshal and he begged the marshal not to allow anyone to manhandle me in the cell because I was in a critical condition.

That’s how I began to have some “freedom” among my fellow inmates.

PT: How long did it take you to adapt to the prison?

Mr Mbah: It took me three to four months. My family members kept coming but were not permitted to see me. The food inside prison was another hell. I ate food that cannot be offered to dogs. It was like there was a chemical they put in the food that weakened one’s bone and entire body system. It was more of beans or garri. The prison officials didn’t touch me. The only torture I got was punishment from my fellow inmates.

I packed “shit” (feaces) and underwent some punishments. There is what they call “jamming” in prison and it means assignments (tasks). It may be packing faeces or any kind of job. I mean you dig a bucket in the pit and pack faeces. You may be asked to fetch water for prison officials to take their baths.

Not that I didn’t meet bail conditions but some documents were withheld from my lawyer. They accused my lawyer of being arrogant. We were on this till the court went on strike for over 60 days. I felt no relief. There was no joy. Every night was like a nightmare until I came out last week.

PT: With all of these experiences you had, do you regret participating in #EndSARS protests?

Mr Mbah: Why can I regret? Can I regret speaking for my freedom? My protest was not to fight the government, but to demand what is needed in the society. I never had any family member in police custody. I never suffered police brutality before the protest, but I needed to speak for others. We are not supposed to close our mouths. As long as I am protesting without arms, I will continue to protest when things are wrong. It is not a one-man show. We cannot live in fear. It is meant for everybody and the time to achieve justice is now.

The only sad thing is that the eight months in prison has rendered me homeless and my health condition has worsened. I have not even got to my house. My phone and other belongings are still in Panti. I currently squat at a friend’s place but that’s not enough to say that I regret participating in the protest.