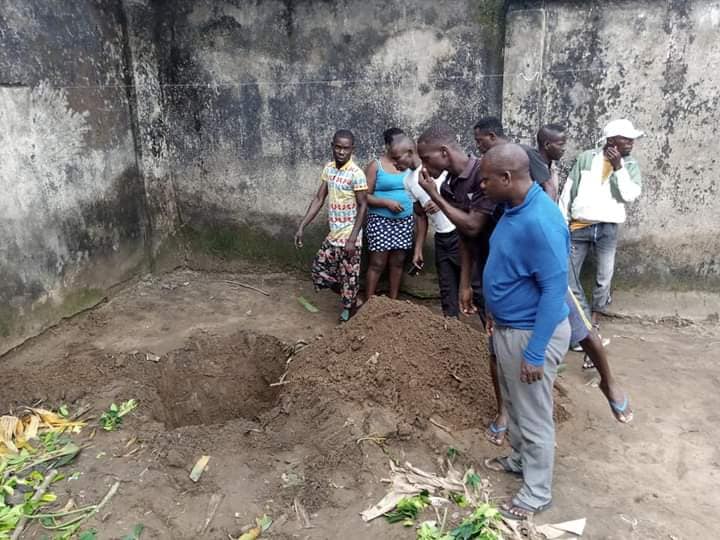 The shallow grave where the pastor buried the slain wife.

People became suspicious when the pastor’s children complained that they hadn’t seen their mother after she had a quarrel with their dad.

A pastor in Akwa Ibom State, Nigeria’s South-south, has been detained by the police for allegedly killing his wife.

The incident happened at a village called Ikot Ataku, Okon, in Eket Local Government Area. The pastor has been identified as Chris Enoch, the founder of Omega Word Global Ministries.

He is from Ebonyi State, Nigeria’s South-east.

The youth president of Okon Clan, Effiong Johnson told PREMIUM TIMES, Wednesday night, that Mr Enoch killed the wife, Patience, seven days ago and buried her corpse in the shallow grave inside their gated compound where they have been living with their five children.

The eldest child is 15 years old.

Mr Enoch’s church has been operating inside the same compound which is rented.

The community became suspicious when the pastor’s children complained to neighbours that they had not seen their mother for days after she had a quarrel with their dad.

The youths of the community, led by their president, Mr Johnson, who is also a ‘community police officer’, went to search the pastor’s compound and were shocked to discover the woman’s corpse buried in a shallow grave. The youths handed over the pastor to the police.

The slain woman was a petty trader who used to sell pastries in the local market.

“I am just coming from the (police) station now, he just opened up that he killed the woman about seven days ago,” Mr Johnson said.

“From what the children said, they (the pastor and the wife) had been having issues and sometimes he would say in front of the children that he would kill the wife and nothing would happen.

“On this particular day, the man chased the children away when he and the wife started fighting,” he added.

The Clan Head of Okon, Akpabio Inyang, has visited the scene of the incident.

When contacted, the Divisional Police Officer in Eket, Sunday Digha, refused to comment on the incident.

He said the reporter should speak with the police spokesperson in the state.

The police spokesperson, Odiko MacDon, did not respond to calls from our reporter as of the time of filing this report.