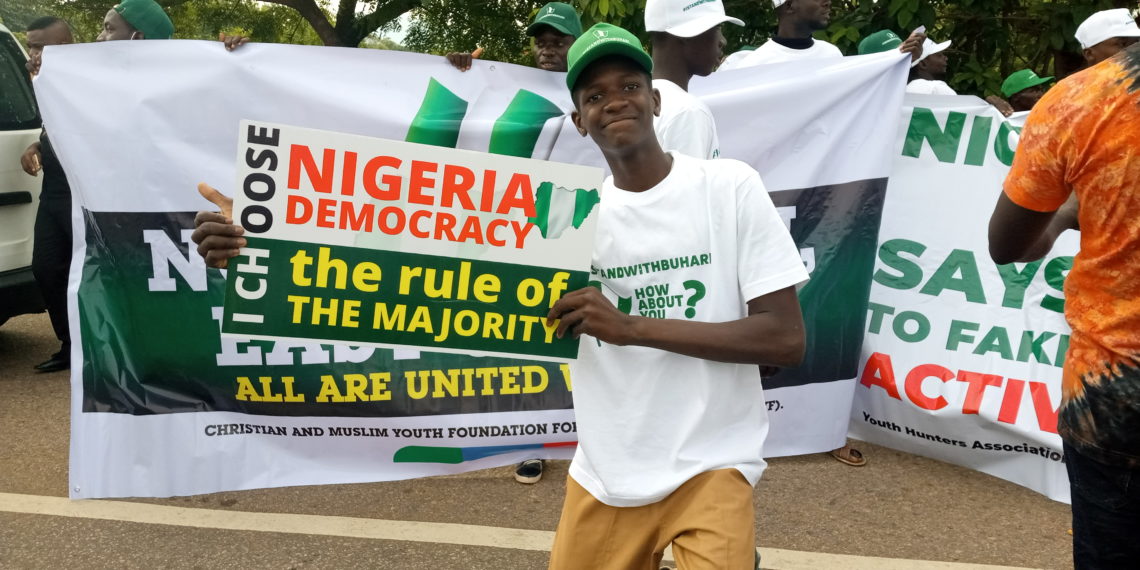 EXCLUSIVE: We were promised N2,000 each to attend pro-Buhari rally – Protesters

Some of the pro-government protesters sporting branded T-shirts with inscriptions in praise of President Buhari told PREMIUM TIMES they were promised between N2,000 and N2,500 to attend the counter-protest.

Some pro-government protesters have revealed how they were recruited to join a rally aimed at countering the mainstream June 12 protests on Saturday.

Civic groups and activists had chosen the June 12 Democracy Day to express their grievances against the Muhammadu Buhari-led government, which they accused of poorly governing Nigeria and being lackadaisical in its handling of the country’s worsening security situation.

But in a move to overshadow the mainstream protests, hundreds of protesters sporting branded T-shirts with pro-Buhari inscriptions also trooped to the streets of Abuja on Saturday.

Some of them who randomly spoke to PREMIUM TIMES at Unity Fountain, Abuja, said they were promised to be paid between N1,500 and N2,500 to attend the counter-protest.

“I was in my area when they called me to come to do something. They promised to pay us. Some are promised N2,000 while some have been promised N1,500,” Abdul Yusuf told this newspaper on camera.

Mr Yusuf, in his branded T-shirt, physically exhausted from the rally, said they were mobilised by their leader, Muhammad Garba, from Area 1 District in Abuja.

“They’ve not paid but I know that they will pay,” he added as he made to leave, probably for Area 1, to receive the promised payment.

Mr Yusuf’s story was corroborated to this newspaper by at least four other protesters at the location, among whom were two teenagers walking home after the event.

One of the teenagers who identified himself as Muhammadu said they were invited for a meeting in support of Nigeria’s president and were promised N2500 each.

“We were promised 2,500 but we have not been paid yet,” he said in Hausa language.

Except Mr Yusuf who said he was contracted to appear at the scene till 11a.m., none of the other pro-Buhari protesters divulged who called them to join the protest.

PREMIUM TIMES however, identified a fair-complexioned and sturdy man issuing directives to the protesters on what to do and how to do them at the protest ground.

He even promised to deal with one Musa whom he paid to bring drums to the protest ground.

The June 12 protesters had slated the Unity Fountain, opposite Transcorp Hilton in Maitama, as their convergence venue, but they could not gain access to the venue due to the presence of pro-government rally-goers.

The pro-government protesters donned branded T-shirts with inscriptions like, ‘Are you with BUHARI?’ and placards with inscriptions such as ‘Thank you for being champion of anti-corruption in Africa, PMB’, ‘North, South, East and West are united with PMB’.

PREMIUM TIMES reports that while security operatives allowed the pro-government rally to be held at Unity Fountain in Maitama, Abuja, they dispersed the June 12 anti-government protesters with teargas in the Gudu area of the capital city.