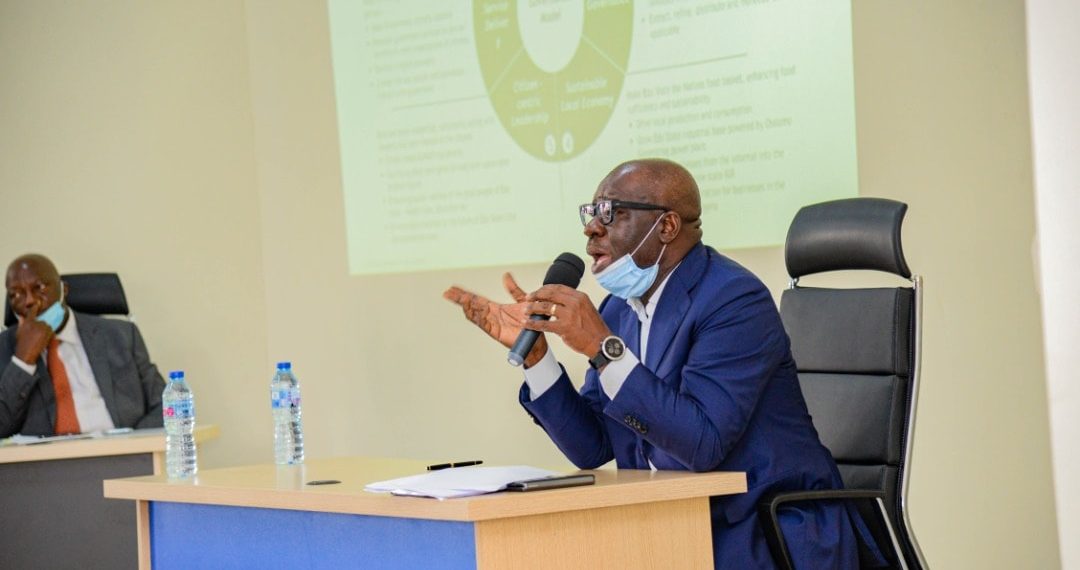 The suspended chairman had accused Mr Obaseki of marginalising the PDP in his political appointments so far and also making moves to sack the party structure in the state.

The Chairman of the Peoples Democratic Party (PDP) in Edo State, Tony Aziegbemi has been suspended from office for alleged misconduct.

This is contained in a statement issued on Wednesday by the spokesperson of the party in the state, Chris Nehikhare.

Mr Nehikhare said the suspension was based on the decision of the State Working Committee (SWC) of the party.

“The SWC suspended the chairman for gross misconduct by brewing unnecessary tension and disunity among party members in the state.

“The suspension was ratified by two third of the SWC members at the meeting on Tuesday in Benin.

“The SWC resolved in a motion that Aziegbemi should step aside until the determination of the allegations against him,” he said.

Mr Nehikhare added: “Among the allegations, Aziegbemi was accused of gross misconduct by brewing unnecessary tension and disunity among party members in the state in a manner akin to bringing the party into disrepute.

“This decision, hard as it is, is designed to bring sanity back to our party.

“It would be like ignoring the elephant in the room if we ignore this macabre dance as Edo people have watched in utter amazement and disappointment how Aziegbemi has been roped and entangled by his actions and unfortunately too, his inactions in the management of the affairs of the party.

“We are a disciplined party and pride ourselves as organised and focused on service delivery to our teeming supporters and of course, Edo people.

“We urge our members and supporters to please remain calm as we embark on this self-cleansing exercise.’’

The party spokesperson said a committee set up to investigate the allegations against Mr Aziegbemi has been given one week to conclude the assignment, while the state Deputy Chairman of the party, Harrison Omagbon, would act as the chairman, pending the determination of the case.

The PDP chairman, in a letter he jointly signed with the party secretary in the state, Hillary Otsu, accused Mr Obaseki of marginalising the PDP in his political appointments so far and also making moves to sack the party structure in the state.

The duo said the letter was written on behalf of the “expanded State Working Committee of the party”.

Mr Obaseki had defected from his former party, the All Progressives Congress to the PDP where he contested and won the election for his second term.

“Edo people voted for PDP and Godwin Obaseki to deliver the dividends of democracy to them.

“If he wishes to appoint only his friends and former APC colleagues in his cabinet and sundry positions and leave out the legacy PDP members, so be it,” said Mr Aziegbemi in the letter which was sent to the national leadership of the PDP.