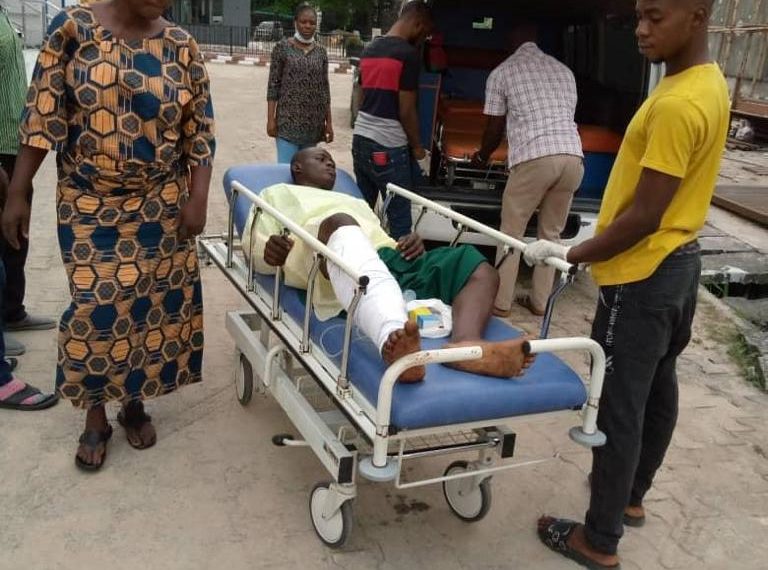 When he was being transferred

On October 20, 2020, Olalekan Falaye joined thousands of young Nigerians to peacefully protest against police brutality. From this action, Mr Falaye lost the ability to walk.

Olalekan Falaye, 23, used to actively move around before soldiers shot at protesters at the Lekki tollgate, Lagos State, on October 20, 2020.

Now, he cannot walk without a wheelchair. His right leg was amputated as a result of a gunshot injury he sustained that day.

Mr Falaye, who was protesting at the Lekki tollgate during the peaceful #EndSARS protest last year, said he was shot by soldiers.

Medical records and photos taken before and during his time at the hospital confirm the gunshot. We interviewed him, fact checked his medical records and verified his story, as part of #MySARSStory – our series of stories documenting brutality and seeking police reform. 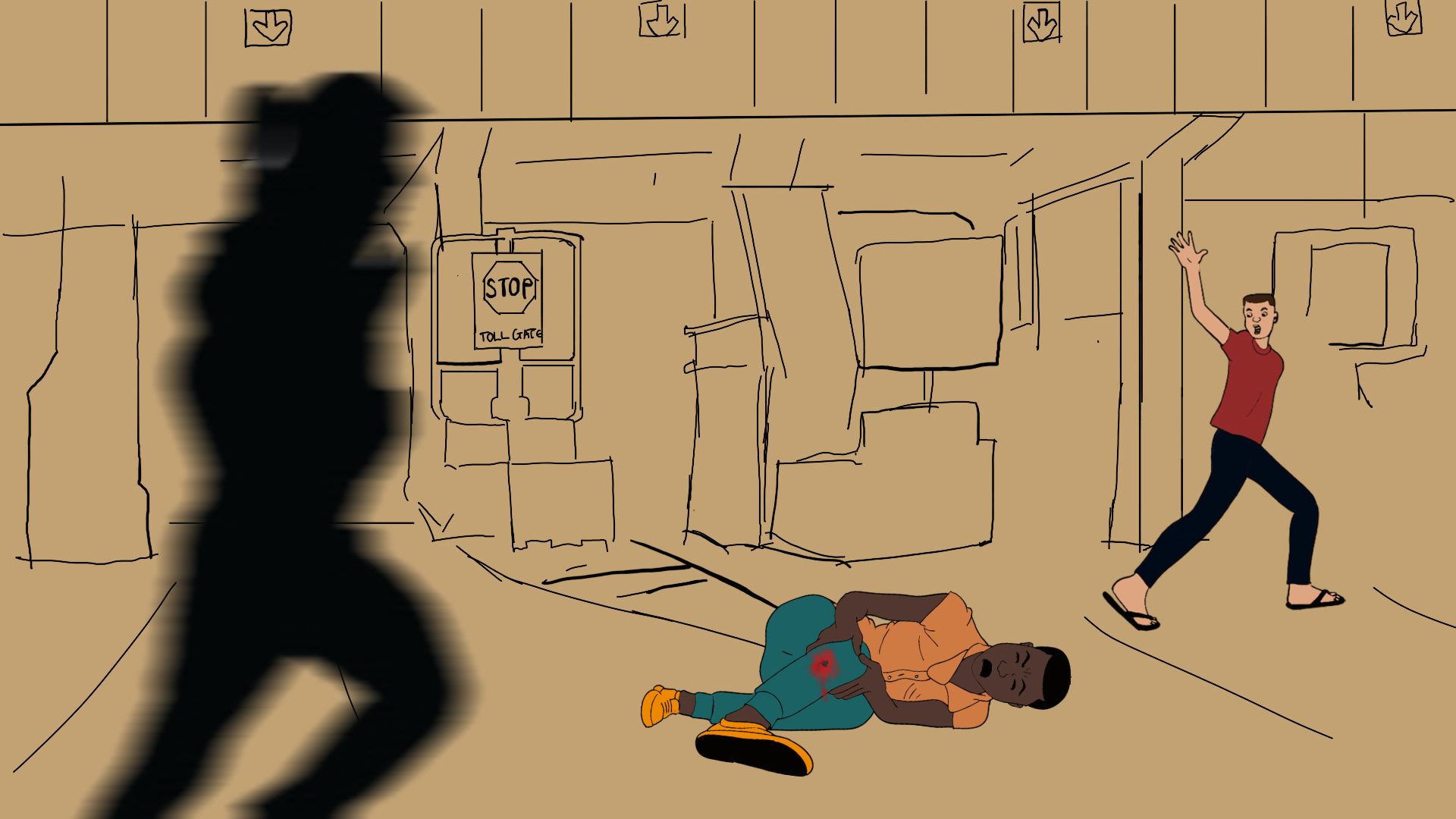 Mr Falaye’s revelation is yet another piece of evidence backing the allegation that soldiers shot live ammunition at protesters during the Lekki attack, a claim the Nigerian army continues to deny.

“On Tuesday, I decided to join the protests after I closed from work,” Mr Falaye explained. “It was about 7 p.m. when we were told the soldiers had arrived, that we should not run but sit down on the floor. The soldiers just started shooting up in the air.”

Mr Falaye’s account checked repeated verifications and even part of the military’s narrative.

The Commander of 81 Division of the Nigerian Army, Ahmed Ibrahim Taiwo, revealed while being cross-examined at the Lagos State Judicial panel that the soldiers deployed to Lekki went with live rounds, contrary to the initial stand that the soldiers only fired blanks. 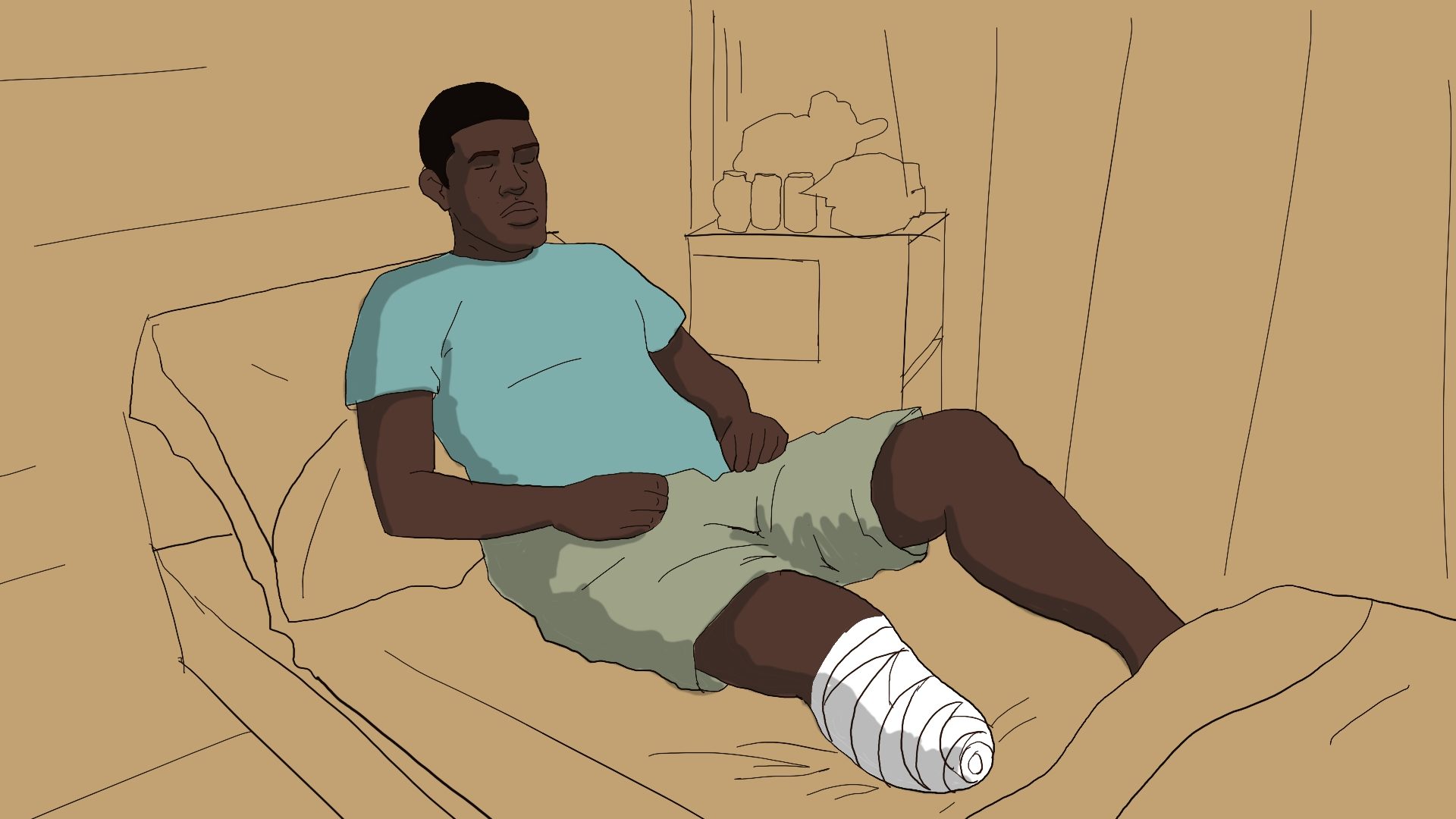 The Nigerian army continued to insist that its soldiers only shot in the air, but that only accounted for a few minutes after the soldiers arrived at the scene.

What followed hours later were heinous human rights violations and extrajudicial killings, according to Falaye’s account and investigations carried out by CNN and PREMIUM TIMES.

“It got to a point, the soldiers faced us (protesters) and started shooting at us. It was at that point that a bullet ‘met me in my leg’. It was a good Samaritan who helped me and carried me to Randville, saving my life,” Mr Falaye claimed.

His medical report from Randville Trauma Centre, where he received initial treatment, confirmed that he was indeed shot at Lekki Tollgate.

“He sustained this injury as a result of his involvement in the #EndSARS protest that occurred at Lekki Tollgate,” his medical report read. “The flesh on his leg was torn open by the bullet.”

The hospital recommended amputation, claiming, “no pulse was felt” on his leg. He was subsequently referred to the National Orthopedic Hospital in Igbobi, Lagos, where the procedure was carried out five days later.

Since Mr Falaye’s mother, Temitope, got the news about her son, she said she’s faced a great financial challenge to get him the necessary medical care. Her savings and capital for her food business took a hit. She sold noodles by the roadside and offered cleaning services.

“When I got to Igbobi, they said I should go and bring money for a bed. I opened a (patient’s) card, after which I was given a drug prescription. I spent fifty-something thousand (naira) the first day alone, and that only accounts for what I could calculate,” the dejected mother said, adding she was only able to afford some of the medical expenses because of help from her church members and friends.

The mother is grateful that Mr Falaye learnt a trade, but she is worried he might not be able to raise capital to start up a shop after coming out of apprenticeship.

“I need them (the government) to help us because even what to eat has now become so hard,” she said.

Days into the nationwide #EndSARS protests, hoodlums alleged to be sponsored by the government, attacked protesters in different states. At least two people were killed in Abuja following the attack.

Following this development, some state governors announced curfews. On the same day the curfew was announced in Lagos, October 20, 2020, the Nigerian army clamped down on protesters in Lekki.

Amnesty International alleges at least 12 people were killed during the attack. A popular Nigerian Disc Jockey, DJ Switch, said she counted 15 people who were killed, and their corpses taken away in military vans.

The Nigerian army initially denied its men were present at the tollgate, but after the state governor, Babajide Sanwo-Olu, said during an interview with CNN that soldiers were indeed deployed to the scene, the army changed its story.

Evidence has since emerged to show that people were killed or maimed during what has now been dubbed as the #LekkiMassacre.

Mr Falaye was one of those maimed during the attack.

Nigerian town, in darkness for decades, to finally have electricity

South-East Heading North-East: The Path To Apocalypse, By Ugoji Egbujo