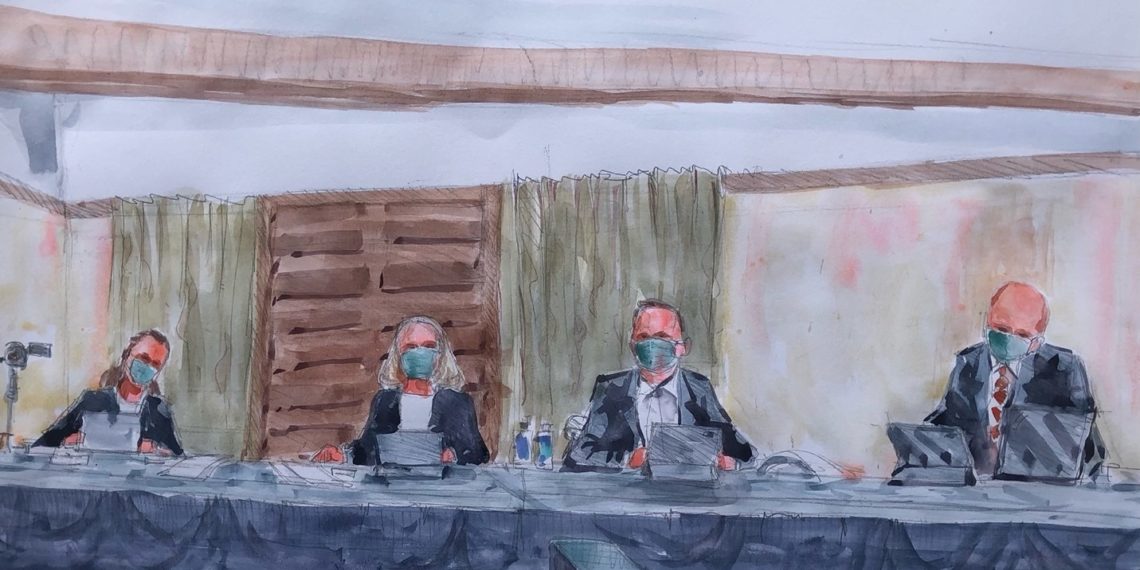 Court hears testimony that Massaquoi was not in Liberia with RUF

Massaquoi is being prosecuted in Finland for war crimes and crimes against humanity in Liberia.

A defence witness in the war crimes trial of Gibril Massaquoi told the Finnish court holding hearings here that he fought with the Revolutionary United Front in Lofa County in 2001 but Massaquoi was not with them.

The witness, codenamed “11” to protect him from intimidation, was a radio operator for RUF leader Foday Sankoh’s station called Secret Signal Broadcasting (SSB). He said he met Massaquoi in 1999 when they were all in the RUF together.

Like several witnesses in Liberia who were connected to RUF and the government forces of Charles Taylor fighting LURD forces in Lofa, during Liberia’s second war, this witness spoke about why the RUF forces were sent to Lofa.

“LURD (a rival Liberian faction) rebels intended to close our supply route, so our commander Issa Sesay sent our team led by ‘Colonel Eagle’, to clear the route in May 2001,” “11” told the court. “He said it was not good for us to be cut off, because we were getting our major supplies from Charles Taylor’s commander, Benjamin Yeatan and he was giving us food and ammunition supplies. Our supply route was passing through Foya, Kolahun and Voinjama in Liberia. But I did not see Massaquoi during that time in Liberia. Massaquoi left Liberia in 2000 before we got there in May 2001.”

“11” said his RUF forces stayed in Liberia from May to June in 2001 before the RUF disarmament in Sierra Leone. He said he then met Massaquoi in Sierra Leone 2002 at the party headquarters when RUF was running to be a political party. At that time Sankoh was in prison and Massaquoi was second in command.

“11” said in 2000 Massaquoi was appointed as head of the external delegation. His responsibility was to lead the peace delegation to Liberia to negotiate with former President Taylor for the release of RUF head, Foday Sankoh, who was arrested and was in jail until his death.

The crux of hearings in Sierra Leone will be whether Massaquoi could have escaped witness protection in Freetown where he was informing on Taylor and others to the Special Court for Sierra Leone long enough to go and fight for Taylor in Liberia at the same time.

Dozens of Liberian witnesses testified that Massaquoi committed atrocities in the Waterside area of Monrovia in 2001-2003. Experts say the only major fighting in Waterside happened in 2003 when then-president Charles Taylor was fending off the advancing forces of LURD.

If the Finnish could find that Massaquoi did escape witness protection to fight for Taylor in Liberia while also testifying against him that would raise serious questions about the Special Court’s processes. It was the Special Court that arranged Massaquoi’s resettlement in Finland and immunity from prosecution for crimes committed in Sierra Leone.

Massaquoi is being prosecuted in Finland for war crimes and crimes against humanity in Liberia. Massaquoi was relocated to Finland in 2005 but when Civitas Maxima, of Switzerland and Liberia-based Global Justice Research Project presented Finnish investigators in the city of Tampere, where he was living, with evidence of his war crimes in Liberia, they arrested him in March 2020 for his role in that war.

Massaquoi’s trial began on February 1 in Tampere. Rather than transport more than 80 witnesses set to testify to Finland in the midst of a pandemic, the Finnish court travelled to Finland and Sierra Leone.

In another attempt to confirm dates the court heard from an alleged former girlfriend of Massaquoi and mother of his child. The woman, codenamed “13” told the Finnish court that she met him in late 1999 and they started a relationship. She said their son was 20 years old but could only remember the year the child was born as “between 2001 and 2002”.

The woman said it was in 2001 that she realised she was pregnant for Massaquoi and told him via mobile phone that she was leaving the Gambia where she went to visit her parents, for Monrovia. She said Massaquoi sent her some money and told her to meet him in Monrovia because he was due there for peace talks.

She said she met Massaquoi at a house in Monrovia where he was living that had been given to RUF officials by the Liberian government at the time.

“After three months, I did not want to have my baby in Liberia, so I moved back Freetown and gave birth,” “13” told the court. “By then Massaquoi was already in Freetown and often came to see me and the child at my place in Tengbeh Town. But after some months in 2002, when he was isolated and nobody could see him for security reasons, I asked his brothers about him, and they said he was under witness protection for the Special Court in Sierra Leone. But he would normally give money (to) his friend Michael to bring me for the upkeep of his child twice a month.”

Meanwhile, the other witness for the day, codenamed “4”, said he was an officer of the Central Intelligence Unit in Sierra Leone and got to know Massaquoi in 1998. Called by the defence, the witness appeared to further the defence case that there was another person operating as “Angel Gabriel” in Liberia during the period of 2001 and 2003 and not Gibril Massaquoi.

“Massaquoi used to come and visit me at my office. We met many times in Freetown and we normally talked about peace and moving Freetown forward. I can’t remember, but I am sure I met Massaquoi in 2003 but I do not remember the last time I heard from him. I had no knowledge about him and RUF, he never told me about his business with Charles Taylor,” he said.

In a short interview with New Narratives, Massaquoi defence lawyer Paula Sallinen, now in Freetown with the Finnish court, said she cannot predict the ongoing trial of Gibril Massaquoi. But since her client Massaquoi has denied all alleged war crimes charges, she believes him.

“So looking at all of the statements so far, from all of the witness(es) in Liberia and Sierra Leone, everything is as expected,” Sallinen said. Massaquoi has not traveled with the court but is watching the proceedings through a videolink from his jail in Finland.

Sallinen and her colleague Kaarle Gunmerus were chosen by Massaquoi to represent them. In Finland, if an accused cannot afford to pay for their defence, as is Massaquoi’s case, the state pays. Sallinen said she expected that the final judgment of the Massaquoi trial in Finland will come in September.

She said she hopes this trial will serve as an eye opener.

“I hope Liberia can have her own war court that will be held and operated in Liberia to be able to prosecute alleged warlords,” Sallinen said.

The trial continues on Thursday.

This story was in collaboration with New Narratives as part of the West Africa Justice Reporting Project. Funding was provided by the Office of the United Nations High Commissioner for Human Rights. The funder had no say in the story’s content.

De-escalation ‘an absolute must’ in Israel-Palestine conflict – UN

De-escalation ‘an absolute must’ in Israel-Palestine conflict – UN