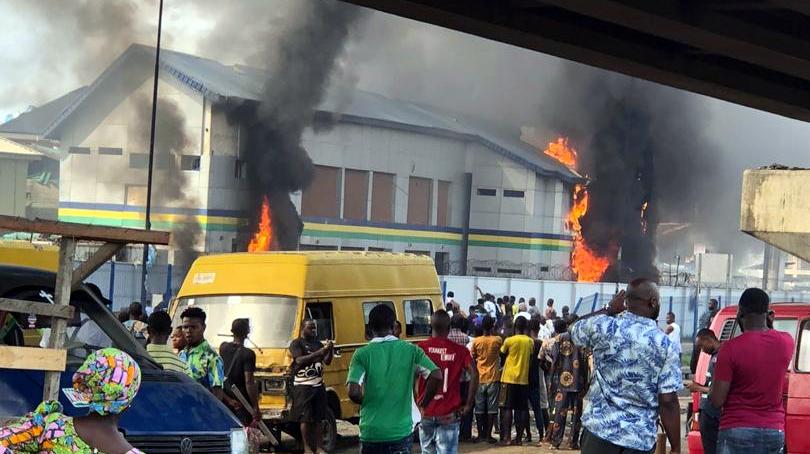 A police station burnt down.

Governor Udom Emmanuel announced a donation of N60 million to the families of the slain officers.

The police authorities in Akwa Ibom State said they have so far lost 21 officers due to gun attacks in the state.

The commissioner of police in the state, Amiengheme Andrew, disclosed this on Monday while briefing Governor Udom Emmanuel who visited the police headquarters in the state to condole with the families of the slain officers and the police over the loss.

Mr Andrew also informed the governor that the police in the state lost 11 vehicles and seven firearms in the various attacks.

Mr Emmanuel, who visited the police headquarters immediately after the State Executive Council meeting, announced a donation of N60 million to the families of the slain officers.

Besides meeting with the police commissioner in his office, Mr Emmanuel met with officers inside a hall where he thanked them for dedicating their lives to the security of lives and properties in the state.

Mr Andrew thanked the governor for the visit and the donation. He said the visit was a morale booster to police officers in the state, and promised that the command will continue to do its best to secure the state.

Hours before Governor Emmanuel’s visit to the police headquarters, there were unconfirmed reports of fresh disturbances by hoodlums in Essien Udim Local Government Area of the state.

A police officer was killed on Sunday in Essien Udim during an attack by hoodlums.

The attack occurred simultaneously with a similar attack in another area – Abak Local Government Area – in the state.

The police spokesperson in the state, Odiko MacDon, identified the slain officer as Obadia Eli, who was attached to MOPOL 57 Ukana.

The officer was on his way to his beat when he was accosted and killed by the hoodlums, Mr MacDon, a superintendent of police, said in a statement on Monday.

Besides the Boko Haram insurgency in the North-east, the perennial conflicts between farmers and herders, and the abduction for ransom in various parts of Nigeria, there has been a spate of deadly attacks on security agencies in the South-east and South-south geopolitical zones, which has compounded the security challenges in the two regions.