The girl, Aliah Oluokun, spent several days in the University College Hospital, Ibadan, with bodily injuries, including on her private part.

An Oyo woman, Suliyat Taofeek, has been charged to court after she and her family were arrested by the police over a horrific torture of a 13-year old girl.

The girl, Aliah Oluokun, spent several days in the University College Hospital, Ibadan, with bodily injuries, including on her private part, PREMIUM TIMES had earlier reported.

After efforts to help Mrs Taofeek stave off justice by some local ‘powerholders’ in Oyo failed, PREMIUM TIMES understands, the police charged her to the Chief Magistrate Court last Thursday. She was granted bail.

The police said other suspects with whom Mrs Taofeek conspired to torture Aliah were at large.

According to the court filings seen by PREMIUM TIMES, she is charged with assaulting Aliah, “beating her with sticks and pressing her lap with a hot knife and causing her bodily harm in Oyo Town on February 22, all contrary to the criminal code of Oyo State”.

Mrs Taofeek and her family had accused Aliah of stealing money at their shop, located at the Borobore area of Oyo Town, on February 22. They were then reported to have used extreme torture to force her to confess. 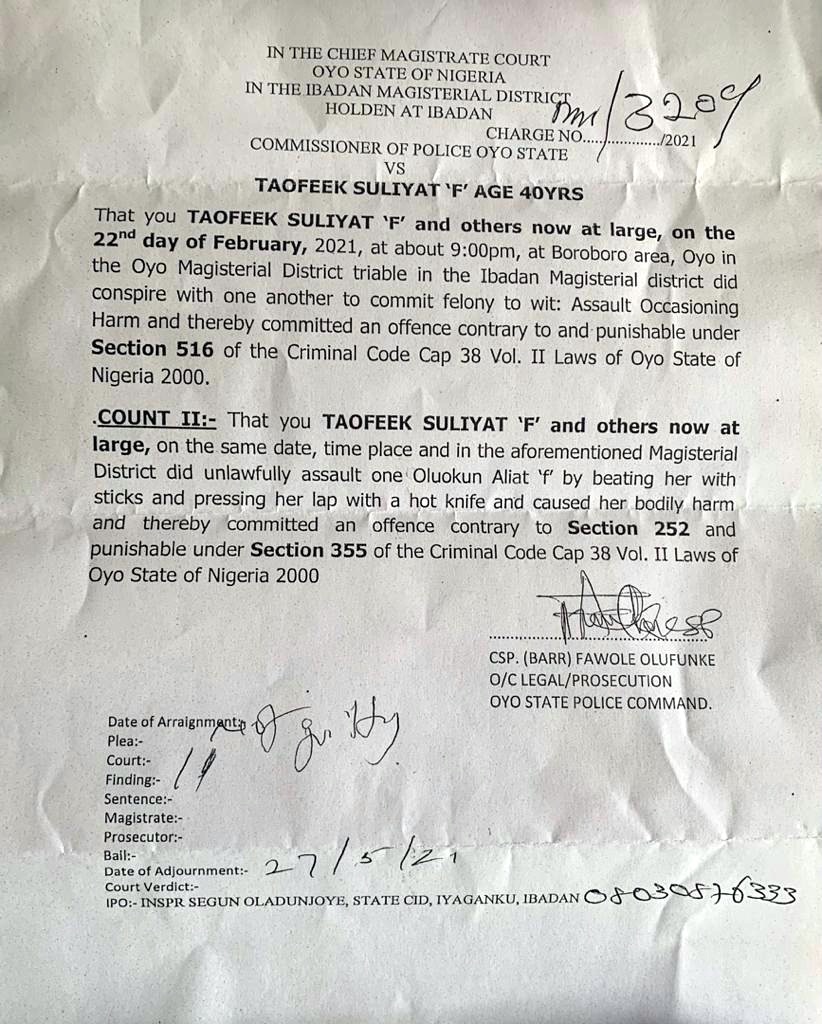 Photographs reviewed by PREMIUM TIMES, complimenting disclosures by family and security sources, suggest a sharp object was used to inflict injuries on Aliah’s thighs and hands, pepper was applied to her private part, and a plier was used to cause her wounds on her toes.

Aliah’s family had been responsible for her medical bills at a local hospital in Oyo before ex-Oyo Central senator, Monsurat Sunmonu, asked that she be taken to UCH in Ibadan for better care and settled her bills there.

OGF’s chairman, Olorunpoto Rahaman, “We are baffled though that only one person was charged for the assault against the girl. Efforts are in top gear to spread the dragnet to other assaulters including the husband of the current accused and two of their grown up children. They were all arrested by the Police before now and they were released on bail. They now claim the released fellows are at large.”

Mr Rahaman also condemned the police for making Aliah sleep in a cell before she was arraigned and granted bail. “They could have released her to us and made us commit to presenting her in court,” he said.

The Technology Revolution’s Continuing Threat To the Workplace, By Uddin Ifeanyi