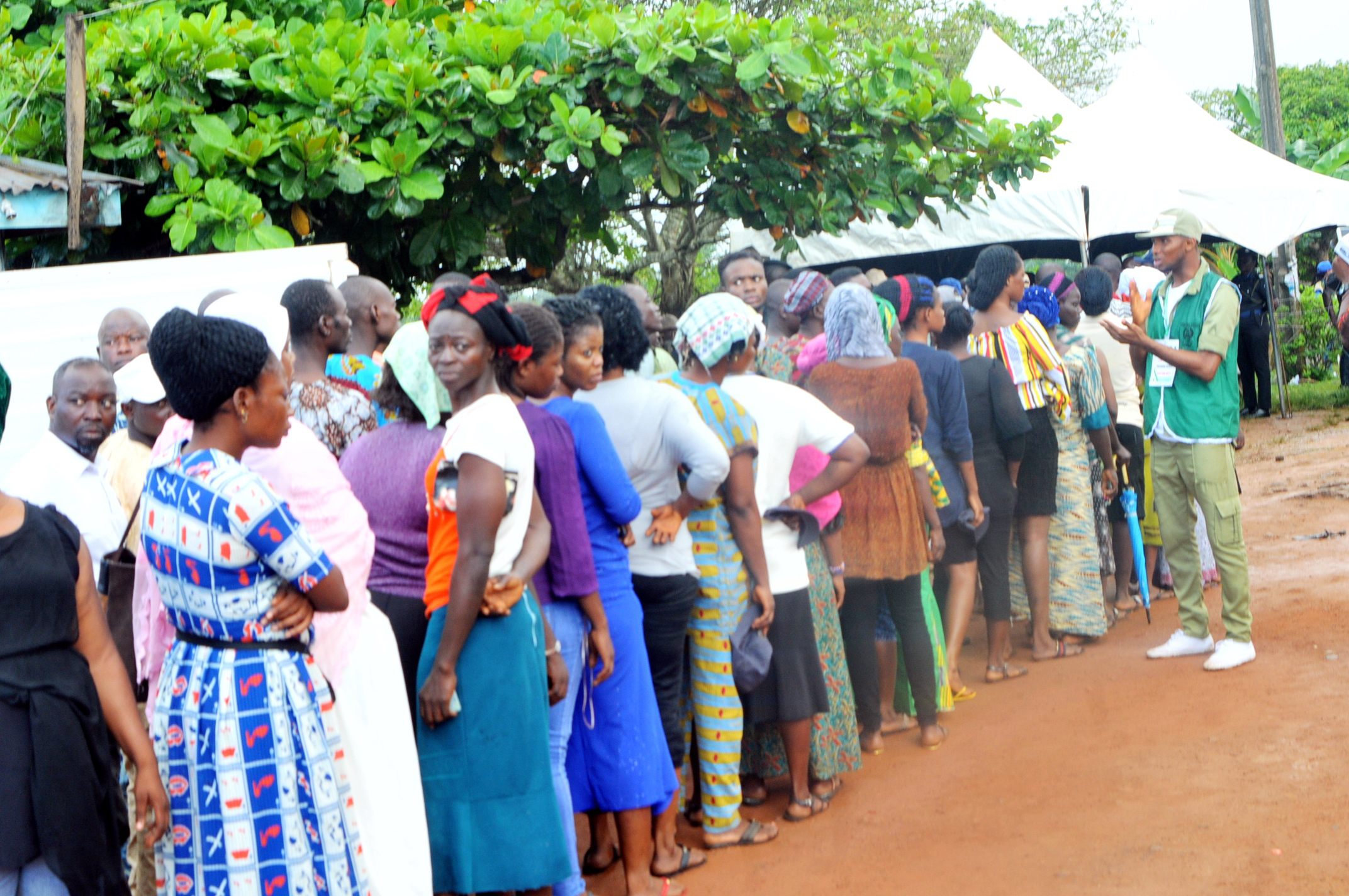 Voters queuing to cast their votes

INEC chairperson says the Continuous Voters Registration (CVR) will run until the third quarter of 2022.

The Independent National Electoral Commission (INEC), on Thursday, announced its plan to recommence Continuous Voter Registration exercise (CVR) on June 28 across the country.

The commission’s chairperson, Mahmood Yakubu, stated this while addressing journalists in Abuja.

The exercise, as stipulated in Section 10 of Nigeria’s Constitution, should be on continuous basis but that has not been constant due to “exigencies of resources.”

Mr Yakubu said the exercise could not recommence largely due to the impact of COVID-19.

Recalling the attempts made by the commission to ensure continuous voter registeration, the INEC chairperson said the CVR took place continuously from April 2017 till late August 2018 when it was temporarily suspended in preparation for the 2019 General Election.

“The CVR could not recommence in 2020 due largely to the COVID-19 pandemic. In line with the general advice by health officials regarding events involving large groups of people, we considered it inauspicious to restart the CVR at the height of the pandemic.

“The commission issued a detailed policy on conducting elections in the context of the COVID-19 pandemic, which focused mainly on proper elections, since these elections must be held to prevent any constitutional crisis linked to the end of tenure. Such elections took place in Edo and Ondo states late last year.

“Our thinking at the time was that at the turn of the new year, we would have completed all outstanding off-season governorship elections and that the pandemic would have eased. We also needed time to put in place new systems that would facilitate safer registration of voters, should the pandemic persist.”

The INEC boss said the exercise was initially scheduled to recommence within the first quarter of 2021.

Mr Yakubu on Thursday said the commission was set to commence the exercise on June 28 ahead of the forthcoming 2012 Anambra Governorship Election.

He said the exercise would run for over a year until the third quarter of 2022 with emphasis on the Anambra State as a result of its November 6 governorship election.

“Effective from Monday 28th June 2021, the CVR exercise will commence nationwide and carried out continuously for over a year until the third quarter of 2022.

“However, emphasis will initially be on Anambra State where more centres will be established in view of the Governorship election already scheduled for Saturday 6th November 2021.

“In order to complete preparations for the governorship election, the CVR exercise in the state will be temporarily suspended in August 2021. This will enable the commission to clean up the data for the state and print the PVCs for registrants. As time goes on, the commission will provide more details on the CVR exercise, particularly the innovations that will ensure a safe and stress-free experience for registrants. In doing so, we will fully consult stakeholders. In fact, the first in the series of these consultations will take place after the Easter break,” he said.

The new device is known as the INEC Voter Enrolment Device (IVED) and is based on an Android tablet.