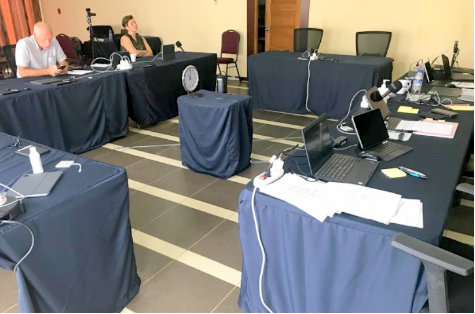 Inside the Monrovia hearing room of the war crimes trial of Gibril Massaquoi, Thierry Cruvellier/Justiceinfo.org

“We, the Liberian soldiers, used to call him the ‘Black Friday Master’, because he did most of his killing on Fridays.”

A witness told the Finnish court hearing the war crimes trial of Gibril Massaquoi on Friday, that the former leader of the Sierra Leonean rebel group the Revolutionary United Front gave then Liberian President Charles Taylor gold and diamonds in exchange for arms and ammunitions to fuel Liberia’s civil war.

Taylor is serving a 50-year prison sentence in a United Kingdom prison for aiding and abetting war crimes and crimes against humanity in Sierra Leone. He has never faced charges for his role in Liberia’s conflicts.

Taylor’s selling of diamonds for the RUF was key in his conviction by the UN-backed Special Court for Sierra Leone. The trade became widely known as “blood diamonds” for the thousands of civilians who were killed or maimed in the RUF’s pursuit of the diamonds.

On Friday a prosecution witness, who said he was once a special bodyguard to Commander Stanley, one of Taylor’s generals, said he knew “Angel Gabriel”, Massaquoi’s alias, personally and used to see him when he delivered packages to his boss.

“Chief Massaquoi”, the witness told the four-judge panel, “always brought packages to my boss man to carry to Taylor. I never knew what was in those packages until one day ‘Angel Gabriel’ killed two old men who he accused of tampering with a package. And it is when we got to know the packages contained gold and diamonds. And in return, Taylor would send us to deliver guns and ammunition to ‘General Mosquito’ at times, but most often we would give the ammunition to ‘Angel Gabriel’, because he was the spokesman for RUF.”

The witness was relaxed and calm as he explained for the court the mechanics of the trade.

He said that whenever Taylor got a package, a pickup would leave the mansion yard and go to a yellow building in a fence near Kalano Gas station and they would load it with arms and ammunitions and cover it with tarpaulin. The truck would leave for Lofa by 1 a.m.

The witness said he had witnessed many Massaquoi kill many people in Combat camp and Lofa County. Massaquoi’s apparent preference for killing on one day of the week earned him a nickname among the troops.

“We, the Liberian soldiers, used to call him the ‘Black Friday Master’, because he did most of his killing on Fridays.”4

The witness corroborated the testimony of earlier witnesses about a massacre in which scores of people were locked in a building and burned alive. He confirmed it was done on a Friday. “I know it was Friday, because I saw people praying in the mosque on that day,” he said, referring to the Muslim practice of Friday prayer.

The witness told the court that on the day of that massacre, he saw “Angel Gabriel” and other rebels, “Jonny Paul”, Sam Burkarie, also known as “General Mosquito” and “Sierra Leonean Devil” burn the people in the building. He said “Angel Gabriel” had decided to burn them because he had heard that they were protected by “juju” or magic, and could not be killed by gunfire. The witness said he and his boss General Stanley were in the nearby village of Masambolahun when they heard of Massaquoi’s plans to burn the people alive in Karmatahun. They rushed to stop Massaquoi but it was too late.

“By the time we arrived there, it was already late. They had already put gas on the building and set it on fire. My Boss Stanley was very angry with ‘Angel Gabriel’ and asked why he was killing his people. Massaquoi told him they were traitors.”

Massaquoi’s trial is being held in the District Court of Tampere in Finland where he was relocated in exchange for his testimony against Charles Taylor and others in the war crimes prosecutions there. 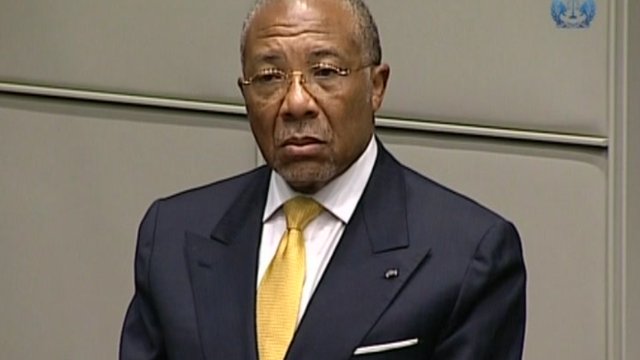 The hearing is being held in a secret location in Monrovia to allow the court to hear directly from more than 80 Liberian witnesses. The court has ordered journalists to conceal the witness’ identities for fear of intimidation or retribution.

Earlier in the day, a witness said he who had been an officer of President Taylor’s “Anti Terrorist Unit”, (ATU) told the court that after his training at Gbatalah Base, he was sent to Lofa in late 1999 when RUF troops from Sierra Leone came to train with them. Burkarie had assigned Gibril Massaquoi to Kolahun in Lofa County.

The witness told the court that “General Mosquito”, was killed by Benjamin Yeaten, a top Taylor commander known during the war as “50”. Mosquito’s body was flown to Monrovia onboard a helicopter to show to President Taylor so he knew it was really Burkarie’s body.

“Yeaten put Burkarie in a jeep and carried him on the high and those who killed Burkarie, shot him with gun but he could not die, so they beat him with sticks until he died,” he said.

The witness had been calm until cross-examination when he became jittery and gave conflicting accounts. Called by the defence team, the witness was supposed to help Massaquoi establish his defence that he was not in Liberia when the crimes were committed. However, the witness’s continual contradictions undermined his testimony.

In one example, the witness had told police investigators that he and Massaquoi were on the scene when General Mosquito was killed. But he changed his story in court when said Massaquoi was not there. Massaquoi was “on the run”, he said, believing he too was to be killed on Taylor’s orders as Burkarie had been.

In another example, the witness told the court Burkarie had been murdered because he and his men were killing and terrorising the Liberian people. In the earlier police investigation interview, played for the court, he said Taylor told “50” to kill Burkarie because he could not afford for the UN to get to him first and reveal Taylor’s secrets regarding Sierra Leone.

Asked by the prosecution lawyers why he told the police a different story, the witness said, “As a security man I cannot just tell anybody everything I know because I do not know who is who. So I did not tell the court that President Taylor told Yeaten to kill Burkarie.”

The witness confirmed that Taylor had directed Massaquoi to be killed. But Massaquoi escaped.

A third witness, also a former ATU officer called by the defence, said he knew Burkarie when he was sent to Ivory Coast to get ammunition. He said Burkarie received seven pickup trucks filled with ammunition and was told by President Taylor to pass through Harper, Maryland County to bring the arms to Monrovia.

The witness contradicted an earlier witness’s claim as to how “General Mosquito” was killed.

He claimed Yeaten called Burkarie for a meeting at the Vice President’s residence in Nimba County. When Burkarie arrived, he said, Burkarie refused an order to go to Ivory Coast saying the French army had taken over.

“They all knew it was a trap to kill Burkarie when they called him to that meeting. So they took him to meet some new men that they said would be under his command. But Burkarie did not know the group was there to execute him. The men started beating Burkarie with sticks, and then Yeaten ordered them to shoot him instead. When he was killed, Yeaten instructed his men to take the body to the Ivory Coast and Liberian border. I was in Yorpea New town when they brought his body and I saw his body.”

The trial continues on Monday.