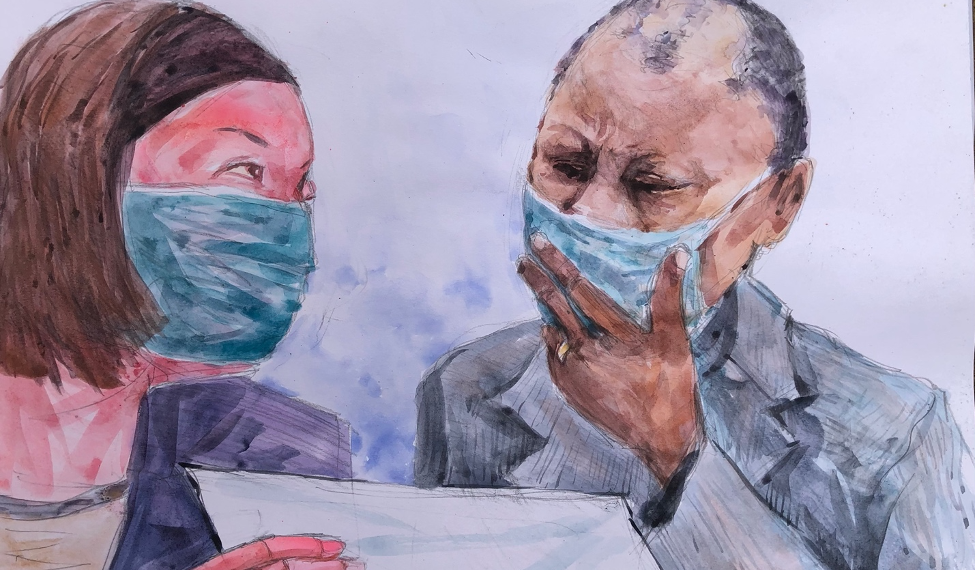 The witness repeats claims by three witnesses who testified that in 2001 Massaquoi had ordered seven women burned alive.

The first witness, a 45-year old man, from the Lofa County village of Karmatahun, said “Angel Gabriel” as Massaquoi during the war, ordered his men to burn about 25 ‘small children’ alive in a cook shop and burned others in a nearby house.

“I was standing right there and saw it with my two eyes, when ‘Angel Gabriel’ ordered his men to lock the children inside the cook shop near the house and burn them alive. Just before his soldiers could burn the people in the house, I heard him say, ‘I am Angel Gabriel, and I am next to God, burn all the people,’. He told his men to stand around the house so that nobody could escape the fire,” the witness said.

The witness repeated stories told by three witnesses on Monday who testified that in 2001 Massaquoi had ordered seven women burned alive.

“I heard the women crying that night because they were raping and killing the women and the next morning we saw the seven naked women dead,” he said. “Some were killed with knives because I saw the knife marks on them, and some of the women’s bones were broken from the sticks they beat them with until they died. I was among the men who buried those women a few days after their death, because everybody in the town was scared to remove the bodies right after they were killed, so after some days we went to bury them because they were already getting rotten.”

The witness said he knew the events took place in 2001.

“I did not go to school, so I do not know book, but just how people used to talk about the 1990 war, this was the same way people in Karmatahun used to talk about 2001 war and I used to hear it,” he told the four-judge panel from Tampere in the European country of Finland, which is conducting the trial.

Massaquoi, is being prosecuted in Finland for war crimes and crimes against humanity in Liberia.

Massaquoi was a lieutenant-colonel of the RUF and an assistant to the rebel group’s founder, Foday Sankoh, during the Sierra Leonean Civil War.

Epertsx said he was instrumental in the convictions of several rebel leaders including former Liberian president, Charles Taylor, with whom he was close during the civil conflicts in both countries.

Finland granted Massaquoi residency for his role in the Sierra Leone Special Court. But when Civitas Maxima, of Switzerland and Liberia-based Global Justice Research Project presented Finnish investigators with evidence of Massaquoi’s war crimes in Liberia, they arrested him in March 2020 for his role in that war.

Massaquoi’s trial began on February 1 in the city of Tampere, where he had been living.

Rather than transport more than 50 witnesses set to testify to Finland in the midst of a pandemic, the Finnish court traveled to the witnesses. The trial is expected to run for six weeks in Liberia and then move to Sierra Leone before returning to Finland in May.

The second witness on Tuesday, who was a 10-year-old child at the time of the killings, echoed the first witness’s testimony about the burning of the civilians in the house and the killing and raping of the seven women.

But he added that he had seen Massaquoi order the eating of a victim’s heart.

“I saw a Sierra Leonean man who called himself ‘Angel Gabriel’ and he ordered his men to kill a man and take out his heart and said he was going to eat it,” he said.

Massaquoi’s defence team scored a win when lawyer Kaarle Gunmerus seized on the testimony during cross-examination saying it was different from a prior statement the witness made to Finnish police about Massaquoi’s alleged eating of the heart of a LURD soldier.

During his testimony in open court on Tuesday, the witness denied making the statement, prompting Gunmerus to play an audio recording of his statement to the police.

The witness claimed the voice on the recording was not his but his brother’s. Gunmerus then asked for a video of the interview to be played to prove it was indeed the witness making a different statement.

When the video was played, this time, he admitted that he was the one on the video.

He then said the reason he said it was a LURD soldier, because whenever the government forces captured a person, be it civilian or soldier, they would call that person a LURD soldier.

A final witness for the day testified behind closed doors without journalists present. It is accepted practice in Finland to allow rape victims to testify without outside observers.

The trial continues on Friday.

‘I won’t go for third term through surrogate’ – Governor Emmanuel