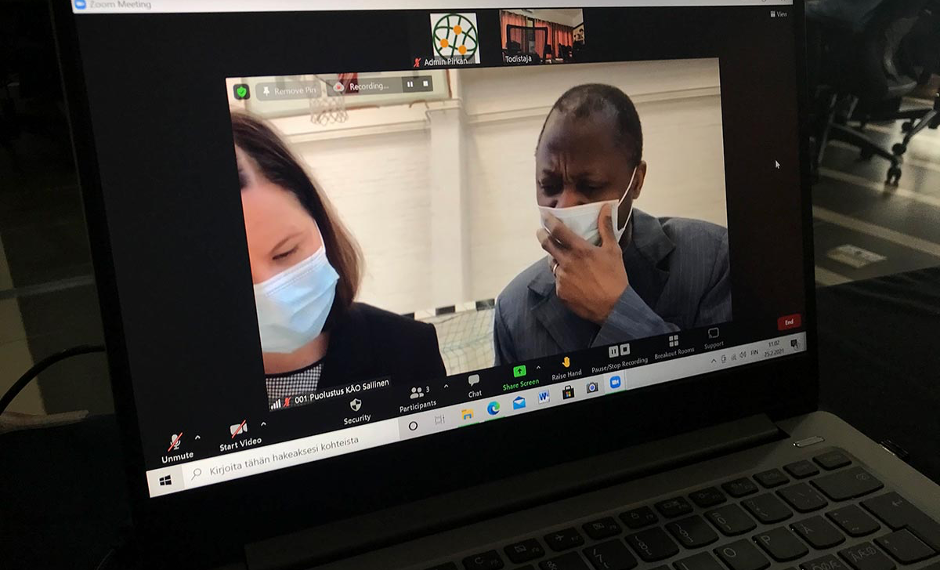 Gibril Massaquoi and his lawyer, seen by video link from a prison in Finland. Thierry Cruvellier / JusticeInfo.net

"One of the rebels pushed an elderly man who escaped from the flames and begged them for mercy back into the burning house and then sealed the door..."

A witness in the ongoing war crimes trial of Gibril Massaquoi in Monrovia has accused the ex-Sierra Leonean rebel commander of burning 100 civilians alive in Kolahun District, Lofa County in 2001.

The man, the second of three persecution witnesses on Monday told Finnish judges on Monday that Massaquoi ordered the victims, including women and children, to crowd into a house in Karmatahhun and then ordered rebels of the Revolutionary United Front (RUF) to pour it with gasoline and then set it ablaze.

“The great Angel Gabriel said to his men, ‘I told you people not to fire these people with gun, I told you to put them inside the house and burn them,’” the man, the chief for the town at the time, told the court of Massaquoi went by the alias “Angel Gabriel.”  “I was standing right there when it happened. [People were] crying from inside when the house was burning.”

The witness said Massaquoi’s men killed an elderly man who had managed to escape the fire and begged for mercy.

One of the rebels pushed an elderly man who escaped from the flames and begged them for mercy back into the burning house and then sealed the door, according to the witness.

“All kinds of killing went on in that place that when we returned we saw 27 dead bodies that they tied each person hands with electric wire,” he said. “And it was one of Angel Gabriel’s generals who used to tied people with electric wire and kill them.”

He narrated that after the war, an nongovernmental organisation, whose name he said he could not remember, built a memorial where he and other townspeople buried the bones.

Massaquoi, 51, is currently on trial in Finland for committing and inciting the murders of civilians and enemy fighters, rape and other human rights violations during the second Liberian civil war in the northern part of Liberia bordering Sierra Leone.

The former high-ranking commander of the RUF denies all the allegations, saying he was not in Liberia at the time the events occurred.

Massaquoi, a Sierra Leonean national, has lived in Finland since 2008 where he was relocated in exchange for devastating testimony that he gave to the Special Court for Sierra Leone.

Experts say Massaquoi’s testimony was instrumental in the conviction of former Liberian President Charles Taylor and other actors of the Sierra Leonean Civil War.

The Finnish Court moved to Liberia to hear the testimonies of more than 50 witnesses. The court will also hear testimonies in Sierra Leone.

The first prosecution witness told the court that he saw Massaquoi order his men to kill seven women also in 2001. He told the judges they were stripped, tied, tortured and killed. He said Massaquoi told the men to take the women behind a hut and “do what you want to do with them.”

“The next morning, I saw that the seven women were naked and dead,” said the 29-year-old man who was nine at the time. “Some of them were killed with knife while others were beaten until they die(d). I do not know their ages but they were mature.”

He said he also witnessed the incident where Massaquoi allegedly ordered people burned alive, and he fled the town shortly after killing of the women. After the war, he said he saw that the town had been torched.

The third witness provided similar details as the first and second witnesses. He said he witnessed the alleged murder of the women and the burning alive of the townspeople. He said he narrowly managed to escape.

“I was there when he ordered the people to be burned, because I was among those that were to be burn(ed) that day,” the third witness said. “I was rescued by Angel Gabriel woman called Monjamah, a Gbandi woman, who took me from among the people they were going to burn because I used to help her wash dishes and do some other work around the house.”

He told the court Massaquoi killed the woman a few days after but said he did not know why. He said he fled the town after that.

The trial continues on Tuesday.