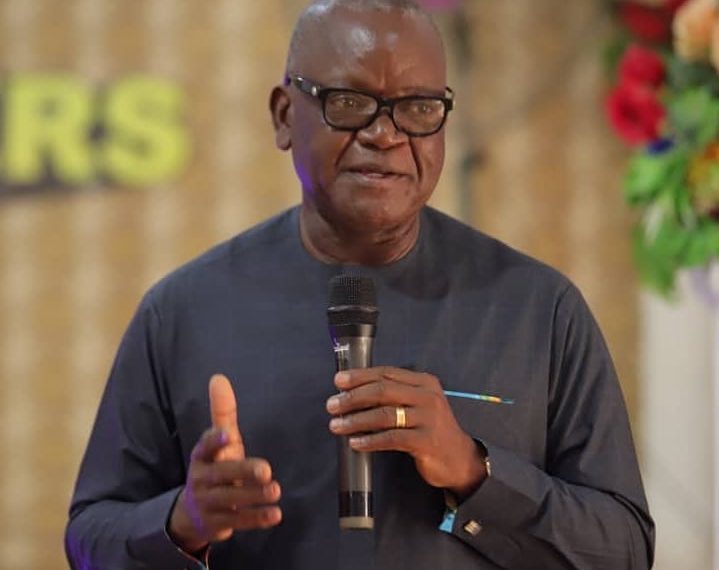 Mr Ortom was attacked by some unknown gunmen last Saturday while on inspection of his farm along Makurdi-Gboko road.

President Muhammadu Buhari on Tuesday in Abuja met behind closed doors with Governor Samuel Ortom of Benue State, who escaped attack by gunmen while on inspection of his farm.

Mr Ortom was attacked by some unknown gunmen last Saturday while on inspection of his farm along Makurdi-Gboko road.

While reacting to the incident on Sunday, Mr Buhari welcomed the dispatch of a high level team of crack investigators to Benue from the police headquarters in Abuja, urging the officers to uncover who, or whatsoever, was behind the attacks and bring them to justice.

He also expressed his sympathy and that of the federal government to Mr Ortom and Benue indigenes.

Mr Buhari, however, maintained that the unfortunate incident must not be politicised, reiterating that “an attack on one Nigerian is an attack on all Nigerians.”

Speaking to State House correspondents at the end of the meeting, Mr Ortom, stressed the need for all Nigerians to unite against crime and criminals terrorizing innocent citizens across the country.

He added that all Nigerians must forget about their political or ethnic differences and join hands to address the nation’s security challenges.

“I am aware that the security challenges in our country today are not about the president or we governors, they are about every citizen of this country so we must work together to surmount this.

“I also want Nigerians to know, especially those who are responsible for making inflammatory statements, that we are sitting on a keg of gunpowder and everybody is not in doubt in Nigeria today about the security situation. Without security there can be no meaningful progress and so it is important to put heads together.

“Let’s do the things that are lawful, protect the provisions of the constitution of the Federal Republic of Nigeria so that everybody will be secured. Let there be equity, fairness and justice. That is what I stand for,’’ he said.

Mr Ortom revealed that he used the opportunity of the meeting to make some recommendations to the president on how to ameliorate the situation.

The governor dismissed the allegation that he was attacked by aggrieved villagers over land acquisition matter, saying already a group had claimed responsibility for the assassination attempt.

The governor, who also spoke on Benue’s controversial anti-grazing law, said the law was not targeted at any ethnic group as being insinuated.

“We cannot continue in this manner. Democracy is anchored on the rule of law (and) that is why for some of us…., You see that I have not done anything illegal including the prohibition of open grazing, which my people told me to present to the House of Assembly and eventually it was signed into law.

“That law is not targeted against any ethnic group or individual but it is meant to regulate the activities of herdsmen and farmers and I think we have very good stories to talk about this.

“Today in Benue, those who trespass against this law, who are herders, are arrested, their cattle impounded and they are prosecuted.

“Those who rustle cattle from herdsmen, we also go after them so nobody is spared; even the people in Benue, Idoma, Tiv and other ethnic groups have also been prosecuted when they contravene the provisions of the law,” he said.