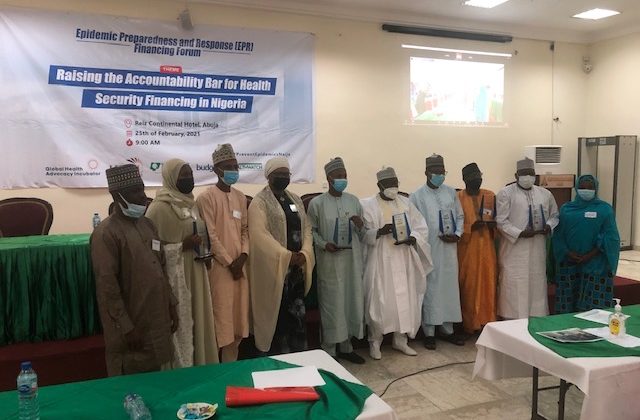 Health security: why Nigeria should prepare ahead of outbreak of infectious diseases

Health Security: Why Nigeria should invest, prepare ahead of disease outbreaks

Two years before the COVID-19 arrived in Nigeria and four years after the Ebola outbreak, Nigerian authorities began developing the NAPHS.

The COVID-19 pandemic took the world by surprise, revealing a global failure to invest in pandemic preparedness and thus teaching the global health community a lot of health security lessons.

While Nigeria, like most African countries, has not suffered from the worst effect of the pandemic, unlike its European and American counterparts, the Nigerian government has made some blunders and faced some challenges in managing the virus.

PREMIUM TIMES highlighted five of those challenges in an earlier  published report.

This has prompted calls for national leaders and actors to urgently consider strategies to rebuild resilience to such crises, especially by raising the bar for health security financing and accountability mechanisms for coordinated, well-planned responses.

Nigeria is particularly a hotbed of infectious diseases. The country’s tropical climate, population density, socioeconomic realities and high cross-border movement provide a conducive environment for such diseases to thrive.

In view of these ever-present threats, the Legislative Initiative for Sustainable Development (LISDEL) recently hosted a one-day multi-sectoral forum on Epidemic Preparedness and Response (EPR) Financing.

With the theme: ‘Raising the accountability bar for health security financing in Nigeria,’ the workshop was part of LISDEL’s Prevent Epidemics (PE) project; funded by Global Health Advocacy Incubator (GHAI) with the aim of boosting domestic spending on EPR.

Held in Abuja, the highlights of the event include two panel sessions: raising the accountability bar for public, private sector and donor investment in EPR; and improving Investment in EPR.

According to the organisers, some key objectives of the programme are to deepen the knowledge of key stakeholders on National Action Plan on Health Security (NAPHS) in Nigeria; and to engender an enabling environment for health security policy and financing in Nigeria through effective stakeholder engagement.

Two years before the COVID-19 arrived in Nigeria and four years after the Ebola outbreak, Nigerian authorities began developing a NAPHS with the signing of the International Health Regulations (IHR).

NAPHS is a comprehensive multi-sectoral document that sets out a strategy for strengthening health security of the country. Developed by the Nigeria Centre for Disease Control (NCDC) in collaboration with other relevant government agencies, NAPHS is a five-year strategic plan to be executed from 2018 to 2022.

During the launch of the NAHPS action plan in December 2018, the NCDC director, Chikwe Ihekweazu, stated that Nigeria needs to mobilise N134 billion over the next five years to enhance national health security in line with global standard.

While funds have been raised for tackling recurrent infectious diseases such as yellow fever and Lassa fever, there was no basket of fund for an unprepared situation such as COVID-19.

Some of the key issues raised and action plans activated during the LISDEL workshop were centred on raising the N134billion required for implementing the NAHPS.

Panellists and attendees proffered solutions on how legislations can be channelled towards increasing investment in health security with the private sector complimenting government’s effort.

Gafar Alawode, the programme director of the PE Project, in his opening remark, said the COVID-19 pandemic had shown that building a strong health security system should be prioritised as epidemics could break out unexpectedly.

He noted that an improved budgetary allocation and sustained preparedness response to epidemics would result in a drastic reduction in mortality during epidemic outbreaks.

“We must strengthen our health system by putting more money into the budget”, said Mohammed Usman, a former lawmaker and panellist at the event.

Raising accountability and transparency in the use of funds for health security was the topic for the second panel during the workshop with key stakeholders sharing experiences and lessons learnt from the COVID-19 response.

Apart from the local and international support Nigeria received for the fight against COVID-19, one response many Nigerians paid attention to was the philanthropic donations by big companies, organisations and individual Nigerians.

As of May 2020, about N36.3 billion had been raised. Meanwhile, details of how the funds were spent have remained sketchy.

The Accountant-General of the Federation, Ahmed Idris, last September, stated that over N30 billion, representing 84 per cent of the N36.3 billon, was expended between April 1, 2020, and July 31, 2020, leaving the balance of N5.9 billion.

Responding to a Freedom of Information (FOI) request dated August 10, 2020, and sent to him by Socio-Economic Rights and Accountability Project (SERAP) and Connected Development (CODE), the AGF said the PTF spent N22 billion, and 36 states spent N7 billion to support their COVID-19 initiatives.

He, however, did not disclose significant details and or give a breakdown of the number of Nigerians who directly or indirectly have benefited from the spending as well as details on plans to spend the balance of N5.9 billion.

Reports of lopsided distribution of palliatives based on political and sectional prejudices were further exposed in the aftermath of the #ENDSARS protests in October 2020, when warehouses filled with palliative were discovered and raided by hungry Nigerians.

There has been general mistrust by many Nigerians due to the opaque handling of the COVID-19 funds by the government and this is not a good example for advocacies towards health security, according to Mr Usman.

“A lot of money has been pumped into the system but the reality is that Nigerians are not seeing the impact which is why we are still having grim health indices,” he noted.

One of the key outcomes of the workshop include transparency on specific activities that allocated funds will be used for from the onset; involving the community in budget public hearing to get their inputs; and result sharing to build confidence.

Role of the media

Organisers of the event recognised the media as a key stakeholder in raising the accountability for EPR financing.

Brave, critical, and balanced reporting on the use of funds for EPR will generate conversations capable of putting the government under pressure to improve transparency and funding, Mr Alowode noted in his closing remark.

He, however, noted that investigative journalism is not only about negative reports about the government.

One of the major highlights of the event was a standing ovation given to the Kano State government for earmarking N300 million for health security.

Speaking to journalists during tea break, Mr Alawode said the creation of N300 million budget line by the Kano State Government was good example for the way forward in terms of health security and EPR financing.

“We are not going to relent until the funds are fully released and actively utilized. We are the one following trends and I believe members of the media have a role to play in terms of follow up and ensuring transparency,” he said.

Some Nigerians who have played major roles in advancing health security were awarded at the event.

One of them was Aminu Tsanyaura, Kano State health commissioner.

Mr Tsanyaura expressed delight in receiving the award and noted that Kano State will continue to put the right mechanisms in place to drive health security.

Early Nigerian Leaders: They Don’t Make them Like that Anymore!, By Wole Olaoye