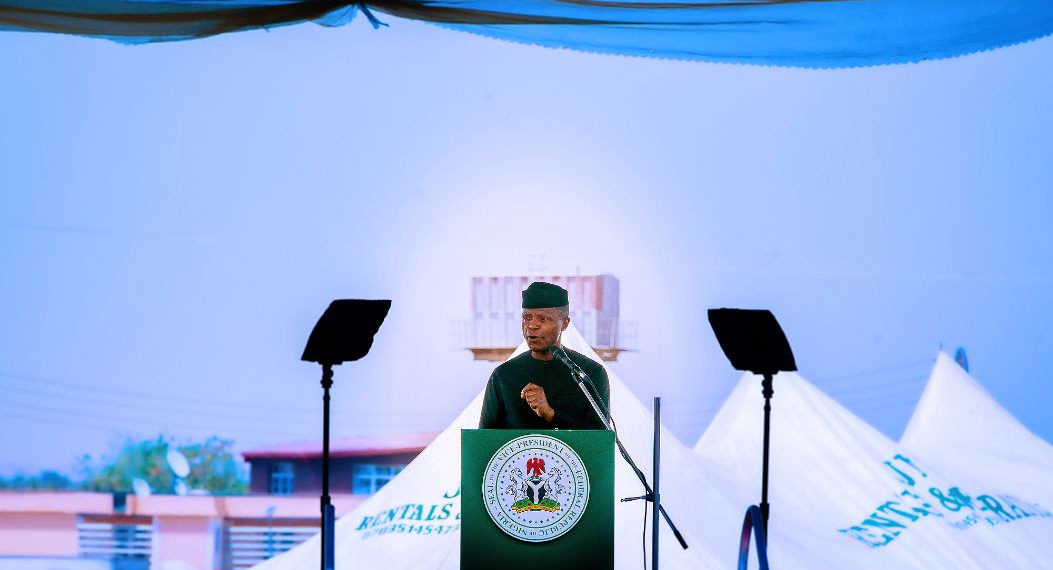 How to achieve a united Nigeria – Osinbajo

The work that must be done in the continuous pursuit of Nigeria’s unity includes the “hard work of ensuring justice, equity and fairness for all segments of society,” according to Vice President Yemi Osinbajo.

Mr Osinbajo made the point today while delivering the Convocation Lecture of the Sokoto State University.

The vice president who was received at the airport by Governor Aminu Tambuwal of Sokoto State, also paid a courtesy call on the Sultan of Sokoto, Muhammad Sa’ad Abubakar.

The Sultan welcomed him noting that he knew the vice president “is here because he loves what he is doing for the development of the country.”

Emphasizing the roles that leaders must play to engender unity, the vice president in his lecture titled “Nigeria: Some Defining Issues for the Future”, noted that “we must not overlook any fears or allegations of marginalization or discrimination on account of religion or ethnicity.

“Political, especially ethnic leaders and religious leaders must do the difficult work of educating their publics about the need to live together. It is the elites, leaders that will do the onerous job of ensuring unity in our communities.”

According to Mr Osinbajo, “unity is not just a slogan or even merely a good idea. It has manifest expression in our communities where Nigerians from diverse backgrounds are commingling, trading, partnering, inter-marrying and blending in various ways.

“We live in a complex web of multi-layered social, cultural, economic, and political synergies playing out in every sector of our individual and national lives. Despite the scale of the challenges facing us, unravelling this web of commonality as proposed by enthusiasts of disintegration is a cure that is worse than the disease.

“This is why we must understand that even though managing diversity can be politically and administratively onerous, diversity itself is an economic strength and harnessing it properly is hugely rewarding.”

The vice president further stated that if properly harnessed, a country’s diversity could ensure lasting prosperity for all.

“It is a matter of interest that the most prosperous economies in the world are typically diverse places. Because the true wealth of nations in the 21st century is human capital, societies that set out to attract and retain the most diverse pool of skilled human resources are ordained to prevail in the race for prosperity.

“With diversity comes a broad range of cultural, philosophical and intellectual approaches for solving problems. Innovation can only flourish in this kind of setting. This is why we must understand that even though managing diversity can be politically and administratively onerous, diversity itself is an economic strength, and harnessing it properly is hugely rewarding,” Mr Osinbajo added.

Speaking against the call for Nigeria’s disintegration, the vice president called citizens to consider the importance of national unity, stressing that the country “is more than a sum of its many parts and its diversity – ethnic diversity, cultural diversity, religious diversity – is a value-add for our nation. Difference should not mean division”.

On the way forward, Mr Osinbajo, a law professor, noted that “it is essential for us to establish a culture of tolerance, open-mindedness and acceptance of people of all cultures and creeds. There is unity to be found even in the face of such differences.”

“There is a Nigerianness that binds us all, there is a shared commitment – no matter how suppressed – to build a better Nigeria for ourselves and future generations. It is who we are, it is in our very beings, that love of country, that aspiration to do better.”

Justifying the need to adopt a decentralized policing system, Mr Osinbajo said given the country’s size, growing population, and emerging concerns, the old system was no longer fashionable.

His words: “It is clear that our centralized model of policing, which was entrenched when the country was less populous and less complex is not capable of addressing the challenges of a 21st-century society in the throes of fast-paced changes.”

“The time has come to evolve a decentralized policing model that will operate along state and local lines. I believe that there is an emerging consensus on this issue. There are a number of proposals for the establishment of State Police entities before the National Assembly.

“The Nigeria Police Force has also commenced implementation of its community policing programme. Taken together these initiatives indicate a growing realisation that policing and security management should be more localized and entirely centred around the public safety needs of our communities,” Prof. Osinbajo submitted.

Citing the resolutions of the National Economic Council in addressing challenges relating to security, climate change, among others, the vice president stated that governments across different levels was committed to resolving the issues.

“Political leadership obviously has a role to play in the all-important task of securing our people. On 18th February this year, at the meeting of the National Economic Council (NEC), which I chair monthly, State Governors agreed to a set of principles to guide the approach of State Governments to peace and security issues.

“Among other things, the Governors committed to ensuring the arrest and prosecution of the perpetrators of crime, to collaborate with federal authorities to reconstruct destroyed homes and pay compensations where appropriate for damage to properties and livelihoods during targeted attacks on communities as well as the unequivocal condemnation of manifestations of hatred, hate crimes and related violence against communities,” the vice president disclosed.

On the implementation of the National Livestock Transformation Plan, the vice president assured that the NLTP “will bring an end to the farmer-herder conflict as the goal is to make livestock breeders more sedentary and ranching rather than random grazing is central to the new plans. This approach will lead to high yield in dairy and meat, and ultimately greater financial benefits.”

While thanking the vice president for honouring the invitation to deliver the lecture, Governor Aminu Tambuwal said the submissions made by Mr Osinbajo were apt, noting that education, the security of lives and property and the unity of Nigeria were the most important issues that should bother every Nigerian as clearly enunciated in the lecture.

He said: “I have always said that education is the key to everything in our country. With it, we can address poverty, insecurity, poor health indices and many other problems affecting us. We must not play politics with the security and unity of this nation, this I have also emphasized.

“We must all close ranks to address these issues as clearly observed by the Vice President. And there is no better person to have put these issues before us than Prof. Osinbajo.”

Aside the convocation lecture, the vice president also inspected a number of state projects including the 950-bed State University Teaching Hospital.

Other guests at the Convocation lecture include Sokoto State Deputy Governor, Manir Dan’iya; Sultan of Sokoto, Muhammadu Sa’ad Abubakar III; members of the Sokoto State Executive Council, the Legislature in the state, among others.