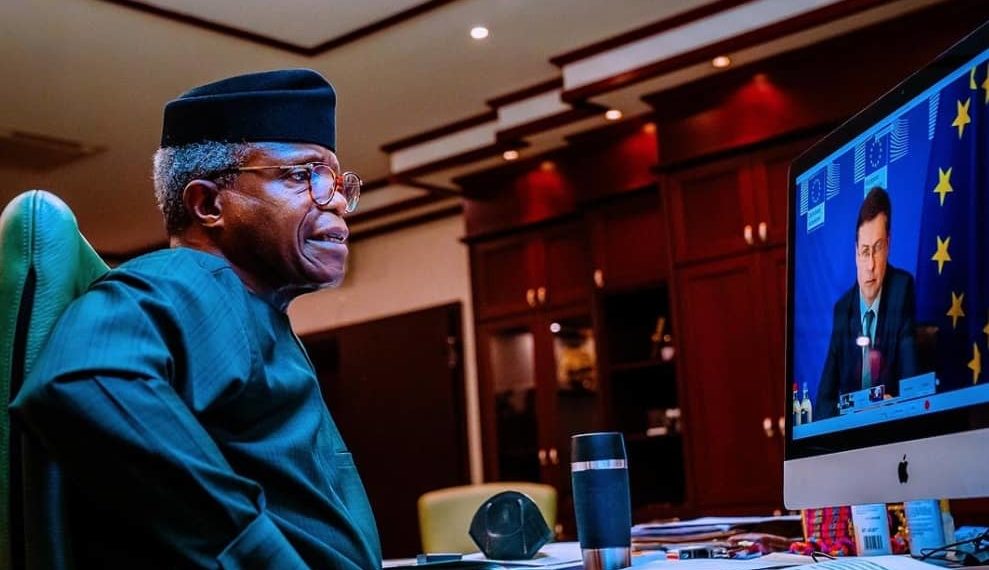 President Yemi Osinbajo during a meeting with a delegation of the European Union (EU) [PHOTO CREDIT: @ProfOsinbajo]

“A just transition to net-zero emissions, probably one where gas as a fossil fuel is still supported, especially for those of us in this part of the world, is absolutely important."

“A just transition to net-zero emissions, probably one where gas as a fossil fuel is still supported, especially for those of us in this part of the world, is absolutely important, especially as it will enable us to phase-out more polluting fuels such as coal and diesel,” according to Vice President Yemi Osinbajo.

Mr Osinbajo made the submissions Tuesday during a meeting with a delegation of the European Union (EU) led by its Executive Vice President, Valdis Dombrovskis, maintaining the advocacy that the international community should preserve financing for gas projects in Nigeria and other developing countries, during the transition to net-zero emission.

According to the Vice President, “a point which I think we can talk about is the sort of support that we hope to get from the EU especially with respect to ensuring that we meet our commitment to net-zero emissions by 2050.

“Our commitment to energy transition is firm, and we think that for us, it is an area of comparative advantage. So, we are hoping to leverage that. I think that we will again be very happy to work on improving the investment environment to ensure that we are able to work as much as possible with the EU partners.”

Emphasizing the need to leverage opportunities to build a stronger partnership with the EU in the gas sector, the Vice President said Nigeria will explore the caveat in the EU green energy financing instrument to seek better ways of financing for gas projects in the country.

He said: “What we see is a growing trend among development financial institutions to withdraw from fossil fuel investment and recently, the World Bank’s decision to cease funding for upstream oil and gas development. The new restrictions on financing downstream developments appear to be considered by some countries in the West.

“We believe that well-intended as some of these actions may be, it is clear to us that they would disregard the importance of gas as a means of urgently addressing energy poverty for us and countries such as ours.”

Mr Osinbajo recently has been raising the issue of financing of gas projects in Nigeria and other developing countries, advocating for more effective engagements since the campaign for the Net-Zero Emission by 2050 resumed.

At a meeting with the British Member of Parliament and COP26 President-Designate, Alok Sharma, last month, Mr Osinbajo restated Nigeria’s support and commitment to the Climate Change agreement but cited the planned restrictions on financing of gas projects in African countries as a potential setback.

He also referred to the National Livestock Transformation Plan (NLTP), a federal government initiative to address one of the fallouts of climate change, promote sedentary livestock farming and address clashes between herders and farmers.

ALSO READ: Nigeria plans 30% of its electricity from renewables by 2030 – Osinbajo

On his part, the Executive Vice President of the EU Commission, Valdis Dombrovskis, spoke on the importance of reviewing investment agreements between Nigeria and the EU, disclosing the commission’s plan to increase its external investment capacities.

On the vice president’s call for sustained financing of gas investments in the country and beyond, the EU chief said the decision to phase out investments in fossil fuels was in line with the organization’s policy on promoting green energy initiatives.

He however urged authorities in the country to explore the caveat in the financing instruments to seek other ways of attracting investments for projects in the gas sector.

Officials present at the meeting include the Ministers of Foreign Affairs, Geoffery Onyeama; Industry, Trade and Investment, ONiyi Adebayo; EU Ambassador to Nigeria and ECOWAS, Ketil Karlsen; and the Executive Secretary of the Nigerian Investment Promotion Commission, Yewande Sadiku, among others.

How Buhari can end mass kidnapping of students – CDD