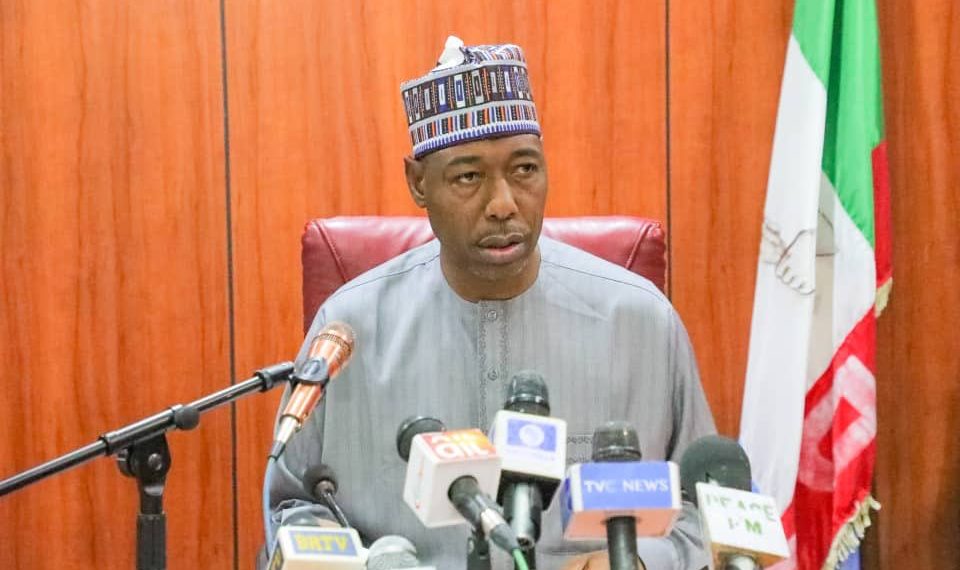 No reason was given for the sack of Mr Kwaya-Bura, who was the chief medical director of the state Hospital Management Board before his appointment as commissioner.

Isa Gusau, the special media adviser to the governor, said Mr Kwaya-Bura’s sack was part of a move to reposition the health sector.

The sacked commissioner was the secretary of the state COVID-19 high-powered task force.

Though the deputy governor, Umar Kadafur, is the chairperson of the COVID-19 committee, Mr Kwaya-Bura had on various occasions acted as the head of the committee.

“Governor Zulum’s directive was part of the necessary measures to reposition the ministry.

“Governor Zulum expresses gratitude to Dr Salihu Kwayabura for his immense contributions to the development of Borno’s public health sector in nearly two years of the current administration, and the years he had served under the previous administration.

“Governor Zulum has directed his chief of staff, Professor Isa Hussani Marte, who is a professor of pharmacology, a fellow of the Nigerian Academy of Science with a speciality in cancer research, to oversee the state’s ministry of health pending the appointment of a substantive commissioner,” the statement said.

Kwaya-Bura speaks on his sack

Sources familiar with the development said the sack of the commissioner may not be unconnected with recent employments the state made in the health sector.

The state government had last year employed 694 doctors, nurses and other health workers to boost the lean workforce in the sector.

A source at the ministry of health told PREMIUM TIMES in confidence that “Dr Kwaya-Bura was accused of favouring more of his people in the southern part of the state than other zones in the list the governor approved for employment.”

The source quickly added that “to be fair to the Commissioner, he considered credentials above political and geographic spread.”

Some other sources said the alleged lopsided employment might have been the last straw that broke the camel’s back.

“There have been concerns that the funds released for managing COVID-19 in the state were not utilised to the satisfaction of the governor who had since sealed up funding for the Committee.

“The Committee was subjected to secret investigation after which some members were cleared. Though Dr Kwaya-Bura was the secretary, it is not clear if he was the only one that was allegedly found wanting in the said mismanagement of COVID-19 funds,” the source said.

But the former commissioner who spoke to a few journalists on phone said his sack was neither related to politics nor the COVID-19 Committee.

“I never knew that I would be appointed commissioner but it happened and from that day I knew that one day I will leave this position like many others who had served and are no longer occupying, just like me today,” he said.

“This is life and is but a scene, someone will come and play his part and leave. I believe this is what happened and the governor of Borno State in his wisdom took such decision today.

“If there are any reasons alien to normal administrative changes, the government would have made it known since the press release informing the relieve of my appointment comes from the government.

“I do not believe that this is political or anything to do with my role in the Covid-19 team as being speculated because I am a professional medical person and I will continue to play a vital role in the administration of good health to Borno State.

“When things happened like this, there are a lot of rumours but I am still with the government and remain professional in my chosen field as I said. I will continue to help the state and give advice where necessary and whenever I am invited to do so.

“I believe I have a higher calling that informed this shift. After all, we have faith that it is Allah who appoints one and at the time he so wishes,” said Mr Kwaya-Bura.

Governor Zulum’s directive that his Chief of Staff should immediately take over supervision of the ministry of health pending the appointment of a commissioner has also set tongues wagging.

The governor had last year, in a controversial circumstance, sacked the chairperson of the hospital management board, Abba Masta, without giving reasons for his sack.

Mr Zulum has special advisers in every ministry. Many had expected that in events like this, the adviser, who is also a professional, would supervise pending the appointment of a new cabinet member.