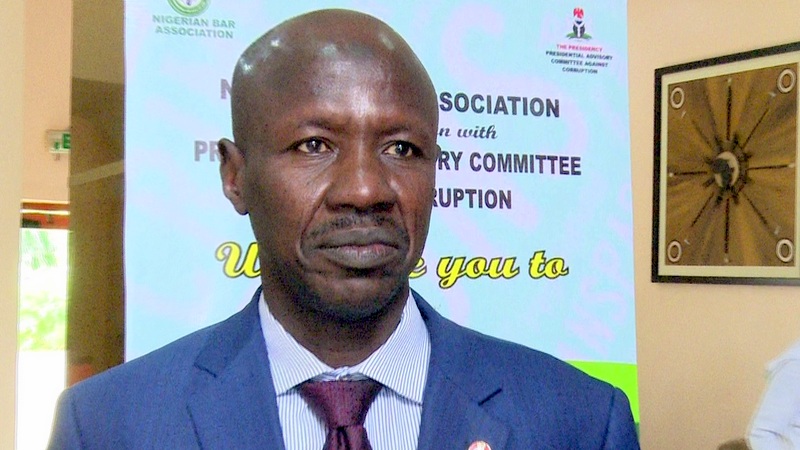 The groups said the failure of the federal government to release the report on Magu suggested that the whole exercise was witch-hunting.

President Muhammadu Buhari has been asked to release the report of the judicial panel on the former Acting Chairman, Economic and Financial Crimes Commission, (EFCC), Ibrahim Magu.

In a letter addressed to the president, the world’s leading anti-corruption coalition expressed deep concern that the political interference in the operation of EFCC and inability of the Nigerian authorities to release the report was partly responsible for the recent drop in Nigeria’s anti-corruption rating by Transparency International.

The groups, HEDA Resource Centre, Global Witness, Re:Common and The Corner House, said the failure of the federal government to release the report suggested that the whole exercise was witch hunting.

The groups said over seven months since the judicial panel chaired by a retired justice, Ayo Salami, was established to investigate the allegations made by the Attorney General Abubakar Malami that Mr Magu had abused his office, more than four months after the panel ended its sitting, the outcome has been kept secret amidst suspicion that Mr Malami tinkered with the report.

The coalition said suspicion has been deepened that the whole exercise was aimed at halting the good work of Mr Magu who has been acclaimed world-wide as placing Nigeria on a glorious footing.

The group regretted that no charges have yet been brought against Mr Magu, whose tenure at the EFCC continues to be viewed within the international anti-corruption movement as an exemplary period that restored confidence in Nigeria’s commitment to fighting graft, nor have the findings of the Salami report been made public.

The coalition said in collaboration with other international groups, they have devoted time and energy to supporting Nigeria in its efforts to fight corrupt but have been left in despair.

“As the legal maxim goes, “Justice delayed, is justice denied”. If Magu has a case to answer, then let him be charged before a court and given the opportunity to defend himself in public. If there is no case to answer, then justice demands that he be reinstated. Indeed, every day that passes without a decision being made on his fate chips another block off Nigeria’s reputation for upholding the rule of law. This not only raises questions about Nigeria’s anti-corruption fight, but has strongly suggested to the international community that Nigeria’s fight is not, in the end, serious – that instead, progress can only be made against small targets, and that once the “important” begins to be held to account, the lackies of the corrupt will be permitted to sabotage due process, absent even the semblance of any subtlety,” the coalition stated.

The group reminded President Buhari that the world anticipate that the administration of President Joe Biden will take a renewed interest in the international fight against corruption now that the dark days of Donald Trump are over, adding that given the U.S.’s own recent experience of a serving law enforcement officer removed from office because he was unwilling to drop an investigation (in this instance into allegations of Russian meddling in the 2016 US elections), “we fully expect that law makers on Capitol Hill will be eager to ensure that similar abuses of power do not hamper anticorruption efforts elsewhere.”

The coalition said it has no doubt that, unless swiftly resolved, the vendetta that the Attorney General of the Federation, Abubakar Malami, has waged against Mr Magu will likely be a focus of interest. Nigeria has a reputation to protect now more than ever before.

“For the sake of Nigeria and the reputation of your presidency, we again unequivocally urge you to weigh in and see that justice is not only done but, seen to be done in this matter” the group stated.

How National Assembly ‘padded’ 2021 budget with over N500 billion