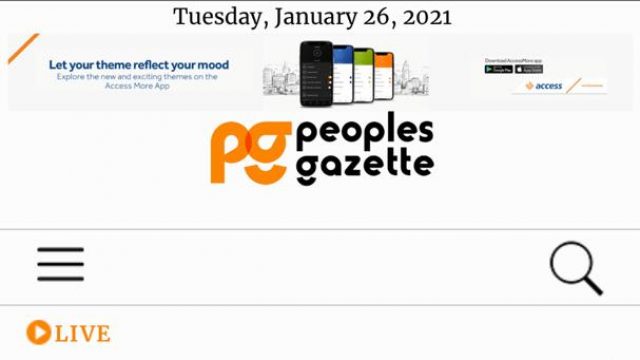 "Our internal assessments and notes from our readers indicate a total restriction on our website for people connecting via MTN, Glo Mobile and Airtel."

Peoples Gazette, an online news platform, has changed its web address following accusation that the federal government connived with telecommunications firms to deny a vast majority of its readers access to its content.

Founded in 2020, the platform has been critical of government’s activities and policies.

However, on Wednesday, the newspaper alleged that the disruption, which started on Tuesday evening, was based on a directive from the Nigerian government to MTN, Glo Mobile and other telecom firms.

Its managing editor, Samuel Ogundipe, stated that the directive was aimed at blacklisting the organisation’s web address as well as all other alternative domain names.

“Our internal assessments and notes from our readers indicate a total restriction on our website for people connecting via MTN, Glo Mobile and Airtel, i.e.: a vast majority of Nigerian Internet users.”

He noted that the technical support staff members have made various efforts to create alternative channels to accessing Peoples Gazette’s content but the efforts have been consistently thwarted by the telecom firms.

Mr Ogundipe added that the organisation is in touch with some telecoms firms’ executives to resolve the disruption.

While all efforts have not succeeded, the newspaper has temporarily changed its URL from https://peoplesgazette.com/ to https://www.gazettengr.com/, Mr Ogundipe confirmed to PREMIUM TIMES on Friday.

Speaking on efforts made to find a solution, Mr Ogundipe said executives of MTN told him that the issue was beyond their control.

“They were saying we should tell our readers to reconfigure their gadgets to their private server. We’ll rather change our web address temporarily than do that,” he said.

Several rights groups and individuals have condemned the action, describing it as a form of censorship associated with the President Muhammdu Buhari-led administration.

Former Vice President Atiku Abubakar, in a statement Thursday, said the ‘technical censorship’ of the newspaper is capable of thwarting the dividends of democracy.

“I have received with concern, reports of technical censorship of @GazetteNGR, an independent online newspaper, ostensibly by agents of the Federal Government of Nigeria. This is not acceptable,” the former vice president said.

“The battle for the democracy that Nigeria enjoys today was fought and won with the Nigerian media standing in the frontline against anti-democratic forces,” he stated

Reporters Without Borders (RSF), a global movement that advocates press freedom, urged internet providers not to be complicit with the government.

“#Nigeria : news website @GazetteNGR is inaccessible & was very likely blacklisted after its investigative reporting. @RSF_inter strongly condemns this action and calls on internet providers @MTNNG @GlobacomNigeria not to be complicit with censorship. cc @NigeriaGov @DrIsaPantami,” the organisation wrote on Twitter.

When contacted, the spokesperson of the Nigerian Communications Commission (NCC), Ikechukwu Adinde, said the regulatory agency is not aware of Peoples Gazette’s plight.

“Why will the government do such? I am not aware as a person and the NCC as a body is not too,” he said on Friday.

Also, the spokesperson of MTN Nigeria, Funso Aina, refused to respond to this newspaper’s enquiries after the intent of reaching out was disclosed.

Likewise, telephone calls put across to two presidential aides, Garba Shehu and Femi Adesina, to get the reaction of Mr Gambari were not responded to.

I will sign death warrant for convicted kidnappers – Lalong