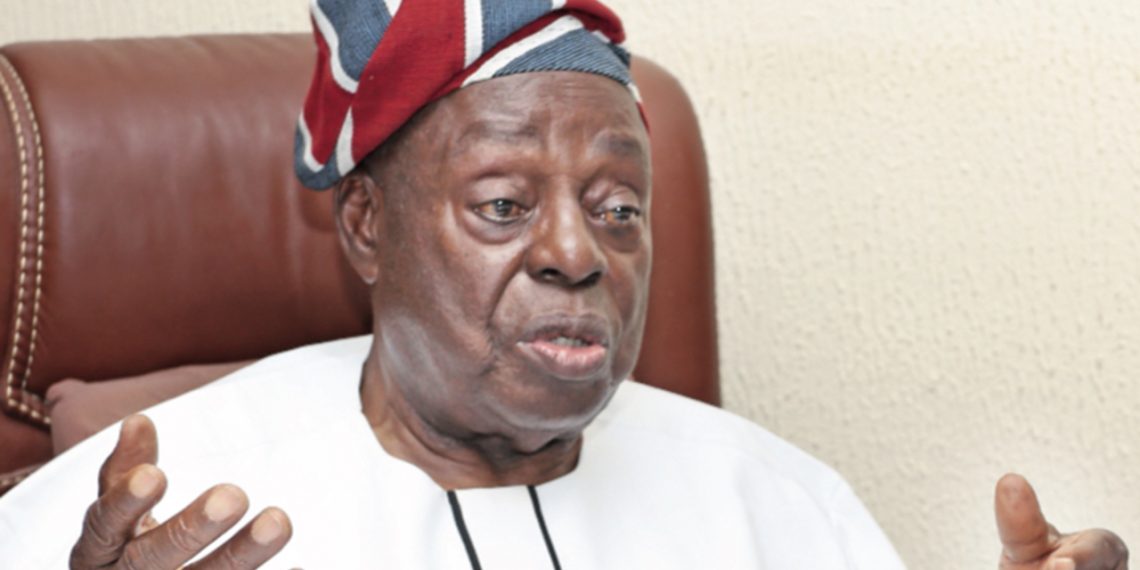 Mr Babalola wants the government to pay the salaries of lecturers in private universities shut down because of COVID-19.

Afe Babalola, a senior lawyer and founder, Afe Babalola University, Ado Ekiti, Ekitii State, Wednesday, advised the federal government against repeated or indefinite closure of Nigeria schools as a result of the coronavirus pandemic.
While addressing a news conference in Ado Ekiti, Mr Babalola said waiting indefinitely for COVID-19 to go was dangerous as the pandemic might last for another one year globally.

He said mass closure of schools, especially universities, without consideration for schools known to be outstanding in the possession of best of facilities capable of putting the virus at bay was not good for intellectual growth and human capital development of the country.

He described such scenario as not only at variance with what obtained in the development world but also unconstitutional and disastrous.

Mr Babalola. was reacting to a statement credited to the Minister of Education, Adamu Adamu, that the January 18, earlier set by the federal government for schools resumption might be reviewed.

Mr Adamu had said on Monday that the January 18 resumption date for schools was not sacrosanct because of the surging cases of COVID-19 in the country.

However, Mr Babalola, a Senior Advocate of Nigeria (SAN), said such action could turn out to be counter-productive to the education sector, especially at the private school level.

He said government should not contemplate deferring resumption of schools any further after the earlier scheduled January 18, because of its grave consequences on the wellbeing of the nation.

He also urged the government to emulate other foreign countries by paying the salaries of lecturers in private universities shut down because of COVID-19.

According to him, these institutions are monthly incurring huge bills on their workers for jobs not done while their expensive equipment keep wasting away.

“I am of the firm view that mass closure of schools is both unconstitutional, disastrous and counter productive.

“It is certainly unjust to the parents, teachers, students and proprietors of schools and also violates the rule of natural justice.

“All universities, particularly private ones that have the required world class health facilities like in our case and had complied with every of PTF regulations which will enable them to implement low-medium risk measures ought not and should not be shut down.

“If the private universities which fall within the category of minimum risk have to wait for their counterparts in the public universities to resume, then no university will resume until the virus is completely eliminated, which is not feasible in the next one year,” he said.

Mr Babalola disclosed that the U.S. Centre for Disease Control and Prevention supported this when it officially recommended that universities should be accorded preferential treatment under COVID-19 in terms of operations.

He said should the low-risk private universities remain shut down to wait for high-risk public universities, it would make the ivory towers remain comatose for long.

On whether his declaration that the schools’ closure was illegal meant that he would sue the government, Mr Babalola said he was not contemplating such a stand.

“I am not going to court, because we have not exhausted the option of negotiation and local remedy.

ALSO READ: #EndSARS: What Buhari should do to end crisis – Afe Babalola

“I am a friend of the federal government and I know that the Attorney-General of the Federation will look into it.”

The National Universities Commission(NUC) had directed all Nigerian universities to resume on January 18 after the Academic Staff Union of Universities(ASUU) called off its months-old strike demanding improved welfare package, improved earn allowance, among others, from the FG.

However, ASUU National President, Abidoun Ogunyemi, has advised the FG to review its stance on the January 18 resumption date.

Mr Ogunyemi said most of the schools do not have the wherewithal to enforce compliance with established safety protocol to curtail the spread of COVID-19 in the country.

Nigeria is currently experiencing an upsurge in the number of active cases of the pandemic.

Nigeria to participate in African Weightlifting Championships in Mauritius