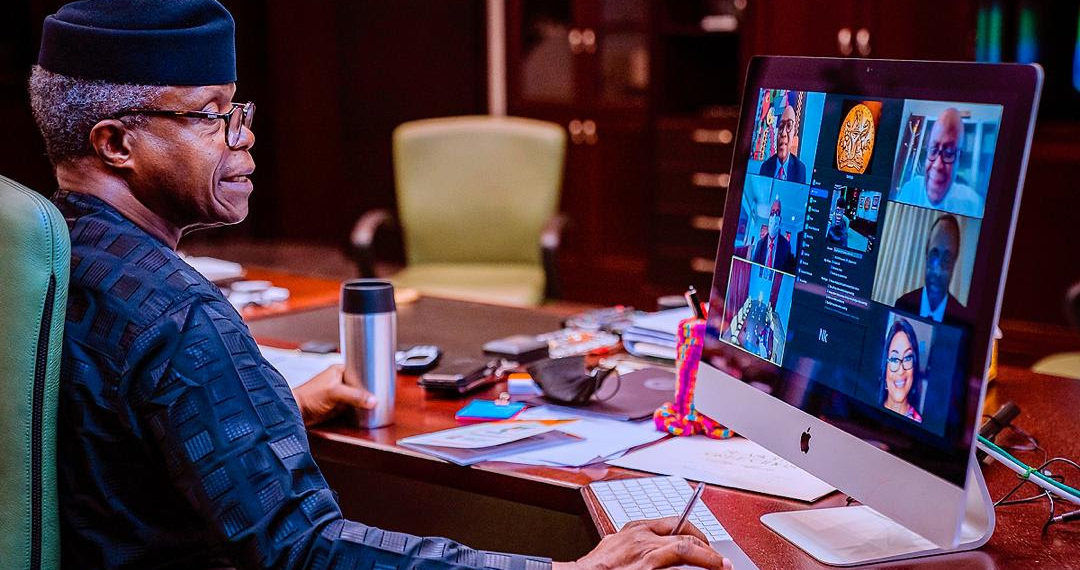 Vice President Yemi Osinbajo, SAN, speaking while being briefed on the report by a team of scientists. 11th January, 2021. (Photo Credit: Tolani Alli)

The team is composed of LUTH and Diaspora-based professors and scientists.

Vice President Yemi Osinbajo has welcomed efforts by a team of Nigerian professors and scientists investigating the effectiveness of, and roles that Ivermectin drug can play in the treatment of the Coronavirus disease.

The team, which is composed of Nigerian scholars at home and abroad, has also submitted their report on the usefulness of the drug to the World Health Organisation which has already appointed a Peer Review expert from the United Kingdom.

Speaking Tuesday while being briefed on the report by a team of scientists led by Femi Babalola, the Principal investigator, and Chris Bode, the Chief Medical Director of LUTH, the Vice President expressed excitement that Nigeria and Nigerians “are at the cutting edge of scientific research into the COVID-19 treatment.”

According to him, “we have an opportunity here and I am so fascinated to hear this drug has been used in the treatment of River Blindness in this country.”

While commending the efforts of the team, Mr Osinbajo added that with the report, Nigeria is at an advantage both in knowledge and availability of the drug, especially since Ivermectin has been found useful not only in the treatment of COVID-19, but also as a prophylactic medication.

He disclosed that the Federal Government will explore further ways to support the research for the benefit of Nigerians and humanity generally, while also advancing the effective funding of scientific research in the country.

Both Mr Babalola and the CMD, LUTH commended the Buhari Presidency for encouraging the research and thanked the Vice President for his personal role and support.

The report is titled, “A randomised controlled trial for the repurposing of Ivermectin in the management of COVID-19,” and highlights are discussed below:

The research, carried out in the Lagos University Teaching Hospital (LUTH) was undertaken following the report of a 5,000-fold reduction in viral load by Australian workers with in-vitro use of Ivermectin on COVID-19 in culture.

The PI has worked extensively with Ivermectin on the Onchocerciasis-River Blindness control programme, through which many Nigerians have used Ivermectin.

The study revealed that the mechanism of action of Ivermectin, include “Inhibiting viral entry into cells nucleus; and “Direct suppression of viral RNA load of SARS CoV 2,” among others.

Ivermectin is orally absorbed with higher absorption as a solution better than tablets, and “The Mean Residence Time” (MRT) is 3.4 days. This informs the suggested frequency of dosing, i.e. twice a week.

The research’s Null hypothesis noted that: “Safe doses of Ivermectin are not useful in the treatment of patients with virology proven COVD-19 disease, does not lower viral load, and does not shorten time to negativity, neither does it cause improvement in clinical parameters when compared to Lopinavir/Ritonavir/Placebo.”

But its Alternative Hypothesis revealed that, “Safe doses of Ivermectin are useful in the treatment of patients with virology proven COVID-19 disease, lowering viral load, shortening time to negativity, and causing improvement in clinical parameters when compared with Lopinavir/Ritonavir/Placebo.”

In its results so far, the Study noted that the randomisation was effective based on distribution of age, sex and some clinical presentation at baseline such as cough and fever.

Highlighting the practical applications, the Study proposed that “Ivermectin should be considered for adoption into the uniform treatment guidelines of COVID- 19 in Nigeria,” noting the “potential use of ivermectin as prophylaxis Pending the rollout of vaccination programs or alongside it.”

However, the Study emphasized that Ivermectin “is not meant to replace other COVID-19 measures such as social distancing, face masking and hygiene, or vaccinations,” adding that, “It is possibly an additional tool which can be deployed to fight the pandemic.”

The group stated that it has forwarded a report of its findings to NAFDAC.