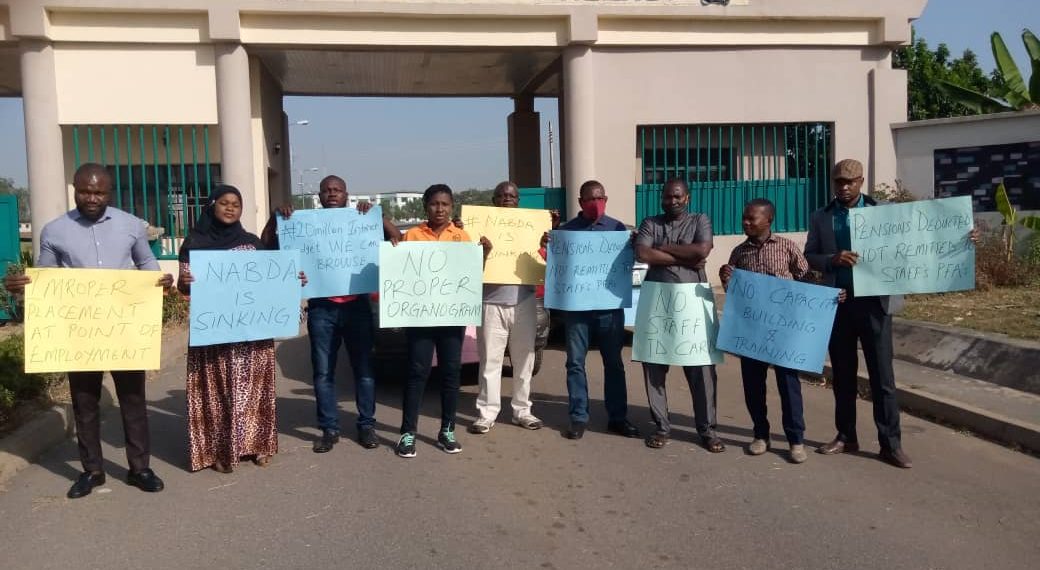 The DG denies the allegations, saying some of the issues raised by the workers are beyond his power.

Movement in and out of the headquarters of the National Biotechnology Development Agency (NABDA), Lugbe, Abuja, was on Monday impeded by the activities of protesting workers.

They blocked the organisation’s entrance gates over issues that border on unpaid promotion arrears, alleged corruption and poor welfare.

They said apart from unpaid promotion arrears of workers since 2018, promotion examination for 2019 has not been conducted to date. They added that many workers have not been promoted for many years for “unknown reasons.”

The workers also accused the agency’s acting director-general, Alex Akapan, of misappropriating funds released for the takeoff of the agency’s centres in Ekiti, Osun and Enugu States.

They said the development, which resulted in delayed salary payment, also informed Mr Akpan’s invitation by the Independent Corrupt Practices and other Related Offences Commission (ICPC).

But the DG has denied the allegations, saying some of the issues are beyond his power to handle.

Speaking on behalf of the workers, the vice-chairman of the chapter’s ASURI, Gbenga Ogunmefun, said the agency has ‘no leadership structure’.

He said apart from an acting director-general “who has been in acting capacity for more than two years, there is no other management member in the institution’s organogram.”

“Our issues are too numerous to mention. There are cases of illegal recruitments which have created a lopsided staff capacity. NABDA has only 25 per cent of scientists and 75 per cent administrative workers. We are running a research institute without the internet, and many workers have remained stagnant without promotions for many years due to inconsistencies in policies,” Mr Ogunmefun told our reporter on the phone.

He also spoke about the agency’s establishment bill, which he noted has not been passed into law by the National Assembly.

Meanwhile, other workers at the institute have decried the delayed appointment of a substantive director-general for the agency.

They alleged that the minister of science and technology, Ogbonu Onu, has deliberately refused to announce a substantive DG for his own interest/

One of the administrative workers in the agency, who spoke with our reporter on the condition of anonymity, said almost all the agencies under the minister are embroiled in leadership crises over alleged interference of the minister.

The source said; “You should find out why the same politics playing out at NABDA is also playing out at the Project Development Institute (PRODA), Enugu. The same thing happened at the Federal Institute of Industrial Research, Oshodi (FIIRO), Lagos. All these are happening because the minister wants to impose incompetent people due to ethnic biases,” the source said.

Speaking on the leadership crisis, another staffer of the agency, who also does not want to be named, said; “both written examination and oral interviews were conducted between March and April in 2019 for the applicants to the position of the DG. Three of the best candidates were chosen but because the incumbent acting DG, who is the minister’s man did not even rank 10th, he has been left to be acting since then.”

The source alleged that the office of the Secretary to the Government of the Federation (OSGF) recently wrote to the minister to implement the recommendations of the board based on the result of the examination. “But instead of doing that, the directive has been ignored by the minister.”

Another worker said; “Since August, he (the acting DG) has been visiting the headquarters of ICPC over an allegation of fraud. The development has also led to non-payment of salaries in some centres. We have not received October salary now while those at our centres in Odi, Bayelsa State, in particular, have not been paid since July.”

Issues are being addressed –DG

Meanwhile, the acting director-general has blamed the coronavirus pandemic for the delay in the conduct of the 2019 promotion examinations.

Speaking on the phone with our reporter on Monday afternoon, Mr Akpan said November 23 and 24 have been fixed for the promotion examination, and that he would disclose this to the protesting workers when he addresses them.

“I’m going to address them now. The management and the establishment unit of the ministry have fixed dates for examination. And for the promotion arrears, we have a shortfall in our subvention and until such is addressed, there is no way we could address the matter. It is not peculiar to us at NABDA,” he told our reporter.

He said his agency “has achieved so much, and that those who envy his achievements within just two years in office are those behind the protest.”

He listed his achievements to include the production of genetically modified cotton with about 4.5 tons per hectare instead of the earlier 250 kilogramme per hectare.

“We have also developed the BT cowpea, which is an affordable source of protein for Nigerians since meat is costly for many families.

“You know we have too many administrative workers who are jobless. They constitute 75 per cent of our staff strength. So they have time to gossip,” he added.

But when asked about his invitation by the ICPC, Mr Akpan simply said; “I cannot remember if I was invited.”

Meanwhile efforts to get the reaction of the minister were futile as he neither picked his call nor replied to a text message sent to him.

The ministry’s permanent secretary, Sunday Akpan, who is the incumbent chairman of the governing board of the agency, also did not pick his phone when called. He did not also reply to a message sent to his phone.