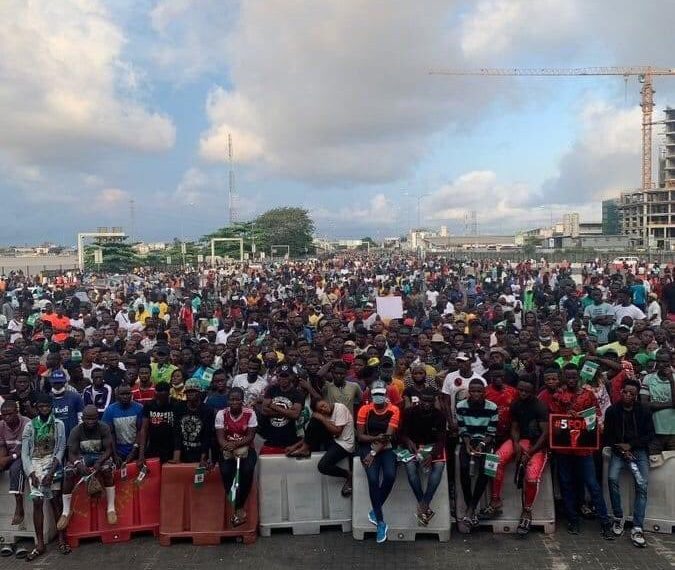 This report draws 10 major reasons why the #EndSARS protests attracted attention and perhaps forced the government to take action.

Protests against police brutality were held for weeks in various parts of Nigeria in October with the theme #EndSARS.

The protest began with a demand for an end to criminality by security operatives and the dissolution of the now-defunct Special Anti-Robbery Squad (SARS) of the Nigerian police. It later led to the demand for better governance and institutional reforms.

Officers of the police unit were accused of extortion, abuse of fundamental human rights of suspects, and extrajudicial killings.

The case that triggered the protest was the alleged shooting of a young man in Ughelli, Delta State by police officers. Although the police said the victim did not die and that the officers involved in the incident were not of SARS, angry youth stormed the streets to demand an overhaul of the police force.

Dozens of people, including protesters and police officers, eventually died in the violence that followed the protests.

The worst case of heavy-handed response to the protest by the authorities occurred on October 20 when military men shot at protesters at the Lekki toll gate in Lagos. While witnesses said many were killed, the state government said only two people died.

Hoodlums later hijacked the protest, leading to further killing of police officers and attacks on public and private property, including police stations and prisons.

Nigeria has witnessed numerous protests in the past. However, the #EndSARS protests attracted massive national and global attention with numerous political, business, entertainment, and religious leaders and organisations across the globe lending their voices to the campaign.

It also forced the Nigerian authorities to reach prompt concessions and quickly agree to most of the demands of the protesters.

This report examines 10 major reasons why the #EndSARS protests attracted attention and perhaps forced the government to take action.

The genesis of the successful outing for #EndSARS protest was the unity of purpose of the protesters. The outcome of the protest validates the popular saying that “United we stand, divided we fall.”

The last time such happened in Nigeria was in 2012 during the fuel subsidy strike under the administration of President Goodluck Jonathan. Even at that, one could argue that the 2012 protest was more prominent in Lagos, and Federal Capital Territory.

Historically, various protests have held including that of ASUU, NLC, pensioners, and student groups but none has perhaps gained the attention the latest #EndSARS demonstration recorded.

Despite the fact that the struggle was championed by mostly educated youth, many people in the entertainment industry, and other fields joined in.

In some cases, parents and grandparents were seen on the streets calling for an end to police brutality. This may not be unconnected with the fact that many homes in Nigeria have victims of police brutality.

2. Use of social media

The impact of social media during the struggle cannot be left untold. The protest was able to reach the international community due to the active mobilisation of protesters and through this, the #EndSARS hashtag garnered more tweets than the #BlackLivesMatter outcry.

As the trend grew online, the more people were energised, the more tales of agonies and encouragement amplifying the demands of the agitators.

Although there were cases of dis/misinformation, social media strictly helped to revolutionise the movement.

A week after the protests commenced, private organisations were running helter-skelter to ensure that the protesters leave the major roads, but that failed.

All forms of business were down posing danger to the economy of the nation. As part of efforts to reduce the effects of the roadblocks, some business tycoons selected some supposed leaders of the protests for a zoom meeting. They also urged the government to attend to the demand of the youth.

Other concessions the government quickly made to the protesters are regular communication with citizens to establish trust and confidence, road map for the implementation of the White Paper of the Presidential Panel on the Reform of the SARS, setting up of judicial panels of inquiry by state governments into cases of alleged violations of human rights by SARS and other units of the police and call for memoranda from members of the public whose rights have been violated by the defunct SARS and the police.

Unarguably, the absence of a formal leadership structure made the protests last for more than the period anyone could have thought. Ordinarily, in the history of Nigerians, leaders of struggles meet with the authorities and after discussions, most times, they usually reach concessions that end such protests.

In the case of #EndSARS protests, nobody nor group had the monopoly of power to ask protesters to stop demanding. When musician, Naira Marley, said he was no longer leading the protests, many Nigerians still went to the streets.

Even when an influencer, Segun Awosanya, claimed not to be involved in street protests, the protests continued. On the flip side, it also made the agitation drag further as the government had no one to negotiate with.

Analysts argue that if the protests were funded by any political party and group of political parties, the agitators would have long lost their strength. It would also have been easy for the government to say the agitations were politically motivated.

The protesters verbally attacked the opposition and the ruling party while demanding an end to police brutality and were not even impressed when two politicians, Omoyele Sowore and Atiku Abubakar tried to gain ‘political mileage’ by identifying with the agitation.

The refusal of President Muhammadu Buhari to directly address the protesters apart from a few press statements also added to the determination of the protesters to stay on the streets and aided calls by global leaders to call out the president, who eventually caved into the request, albeit after the fatal Lekki shooting.

The protesters had asked for their President with the hashtag #WhereIsBuhari.

With Nigeria labelled the “poverty capital of the world,” many citizens are frustrated and would do anything to change their situation. These served as the fodder that added to the ranks of the protesters.

Protesters with no food at home were fed at the barricades.

The coordination of the protests was superb. Although there was no leadership structure, different teams carrying out various responsibilities such as medical, fitness, legal, and transportation services assisted the protesters and made the agitation unique.

For instance, a Go-Fund was set up for a physically-challenged protester who took part in the protest.

10. Support from Nigerians in diaspora

The protest also gained global attention following the reported support of Nigerians in diaspora, who reportedly sent in donations that could not be easily tracked

International communities were also able to know about the protests through similar agitations held by Nigerians living abroad.

Speaking on other reasons for the uniqueness of the protests, Adeshina Ogunlana, a legal practitioner, said “the protests were relatively successful because the economy and security of the nation are badly run and people were tired. They wanted a radical change of the system.”

“More so, the way COVID-19 was managed also increased the agony of people. The youths were reacting to misgovernance like never before but the government underrated thinking it was not going to last long. The persistence then led to success.”

A public affairs analyst, Seyi Odunsi, said “the fact that most Nigerians are now interested in what matters most to them helped the protesters achieve some level of success”.

“People wanted to be part of government and governance. They wanted to be sure of what the future holds for their kids. People were able to speak loud knowing fully well that they elected their leaders and they were ready to hold them accountable,” he said.